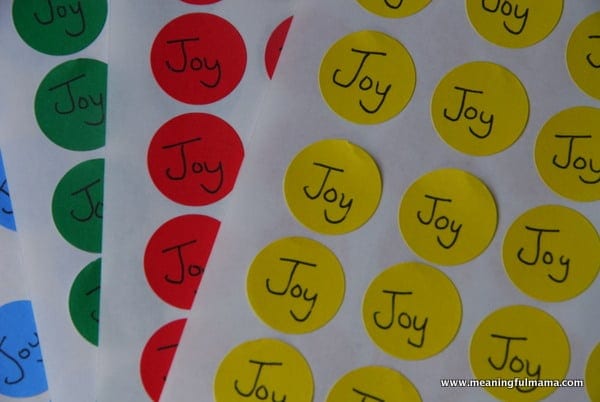 Joy is Contagious Game
As I was reflecting on the fact that joy can be contagious, I decided I wanted to come up with an idea, craft or an activity that reflected that. I came up with a version of tag I thought would be fun. 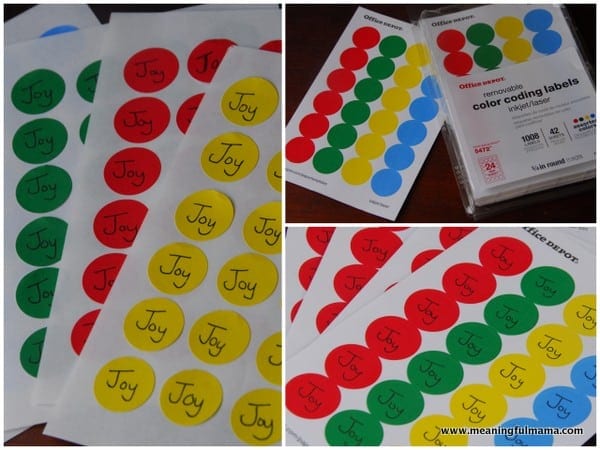 I had some garage sale type stickers left over from our dot sticker art. I wrote joy on four sheets of stickers. Then, I removed the stickers and re-arranged them so that one sheet had all yellow, one had all blue, one had all red and one had all green (note…this was one my mistakes).

Each child received a sheet of stickers. I talked about the concept of what “contagious” means. We then had a discussion on how it relates to joy. The rules of the game are that you chase people around for one minute trying to stick a joy sticker on them. At the end of the minute, we stop and see who was able to spread the most joy by adding up the stickers of their color. Great concept, right?

OK – so what went horribly wrong? I guess a good indicator of how an activity might go is when it takes the kids 20 minutes to figure out how to get out of the house even though they were already in jackets and shoes. If one child decides to change shoes and can’t decide which ones fit or what exactly what they want to wear, that’s a good indication things might be headed south. Let’s pretend that while said child is having a meltdown over shoes another child starts having a meltdown for no apparent reason, it might be a good warning sign that now is not a good time to play the game. So, I said that…”Now is probably not a good time. We can play later.” Oh, but they wanted to play so bad, so we pressed forward. Another thing that went wrong was that in transferring the stickers around to different sheets of paper, they lost their stickiness, so stickers were dropping off and falling to the floor. They wouldn’t necessarily stick to clothes. I would suggest just cutting the stickers in strips and handing the kids multiple strips. You could also use different colored sticky notes or different kinds of stickers for each child. The final blow to the game was the fact that these now non-sticky stickers were barely hanging onto their page and then we got huge gusts of winds while we attempted to play with a child who is still melting down. Well, there’s the utter disaster of the game that did not bring us much joy. The irony was not lost on us. 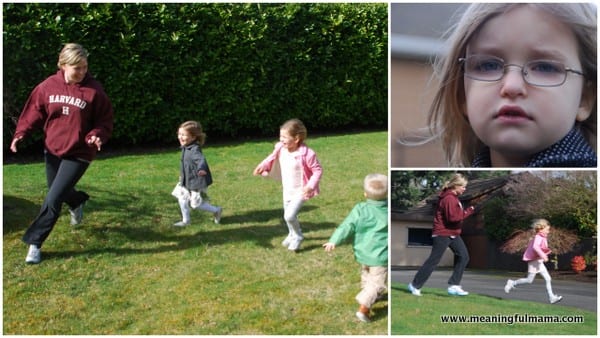 Joy is the Word of the Week

I think the idea is good, but I can agree that it could be improved or use differently.

I think this is an AWESOME idea! Great visual and active fun combined. I am excited to use this for our Awana Sparks group – I think it will be very memorable! Thanks so much!

That’s so great to hear. I hope it goes over really well. I’m glad you found me. 🙂

I love the idea, too! Your honesty about the challenges made me laugh (as a momma of little ones, I can relate), but it also helps me anticipate how to make it work. Thanks for keeping it real, and creating great resources!

Thanks so much. I rally appreciate you taking the time to comment.