Perseverance
“Do you not know that in a race all the runners run, but only one gets theprize? Run in such a way as to get the prize.” 1 Corinthians 9:24 NIV
I must apologize. I’m a day off. I was thinking this was the last day of studying perseverance, but it was yesterday. We did a perseverance activity today, and then I realized that the week, beginning today, is self control. We’ll get there. I still wanted to post the simple idea for teaching perseverance. The concept is to teach your child something new that you know might take some practice. There are a lot of ideas you could do: tie shoelaces, write letters, learn to read simple words, jump on one foot, draw an image, ride a bike, make a string friendship bracelet, knit, braid, play a simple song on the piano…you get the idea. When learning a new skill, I emphasize the 3 P’s – Patience, Practice and Perseverance. Something else to keep in mind is setting your child up for success. Choose something you really think they can accomplish. Pick something within their age and ability level. It’s not fair to push them beyond their development level, and it will only lead to frustration and tension in your relationship. Here is what we did:
Kenzie – Learning to Lace Shoes 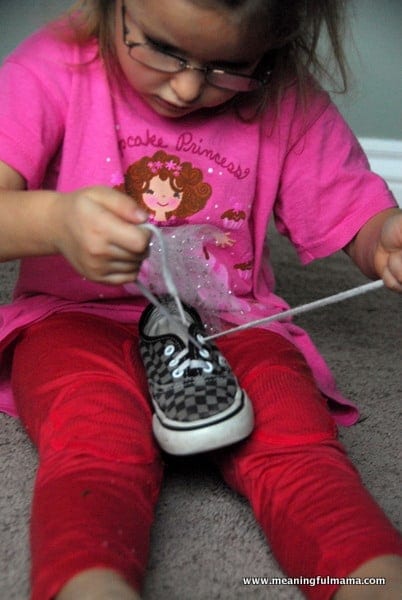 With Kenzie I decided to try lacing shoes because she hadn’t done it before. It took a bit of hand-eye coordination, but with a bit of perseverance, she was able to get there. Make sure you are a voice of encouragement and learn to describe things in different ways as you are teaching new skills. After she had mastered the lacing, she wanted to try tying bows. I felt like it was too hard for a 3 year old, but I wanted to let her try. She did quickly become frustrated with the process, and I had to explain that Abby (at age 5) just learned to tie her shoes. I had to tell her that it’s really hard and that we should just try again another day. I would let her keep trying if she had wanted, but like I said in the intro, I didn’t want her to be frustrated and discouraged by something that seemed to be beyond where she is developmentally.
Abby – Learning to Draw a Bird 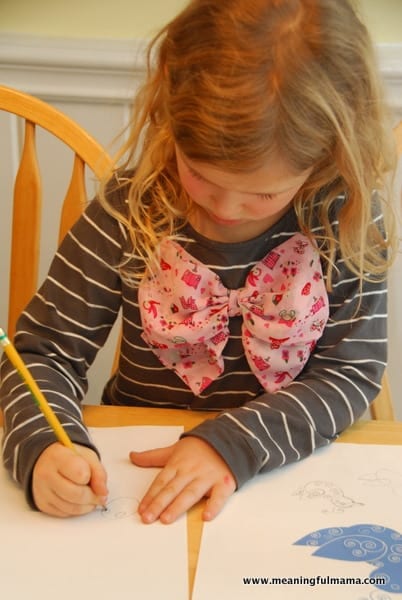 Abby wanted to draw a bird for a necklace design she is creating for Kidz Can Design, a website where you can send in your child’s artwork and they will make a sterling silver pendant of that artwork. I’ll be sharing more about that and doing a Giveaway soon. That’s something for you to look forward to at Meaningful Mama. Today, Abby had to learn perseverance while she was learning to draw a bird. I can tell you that it wasn’t picture perfect the whole time. She became frustrated. She had chosen a bird but said she didn’t know how to draw it. I said we could look at some bird drawings online. She found one she wanted to try and copy. The first attempt resulted in tears (and she tends to come with drama, so when I say tears, I mean tears) and a crumpled up piece of paper. I sent her to the stairs to get a happy heart and get under control. I seriously was not convinced we would recover. She was obviously exhausted and not handling life well. I was ready to let it go. However, she came out with self control and a desire to have perseverance. I gave her some drawing tips by showing her that a drawing is always made up of shapes. I showed her how there were circles, triangles and tear drop shapes within the drawing and tried to break it down for her. I talked about the importance of perseverance. I reminded her that she wasn’t able to ride a bike, her scooter or even walk the first time she tried. Everything takes the 3 P’s. She need to persevere through her frustration. I acknowledged that it can be disappointing and frustrating when we can’t do something right away, but how it doesn’t help to give up. If she gave up, she’d never know how to draw a bird. The next bird was a lot better. The next one was even better. Her fourth attempt was the chosen one. You saw her countenance changing, and you could see how good she felt that she was able to persevere and get it. After it was all said and done, I got down to her level, looked in her eyes and said, “Abby, I’m so proud of you for getting self control and deciding to try again. What a great accomplishment. Now you can draw a bird.” 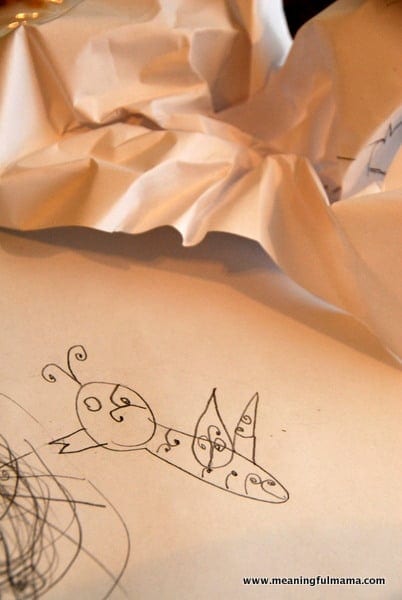