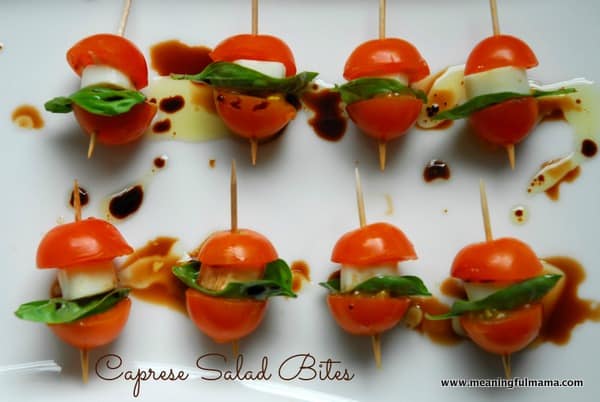 Caprese Salad Bites is an idea I came up from as I was picking tomatoes from my garden. I thought I was so clever, until I explored the internet later and discovered it has been done. Maybe I’m not so clever after all. A funny story about my little tomatoes is that I kept looking at them in the garden from afar, waiting for them to turn a bright red color. I waited and waited. No bright red tomatoes. Finally, I went closer to check the tag we left in the dirt. They are “sun gold” tomatoes. They’re suppose to stay an orange color. The pictures actually turned out more red then the tomatoes look in person. As I discovered that a bunch of sun gold tomatoes were actually ready, I began picking. Bummer that there were a lot of missed opportunities with a lot of tomatoes that had fallen to the ground. It was lunch time. I was hungry. I began to consider what I was going to do with a bunch of mini tomatoes, and I thought of caprese salad. After all, as you saw from my pesto recipe post, I have tons of basil too. It only made sense. The last thing I needed was the mozzarella. I didn’t have any on hand…or did I? String cheese. Right? That’s mozzarella. Oh sure, you could make these with a more quality mozzarella cut up nicely. However, you can also just make it work with what you have on hand. These caprese salad bites became part of my lunch that day. Yummy! They would be a fabulous appetizer at any party or get together. It is a simple, tasty and healthy bite. 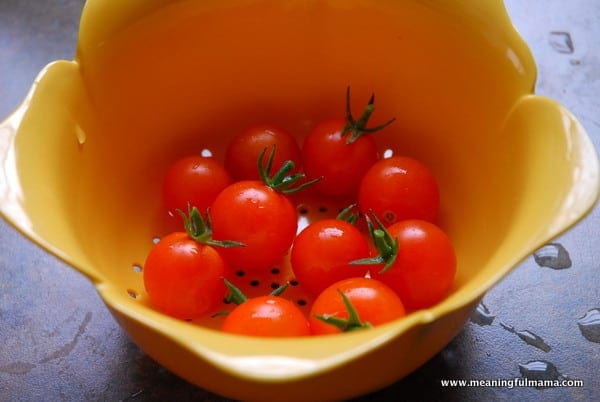 Here are my beautiful “sun gold” tomatoes. Yup, that’s what they’re called. They are a wonderful little tomato. My daughter, Abigail, loves to eat them straight off the vine. When I buy cherry tomatoes, she’ll eat half the package in a sitting. 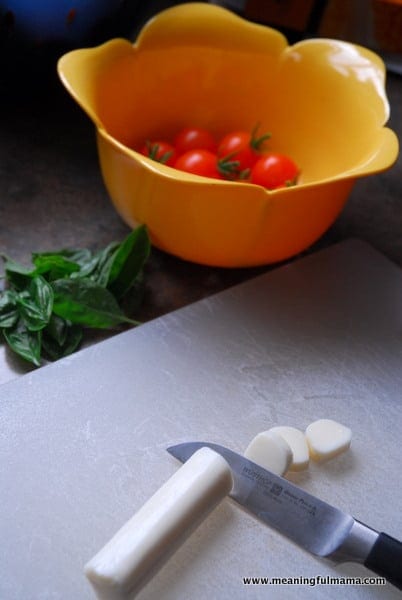 Like I said, I had string cheese on hand, so that is what I used for my mozzarella. 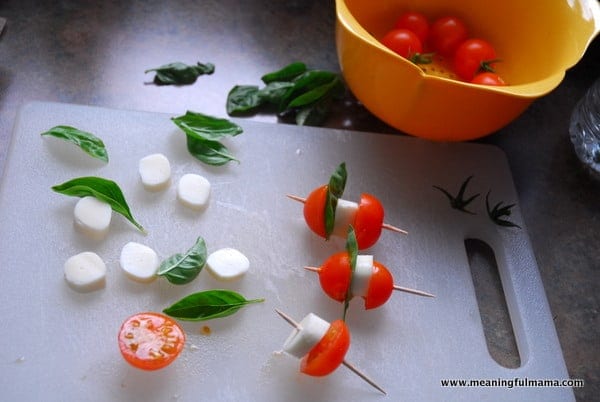 It’s easy to stack these guys up once you have all the ingredients ready. 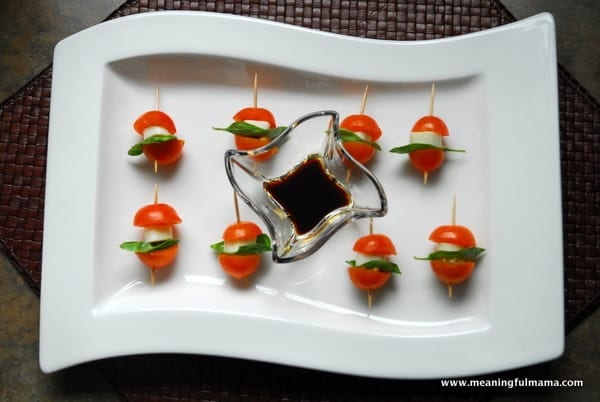 I poured some balsamic vinegar and olive oil together. You can serve these bites with the balsamic-olive oil dip or you can drizzle this mixture over the caprese bites. 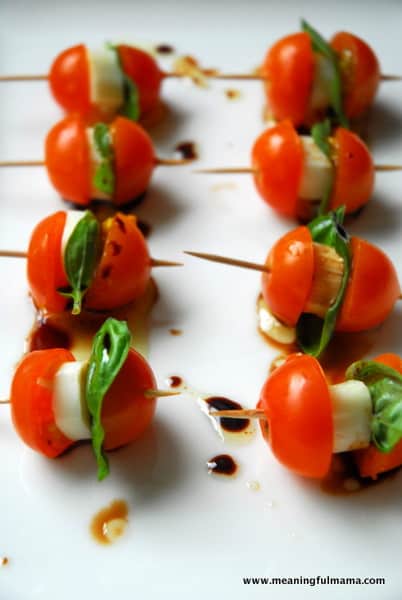 Who can turn away this healthy, colorful bite of deliciousness?

These are adorable! What a great party idea!

Thanks so much, Leslie! They were super tasty.

0
Reply
Amber @ Steps to Save

Yum! They look beautiful and delicious. I will have to make these soon. Thanks for sharing. Hope you have a wonderful weekend~

0
Reply
jodidurr
Author
Reply to  Amber @ Steps to Save

Thank you so much, Amber. It was very sweet of you to comment. I hope you are having a great weekend too.

These look delicious! I love appetizers and will definitely make this.

So cool. I’m so glad you like the idea!

Thanks for sharing this delish recipe Jodi!!

OMG, that’s an easy DIY appetizer! I will make it this halloween. Can I use cheddar cheese instead of string cheese? And how many tablespoons of olive oil and balsamic vinegar can I mix?

I would really recommend using some form of mozzarella cheese as that is the caprese salad flavor profile and pretty traditional Italian flavors. How much olive oil and balsamic mix depends on how many of the toothpicks you make up, but I would do a one to one ratio. I would start with 2 Tbsp balasmic vinegar and 2 Tbsp olive oil, drizzle and see if you need more. Thanks!

How cute! These are Perfect for an appetizer! Love it Jodi!

Thank you so much, Mackenzie. They were so simple and yummy. I had them for lunch one day, and it was great. Hope all is well!