Do you ever want to do good things for you kids “just because.” So often we want to tie special experience as a reward for behavior, a special occasion or performance. That can be OK but it can also be detrimental if done too much. We don’t want our kids to begin to think they only receive your affection and praise when they are “good.” While I am not against rewards because I think that is a part of life too, I want my kids to know I adore them no matter what – for the good, the bad, the sweet and the ugly. Sometimes, I want to do things for them “just because,” which is what the Cinderella surprise – just because – is all about. 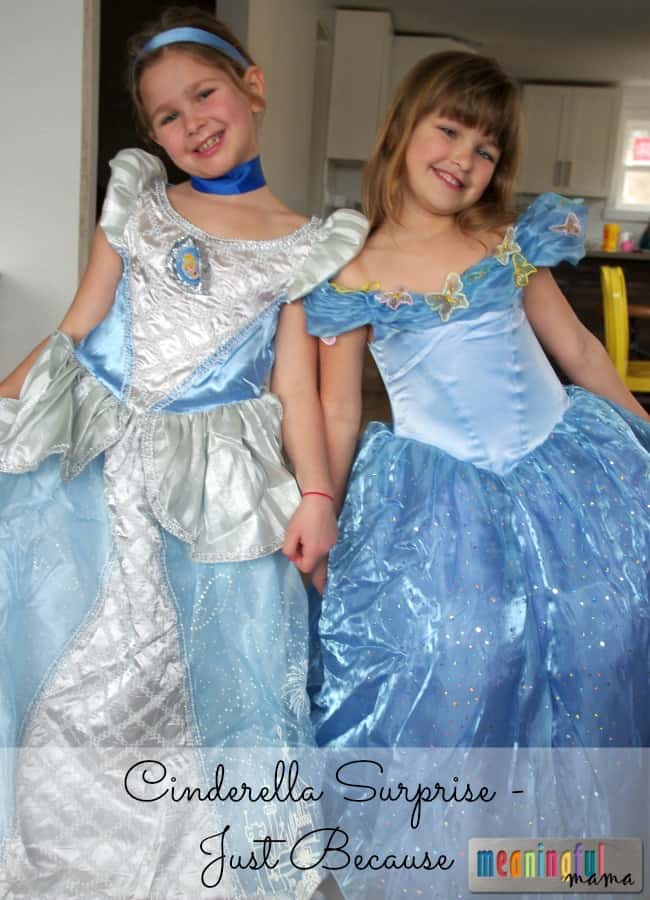 My kids love fairy tales, and Cinderella is always a favorite, right? There are reasons the story has been passed down for generations. We were excited to see the 2015 Cinderella version of this classic story. Common Sense media said that “This adaptation might be darker than Disney’s animated version, but it could also be fun for the whole family.” There are a handful of PG movies we have seen, and I was comfortable that we could talk things through if there were any concerns. I also watched the previews and felt fine moving forward to see the movie with the kids. 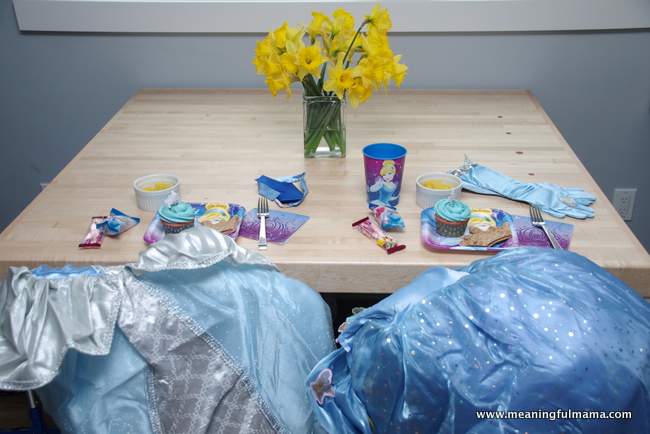 Like I said earlier, I wanted to do something special for the kids “just because,” so we decided to make an event out of it. The whole thing was a surprise. When they asked why I was making cupcakes and why there was a surprise I responded, “Just because.” My kids love to dress up, but they rarely get the opportunity to dress up in public. Today was different. They were able to go to the movie theatre in their new Cinderella dresses from Party City. Going to the movies is a rare treat, but we decided to do it up big this time. 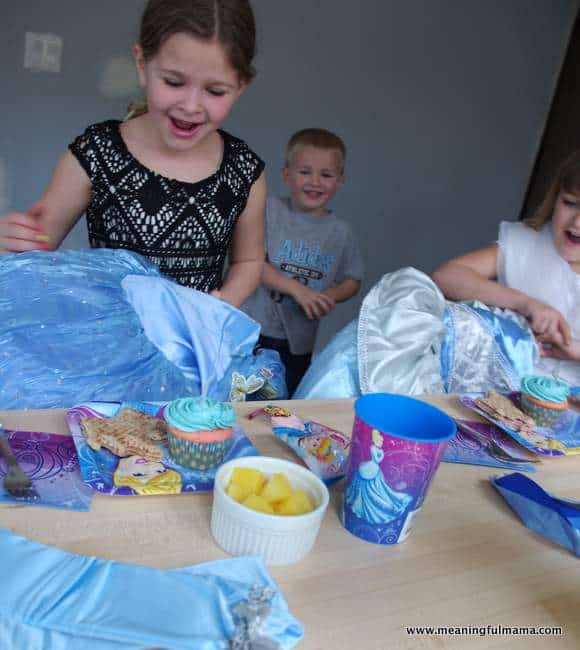 I surprise them with their own version of a Cinderella gown, so we got the Cinderella costume that matched the movie for Kenzie and a more traditional Cinderella gown for Abigail. I also gave them gloves to match. You can see on their faces that they were so excited when they came down to the surprise.They have Cinderella gear to match every budget at Party City. The costumes were way higher quality than any I’ve had before, and we are a family full of costumes. 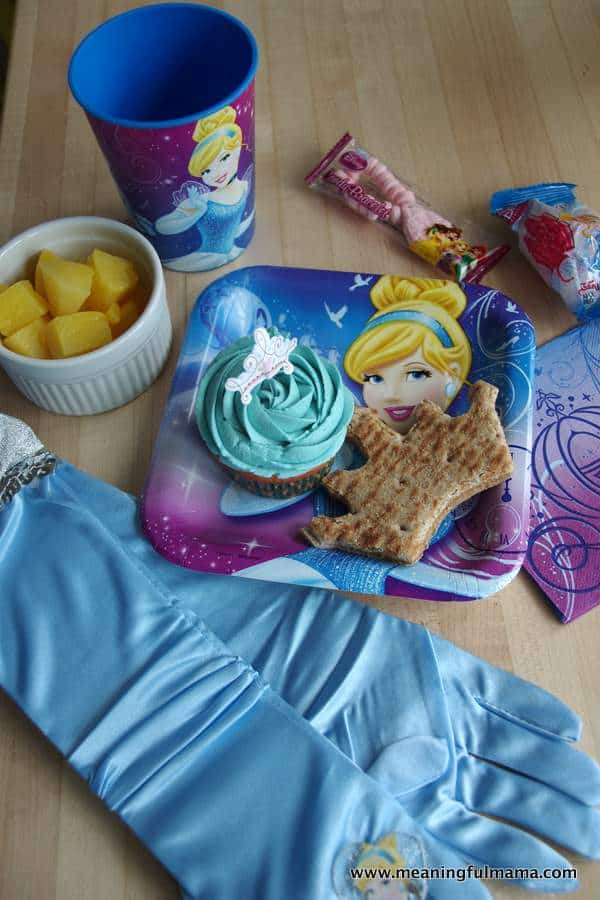 I also went to the Cinderella party section at Party City to pick out some items to have a little Cinderella surprise party just for our family before we went to the theatre. I picked out plates, napkins, plastic cups, cupcake liners and toppers, and candy bracelets and rings that they could wear to the theatre. *All items were given to me from Party City at no cost. 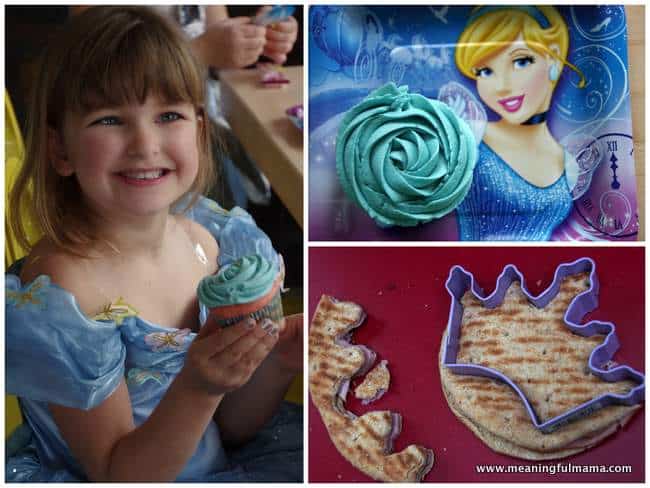 We made a special princess lunch with crown sandwiches I made from my crown cookie cutter (affiliate link) and beautiful cupcakes. 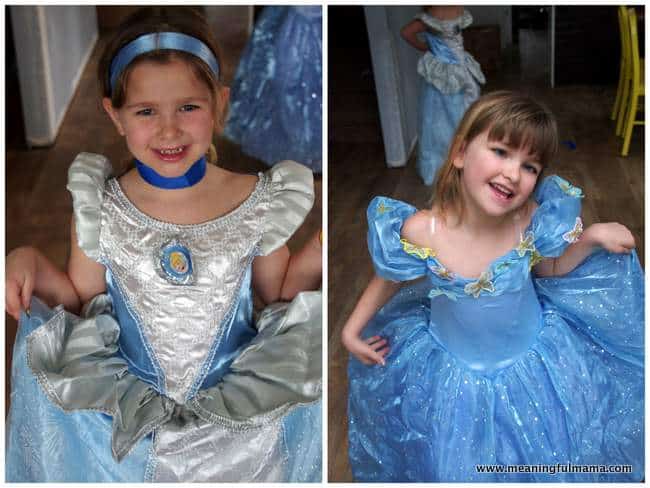 After our special meal together, we headed out to see the movie, all fancy in their new gowns. Of course, adults smiled as they watched the princesses walk by. To our surprise, we were greeted at the theatre by Cinderella, Elsa and Anna. So what did we think of the movie? LOVED IT! The 2015 version of Cinderella was wonderful. It did have hard topics as Cinderella had to deal with the death of both her mother and father. My girls were able to express that they had tears in their eyes during that part. I, as a mom, didn’t love hearing the words “shut up” twice in the movie, but if that’s the only complaint, Disney nailed it. It stays true to the Disney animated version but feels more real – with real emotion. The acting was fabulous. The costumes were divine, as was the setting. The mom, on her death bed, tells her young Ella, “Have courage and stay kind.” This is a message Cinderella takes with her throughout her life, while she demonstrates kindness and forgiveness – traits I want to see in my own daughters. We all give it two thumbs up. 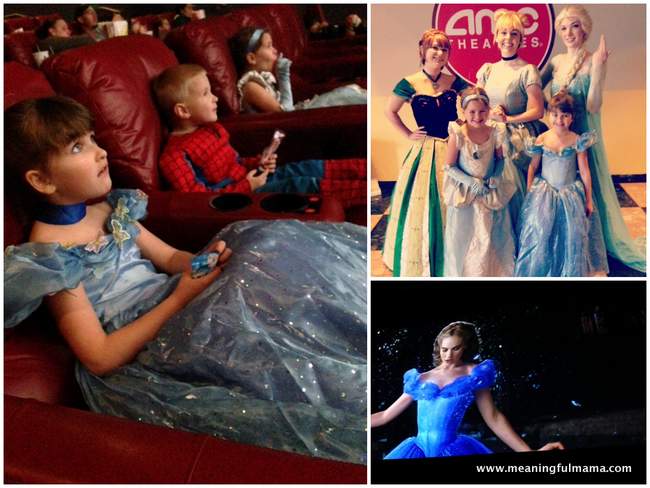 How can you celebrate the life of your child “just because.” It could be a Cinderella surprise for your kids too, or it can be something a little less involved. Maybe you could get a gift a a few balloons with a card saying, “We celebrate you.” Maybe you could have your own mini party with special plates or decor. Party City has all your party needs for how you decide to celebrate your kids “just because.”

My passion is to encourage and equip parents to be more intentional in this important role.
Your information will *never* be shared or sold to a 3rd party.
wpDiscuz
0
0
Would love your thoughts, please comment.x
()
x
| Reply