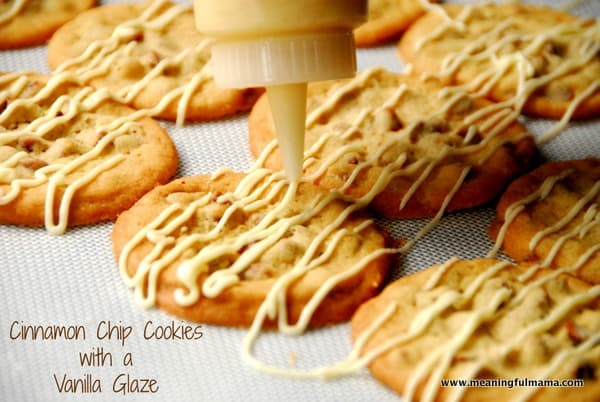 Cinnamon chip cookie with a vanilla glaze is a recipe I developed this week. Cinnamon chips are a new product to me. Hershey makes them, and I have never really noticed them before. I am surprised. I have heard Seinfeld do a stand up where he talks about the grocery store being like a casino. They put in bright lights, pump in air, and you can’t see outside to know the time of day. One can spend hours in there, wandering up and down the aisles and looking at all of the new products. I would say I am one of those. It is a bit harder as 98% of the time I have 2-3 kids trailing along. Despite the challenges of shopping with kids, I managed to find this product. I’m sure it’s not new, but it was new to me. I have been holding on to the bag for a while thinking I would make some scones. However, as I was trying to come up with a cookie to make for my monthly cookie contribution at church, I ran across the cinnamon chips and thought it would be really fun to try and make a cookies with scone-like flavors. It was a success. Recently I did a post about a recipe I inherited called the “Best Ever Cookies.” I said they were good and would be part of my rotation, but I openly admitted I had others I considered the “best ever.” You can go back to that post to discover my favorite all time cookies. We have a new contender. I absolutely loved this new cinnamon chip cookie. I took them to church and was around while a few of my friends tried them out. I got the thumbs up all around. My brother-in-law, not knowing I had made them, commented later that he had taken two of them and that they were so good. These will be made often in my home. I did use my chocolate chip cookie dough base (because why mess on a good thing?) and moved on from there.

5-1o ounces cinnamon chip  (Why the large range? Varying tastes. I loved the full amount of cinnamon chips I added. Most people I asked agreed with me. However, my husband and one other friend said they’d prefer less. I guess it’s a matter of your cinnamon appreciation level.)

Slightly melt butter and shortening in microwave (I did mine about 18 seconds).  Add sugar, water, eggs and vanilla.  Mix until creamy.  In a separate bowl, combine dry ingredients.  Add dry ingredients and mix it all together.  Batter will be slightly creamy.  Add cinnamon chips and stir in by hand.  Bake 10-12 minutes at 350.  We cook them about 10 minutes.  They don’t look 100% cooked at that point, but continue cooking and settle in when they get out of the oven. Cool completely before adding glaze.

Combine all ingredients and beat on high for 1 minute.

*Note about the glaze: It does not stiffen up much. The flavor is amazing, but if you want a glaze that will harden onto the cookies, you would want to pursue another options. Drizzle the glaze over the cookies. I used a squeeze bottle, but you can also use a pastry bag or even a Ziplock bag with a small hole cut in the corner. 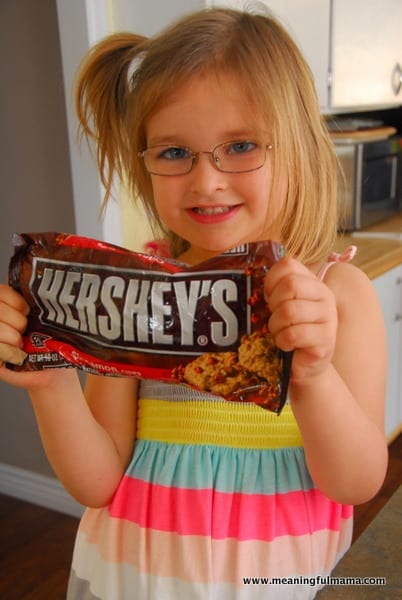 Here’s the product you need. You’d think this was a sponsored post, but it’s not. I really should have contacted Hershey’s about this one. 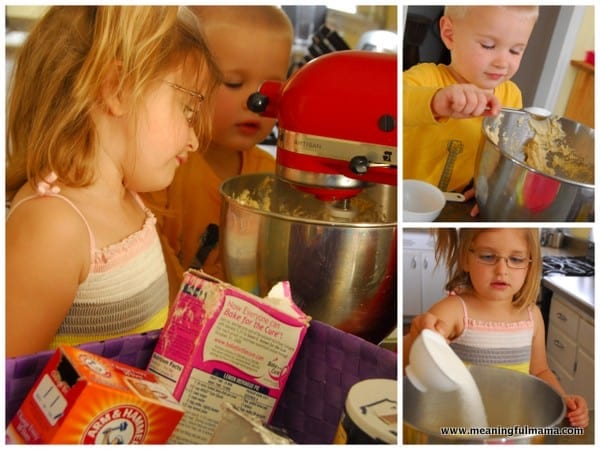 I couldn’t have done it without my little helpers. OK – Maybe I could have, but it would have been a lot more difficult. No, it actually would have been a lot easier. However, I wouldn’t sacrifice the bonding time with my kiddos for the ease. I am passionate about having kids in the kitchen.

I want one; I love cinnamon chips! 🙂

If you are like me, it’s hard to try other people’s recipes when you’re creating your own. However, I think you would love these cookies!