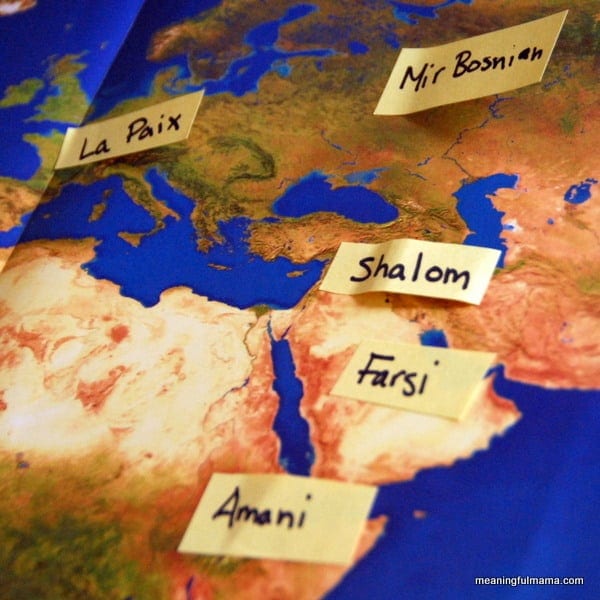 I wanted to spend a little bit of time focusing on the meaning of our verse this week.  Although I know that peace on earth isn’t achievable until Christ returns, this verse says to make every effort to live in peace with all men.  To be able to talk about what this looks like globally, I thought it would be fun to
look up how to say peace in different languages and mark it on a map.  I found 144 translations on one site. We had a huge map, and I just cut up some sticky notes where I could write the word peace translated. Then, I struck the translation in the country it represented. It was a great way to be able to expose my kids to the concept of different people groups, languages and locations while talking about how God wants us to try and live at peace with ALL men.  I intentionally included some of the countries that we are either at war with have that potential.  I have no idea if I was pronouncing these translations properly, but it was fun to let the kids try to learn the words too.  I found it particularly entertaining that Kenzie had a Where’s Waldo hat on from a previous Halloween costume. 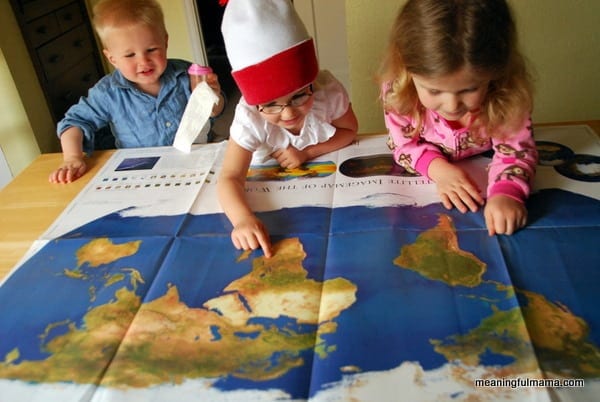 I love how you talk to your children about more complex topics. Some people don’t even bother because they don’t think the children understand. I know they do because we have introduced many different complex subjects to my young children. They demonstrate their understanding through thoughtful comments. Also love the map! Thanks for sharing.

LOVE, LOVE, LOVE! We are in the process of going overseas in the next few years. I am so passionate about our boys growing up with a missional worldview. I’m SO glad that there are moms like you out there. Thank you!

Thank you also for sharing this on Saturday Show & Tell and encouraging my readers to think globally too! 🙂
Mackenzie

Thank you, MacKenzie. It’s so important, and I’m glad you are mission minded. I guess we’re all called to different mission fields at different times. I’ve done some overseas stuff too, but see raising my kids and even this blog as a couple of my mission fields for now. Blessings on you!

Great ideas, thanks for sharing with us!

Thank you so much!