There is a recipe attached proceeding this article, but since this blog is all about being a meaningful mom, the real content of this post is how to involve your children in the kitchen.  There are so many teachable moments when working with food.  There is something just so homey about it too.  A friend of mine wrote her entire thesis paper about food and family.  It bonds.  I watch cooking shows, and the other day one of the contestants on “Chopped” (I believe) said, “While the other kids were out playing baseball, I was making meatballs with my grandma.  While I want my kids to be out playing too, there is something about being in the kitchen that knits people together.  So, here’s some ways you can have your children with you in the kitchen: 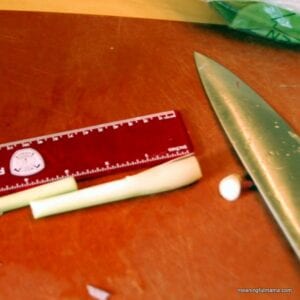 1. Estimating – Our lemongrass had to be cut to 4 inches, so I showed them what four inches was, and we then estimated where to cut the other ones. 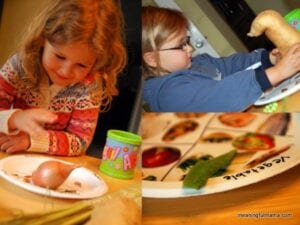 2. Learning Food Groups – We had done these food plates to learn the different food groups.  Today we utilized them by taking some of our ingredients and putting them in the section they thought they belonged.  They were learning the the names of food as well as their classification. 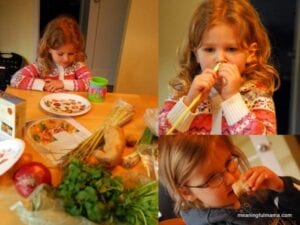 3. Sense of Smell – I love the smell of ingredients.  I let the girls smell the fragrant aromas of the lemongrass, garlic, ginger, shallots, onions and cilantro as we were working with the ingredients. 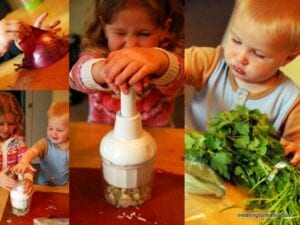 4. Hands on Helping – The kids were also able to help.  I got out my pampered chef chopper so that they could (under close supervision) chop the lemongrass and garlic.  They helped grab me the ingredients and take the peals off the onions, garlic and shallots. 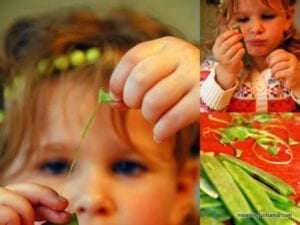 5. Snap Pea Tutorial – I had a cooking show moment teaching them that snap peas can be cut half way through at one end and then the string can be pulled back.  For a good tutorial you can go to Real Simple here.  Rather than giving them the a knife, I showed them how they can pinch off the end and pull the string.  We had a competition to see who could get the longest one. 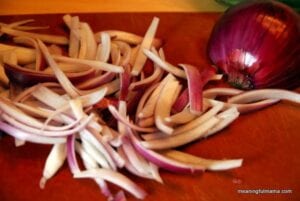 6. Cooking Show – I have no aspirations of being the Next Food Network star.  That said, it’s kind of fun to have my own little cooking show in my own kitchen.  I’m demonstrating whatever knife skills I have and talking about the importance of making cuts uniform so that the flavor stays the same throughout. I try to keep the explanations brief and farther between, but I still see moments to teach everywhere.

What a great way to get the kids involved! Thank you so much for sharing!