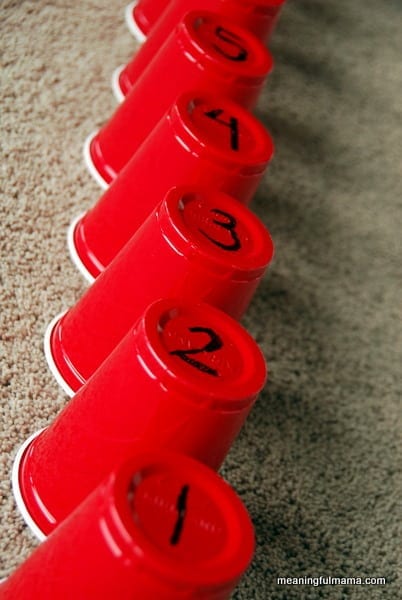 You would think that a the concept of further and closer would be somewhat innate. It isn’t. Kids need to learn this concept just like they learn other things. In this game, kids will learn about the concept of farther and closer as well as learn terms like first fourth, sixth, etc (these are called ordinal numbers). There is some strategy involved also, so kids can learn problem solving. The basic game involves you hiding the coin under a cup and then sitting by the front of the line of cups. The child then guesses the cup. Let’s say you hide it under the fifth cup. So, if the kids say “I think it’s under the 3rd cup.” They then check. You can say, “Nope, it’s farther away.” They may guess the 7th cup. You say, “No, it’s closer.” They need to find the coin by four guesses to win. You can also have them hide it for you. I had Kenzie and Abby hiding and guessing with each other. They wanted to play this game over and over. 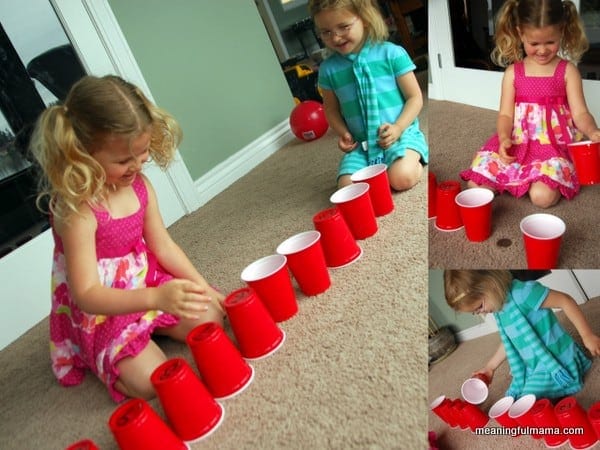 this looks fun! we’re doing something with coins in VBS tomorrow. maybe this would be something to try also! thanks for linking up to tip-toe thru tuesday!

Did you end up using it? If so, I hope it was fun for the kids.

Funny how the simplest of games can be so fun. I’m going try this with my little ones today! Stopping by from the blog hop 🙂

How’d it go? I hope they had a good time.