Home » Kids » Crafts » Make Your Kids into Interchangeable Blocks
I recently came up with an idea that made me really excited to create. You can make your kids into interchangeable blocks by following this fun tutorial. This would be a great gift for grandparents. Another idea is to have far away relatives send you their pictures, and you can make blocks for your kids of their cousins, aunts, uncles and grandparents to build familiarity. These blocks create hours of play entertainment for you kids. They will love switching around heads and bodies to make everyone look silly. 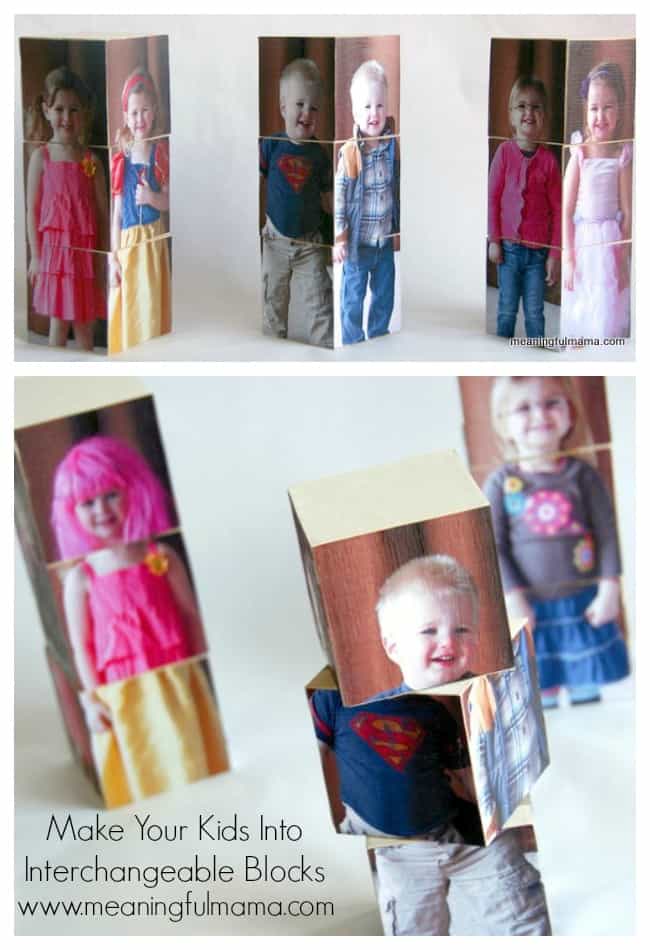 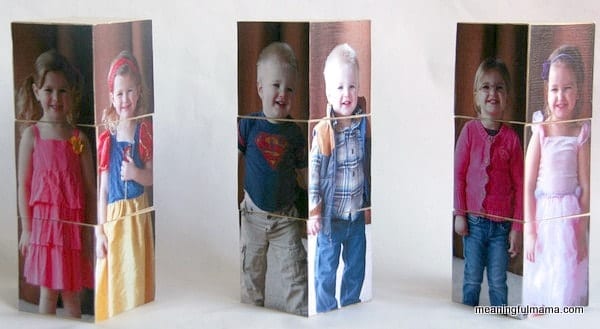 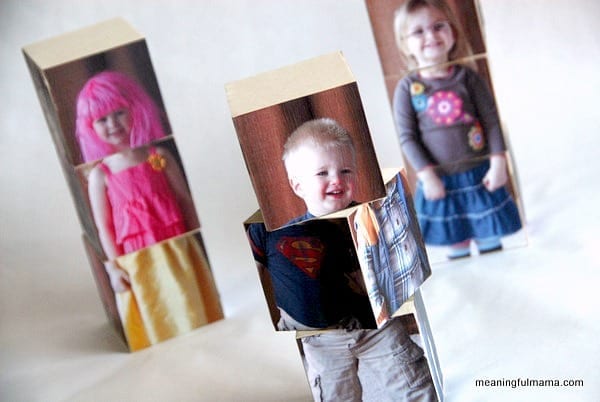 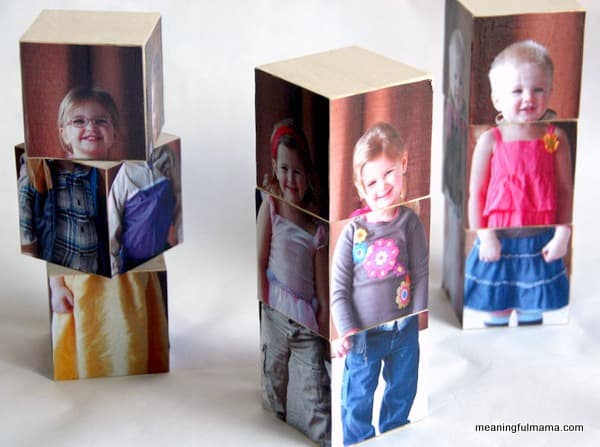 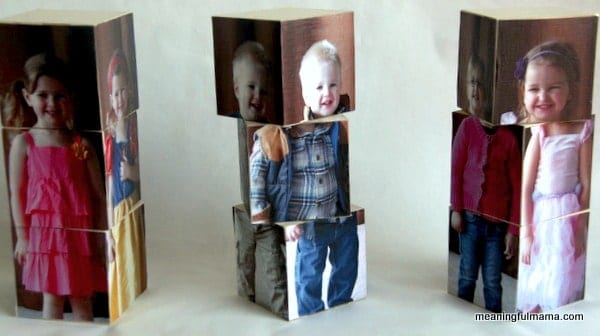 I normally have one main picture to represent a project, but I couldn’t decide which one represented the project best. I had fun mixing the blocks all around, and I couldn’t decide. So, I just put them all up for your enjoyment. This project has been in the works for a while. I’ve been excited about it. It’s, as far as I know, a Meaningful Mama original. I had the idea to do it when I saw some Land of Nod stacking animal blocks in the girls’ room as I was putting them to bed. Here’s how we created these blocks… 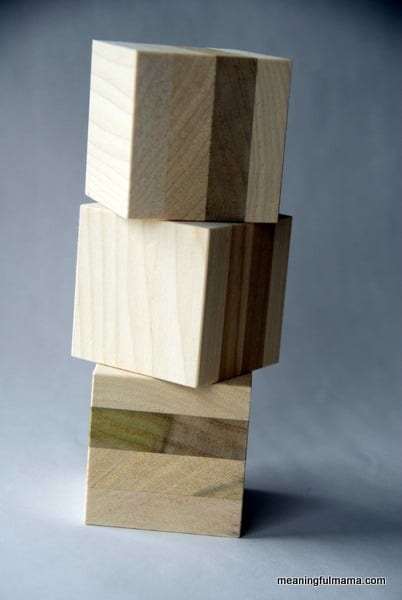 Here are the blocks. I went to Lowe’s and picked out a piece of lumber at the hardware store. It was 2 1/2″ x 2 1/2″ x 30″ (I believe that was the length). I also found some online at a Wholesale Wooden Block site. The piece of lumber I bought I had my husband use the chop saw to cut to a perfect square. I could have done it, but my husband is way better at precision. He then sanded them down for me…what a guy. 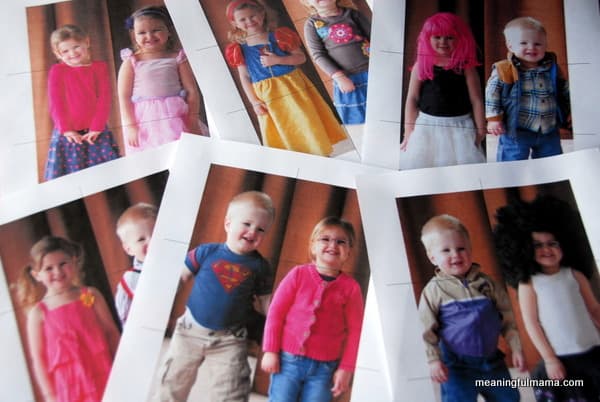 Next was the photo shoot. My kids change outfits all the time, so I thought this would be tons of fun for them. It ended up being, I admit, a tad more of a challenge than I anticipated. I guess they like to dress up when someone isn’t telling them to do it. I said they could pick out one outfit that made them feel pretty, one outfit of their own choosing and one silly outfit. I also said there would be a mommy’s choice. We put an X on the spot they would stand, and we set up the tripod for the camera. My amazing husband then sized these photos to fit the 2 1/2″ block.  Kids don’t come proportioned in perfect thirds, so he had to play with it a bit and their feet are cut off, but that’s OK. My man is super good on the computer, and he said it takes a bit of know how in Photoshop to make it happen. See how he had the cutting lines on there and everything. 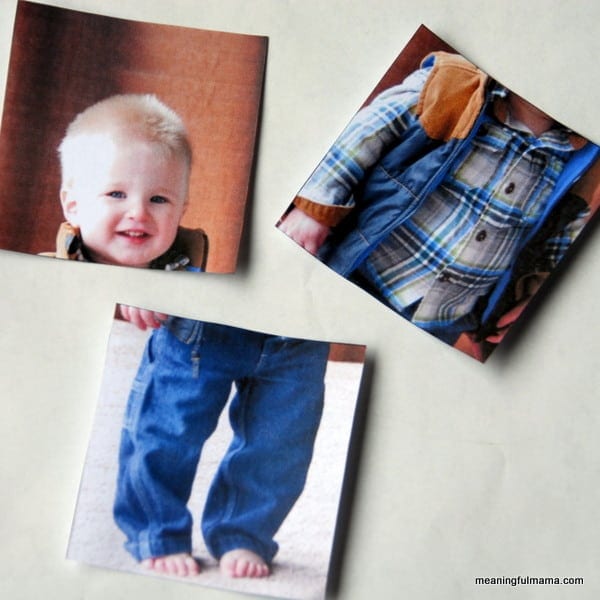 Once your pictures are printed on normal printer paper, cut them out and make sure they are sized for the blocks. I had to do slivers of trimming on the sides. 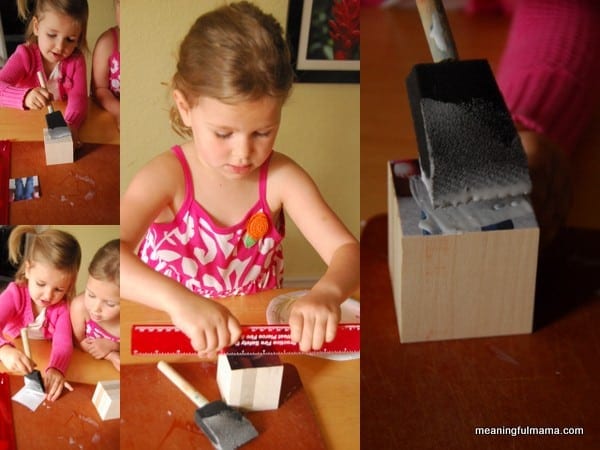 Finally, it’s time to Mod Podge. Please see my post on tips for using Mod Podge. We did two sides on all three blocks of each body and let those dry completely before doing the other two sides. I put a plain piece of paper on the top and bottoms of the blocks. The kids were so excited to play with these, and I love all the fun combinations you can make out of all the blocks.

I need to give a shout out to my husband who was a major contributor in this project. He’s amazing! 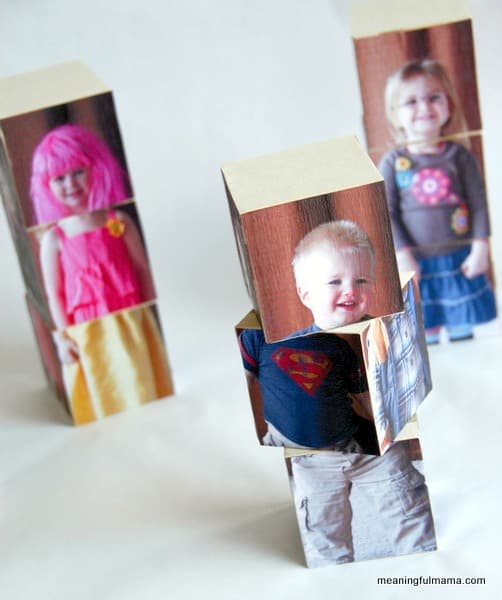 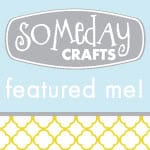 My kids would get such a kick out of these! Thanks for the inspiration. 🙂

The kids can’t stop playing with them. Thank you for commenting.

This is such a super fun project. It would make really cute grandparents gifts too. What a great idea.:)

A grandparent gift is a great idea. I bet they’d love it.

This might be a stupid question, but are your blocks connected at all or just free standing on top of each other? This looks like so much fun!!

They’re just free standing, so you can mix and match as you want. No stupid questions here.

Very cute idea. I love anything with pictures!

I’m a sucker for pictures too. Thanks!

VERY cool. Totally pinning this, thanks!

Thank you for pinning. I am glad you like it.

I love this and will be trying it! I have also pinned it and a new linky follower and liked you on FB. Have a wonderful week. Stop by anytime!
http://fireplacedecorating.blogspot.com/

Thanks so much for all the love. I stopped by your site too. Really loved seeing all the fireplace re-dos. I love the design shows where they do the before and after shots. Great stuff.

Those picture blocks are so cute! That is an awesome idea! New )follower. 🙂

Thank you so much for following along. I’m glad you like this project, and I hope you’ll gain more from the site as you poke around. I just joined your site too. Love the footprints on the mat idea. Fabulous.

What a fun idea. My kids would love this. They would to both help make it and to play with them. I am featuring this at somedaycrafts.blogspot.com.

Thanks so much for the feature. I have added your button on the blog post. I appreciate the exposure!

What a super darling idea. I love it. Shared this on my COM-FB page. Have a fantastic day. winks, jen

Thanks so much for sharing it with your readers. I really appreciate it.

Soooo adorable! I’ve been wanting to make these for awhile but setting up the photo shoot and sizing the photos properly seems pretty daunting. Yours turned out prefectly though! Thanks so much for sharing at Etcetorize this week~

Thanks for hosting. It was a tad daunting. I’m so glad I had my husband along for the ride to do a bunch of the work. The kids are loving them though, so I say they’re worth it.

What an fun idea!! I love how the kids got to help make them. 🙂 Megan

Thank you. We had a lot of fun making them and now arranging them now that they’re finished.

this is SOOOOOO FUUUNNNN! i’ve never seen anything like this before! what a hoot! i bet they love them! thanks so much for linking up to tip-toe thru tuesday!

They do love them. I hadn’t seen anything like it before either. I’m wondering if I actually came up with an original idea. That would be crazy. Thanks again for hosting.

HAHA! I love this!!! It would go great on my desk.

I would love for you to link this to my Flaunt It Friday link party! Also, follow my new blog Blissful Bucket List! 🙂

Sorry – this week has been loco. Sorry I didn’t have time to link up this week. Following now.

awesome project! i hope we could do this too…

I would love to see the results if you do.

I linked over to this project from my blog today. 🙂

Thank you so much for linking back to me. I really appreciate it!

0
Reply
Sierra @ H is for Homeschooling

Oh, this is adorable! I pinned it 🙂

We did a similar project using megabloks and our faces.

0
Reply
Mama Jodi
Reply to  Sierra @ H is for Homeschooling

Funny! I had seen nothing like this. I actually clicked on all of your links completely curious if they go the idea from me, but they were prior to me. I love the face idea you did.

Great idea! I’ve done these before with clip art people, but my kids would LOVE to see themselves on there instead! Adding this to my holiday gift idea list!

these are amazing. I want to make these for my grandson. He lives in Texas and we live in Indiana, as well as his other grandparents. I’m thinking of making blocks of the family members that live here so he can remember us as he enjoys playing with his blocks.

I love that. My kids still love and play with their own. They have really stood up well. Getting a good picture to make it work will be the trickiest part, but I think you’ll make it work. What a creative way to stay connected. Looking at your blog, I love the passion you have for kids and family. Blessings on your journey!

This is so adorable! I want to make this for my nephew for christmas, he is almost 4. Your daughter looks a little older, did she enjoy the blocks? Just wondering if older kids would think this is too easy (as a puzzle)? But definitely making this for my younger daughter, thanks for sharing!

My kids still enjoy it. I think it’s just fun to switch the heads and bodies around to make it fun. I don’t think it is much of a challenge, but the kids have fun messing with it. I hope you and your kids love it too!