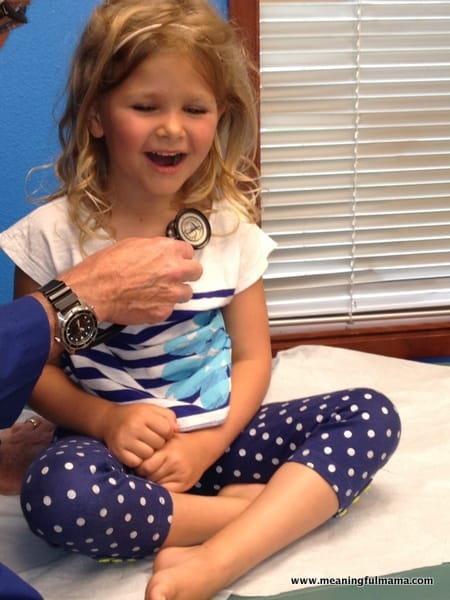 Today was doctor day. We had to do a 5 year and 3 year old check up. I have done a different shot schedule for the kids, so this meant shots for both girls. Also, Abby had a wart. As someone on my Facebook page put it, “You hit the mommy jackpot.” Recipe for disaster? Right? I thought so, but I did as much as I could to make it go well, so I thought I’d pass along some tips for you. Now, I anticipated a bit of drama. We are not void of it around here. I wasn’t void of it either when I was little…right, when I was little. Ha! I know that my parents had to deal with my sister punching a nurse and me running away once to avoid the doctor and constantly locking myself in the car when we went there. I couldn’t anticipate my experience being much different, but I wanted to be intentional. I am happy to say it went pretty well, considering. Here are some ideas to make your life easier.

1. Try and plan a happy time of the day. My kids are easier in the morning. It seems afternoon time can be a bit more of a struggle, especially with the girls dropping a nap. So, I planned an earlier doctor appointment.
2. Find a sitter for the children not involved. we are lucky to have a grandma nearby who watched Corban. If cost is an issue, try and find a friend so you can do a babysitting swap. Be willing to ask for help from people in your lives. 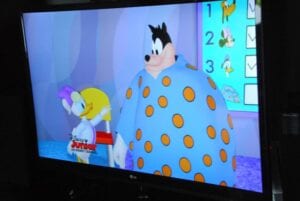 3. Talk to kids and prepare them ahead of time. We talked about how it would hurt a bit when they received their shots and wart treatment. I didn’t want to lie at all or surprise them at the last minute. I talked to them about breathing that could help them. I also told them to count to ten after the shot. We practiced. We played doctor leading up to the appointment. We also found a show, Mickey Mouse Clubhouse, this morning that was all about the doctor. You can go to the library and get books too. 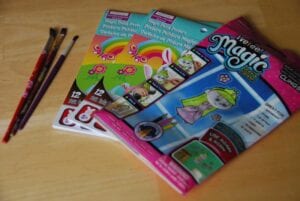 4. Pack a Bag. We love our doctor. He takes time to really engage and talk to you about questions you have. The only problem with that is he is always running behind. Our appointment was 2 hours from arrival to leaving. Knowing this, I tray and pack an activity bag and have things prepared for the time we are waiting. I brought a couple easy coloring project and an all encompassing paint papers where you just need water. You can bring a couple books. I also brought snacks. 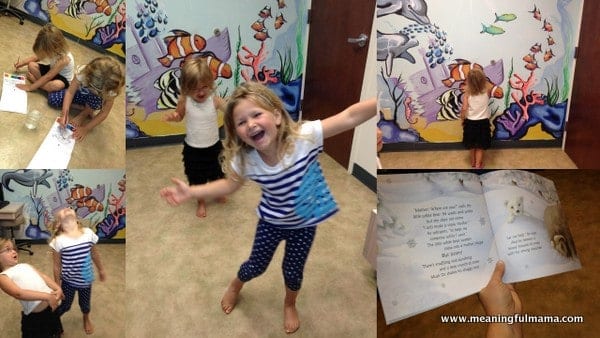 5. What do you do During the Wait? One of my meaningful mama tips has involved waiting. I hope you’ll look back at that. the things we did today? I Spy. Reading. The activities we brought. Simon Says. Stretching and yoga positions. Trying new physical tasks – bouncing on a foot – balancing acts. Introducing new colors – I showed them turquoise and teal, and we tried to find those throughout the room. Counting – We tried to count how long it would be until the nurse came back. It’s a great time to teach counting by 1’s, 5’s or 10’s. The time seemed to go by quickly because I was engaged and intentional.
6. Positive Re-enforcement In anticipation, I told them I wanted them to try and be brave and strong. I told them they could cry, but I asked them to try and not have a lot of drama attached. Every time they were behaving, listening or acting brave I went crazy with compliments.
7. Count to 10. After their shots or the burning of the warts, I slowly counted to 10. I had told the girls early on that if they count to 10, they’ll find that the initial pain is almost all gone after 10 seconds. I was holding their hands, and we counted to 10. They really saw that it was true and were able to relax even before that. 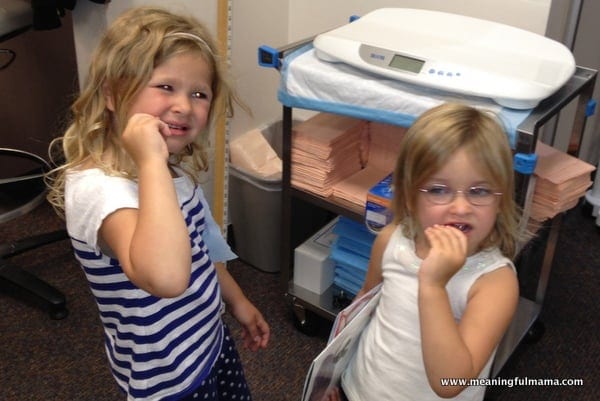 8. Give them Something to Suck On. They didn’t end up needing it, but I had brought candy canes (lollipops probably would had been ideal). I don’t bribe with candy, usually, and I didn’t even tell them I had it. However, I was prepared to stick something to suck on to ease crying if I needed it. Hard to suck and cry at the same time. In this situation, I don’t really see it as a bribe, but a sucking is actually a proven soothing thing. 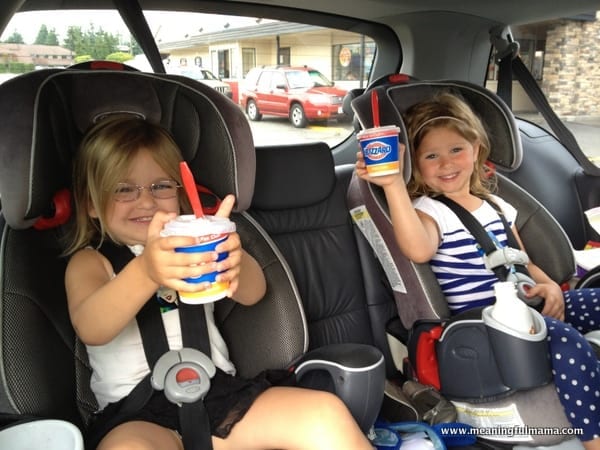 9. Have a Fun Tradition. We barely do fast food. We try and keep things healthy. However, we do believe in treats. I know, I’m a horrible mom – candy canes and ice cream in one doctor visit. However, I remember when I was little we had the tradition of going to a certain hamburger joint after the dentist for burgers, fries and shakes. It was also something fun to anticipate and look forward to in something that can be shadowed with unpleasantry. So DQ drive-thru for Blizzards (Lizards according to Kenzie) it was.
10. The Results? Much better than anticipated, really. The wait went by fairly quickly. The kids had a positive attitude most of the time. They were excited about all of the fun elements of the doctor’s office. Kenzie tends to be a tad braver than Abby and has a bit more tolerance for pain, so my strategy was to have her go first because I anticipated less tears. I was right in the less tears arena. As I was holding her hands and looking in her eyes, I saw the tears well up, but she was determined. I pulled her into my arms and she whimpered just a bit. Wow. Good girl. Abby’s wart removal went better than I thought. There were some tears, but the doctor had warned it was extremely painful, so I thought she did good considering it all. The shot was a tad different. Seeing Kenzie go through it, the anticipation of the needle got to Abby. She said no and wouldn’t climb up on the table. So, I had to lift her up and hold her down with her crying and kicking. However, she got the shots, we counted to ten, and she calmed down immediately. The anticipation was far worse than the pain. So, a tad of drama there, but I was very pleased overall. It could have been a lot worse. I complimented them like crazy. I hope these tips help you to prepare for your next doctor’s visit.

Luke clued me in to your new blog and I just wanted to let you know how much I enjoy your writing style and everything you are sharing. Thank you for being an encouragement.

Love all of these ideas! Thanks for sharing.

Great tips! I tried to take my 3 year old out to lunch after the dentist and he informed me that “we already went to a restaurant…in Atlanta.” Which was on our vacation months ago! Ha, guess he is more frugal than I am. 🙂

My mom used to take me to DQ after doctor’s appointments…I have started this tradition with my daughter as well! So much fun!

Great tips! We have a doctor/dentist bag…it includes books, coloring essentials, and flashcards–all things that tend to keep Catherine entertained.

Great tips! I have a toddler who was a regular at the doctor’s office due to frequent ear infections (much better after getting tubes put in) but he still has a negative association with the doctor’s office so am always looking for tips to make it better. Kathy Penney @ Pinner Takes All.com