Home » Kids » Character Building » Forgiveness Magic Trick
Forgiveness
“For if you forgive others their trespasses, your heavenly Father will also forgive you.”
– Matthew 6:14 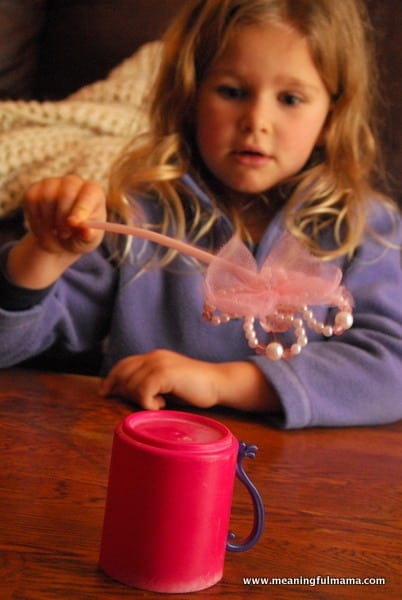 I grew up with a dad who liked to do magic tricks. Did I gain any of his skills? Nope – not so much. It doesn’t mean I can’t appreciate the art, but David Blane I am not. Luckily, I was able to test out my own magic skills on a 5, 3 and 2 year old. They thought the next David Copperfield was in the house. 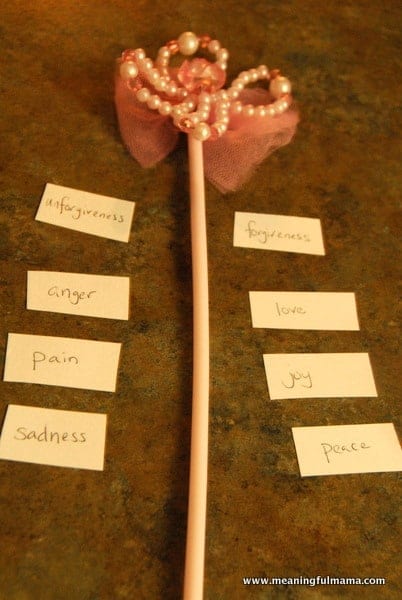 Before the trick started, I wrote out 8 words on 8 cut up index cards. I wrote: un-forgiveness (I know – not really a word, right?), anger, pain, sadness, forgiveness, love, joy and peace. I also had a magic wand. I got a cup that you could not see through. I then took the words anger, pain and sadness and put them up my left sleeve. Love, joy and peace I put on my right sleeve. The girls sat across from me at the table. I gave Abby the word un-forgiveness and Kenzie forgiveness. I had Abby put the word forgiveness under the cup while I slyly (or attempting to be) emptied the words anger, pain and sadness from my sleeve. I then had her wave the magic wand over the cup and say the magic words. As she did this, I moved the cup in a circle, letting it go slightly over the edge of the table. I quickly let the word un-forgiveness drop out and one of the next circles around replaced it with anger, sadness and pain. They then picked up the cup and saw the three words. I said that when we choose to not forgive, we end up with more pain, anger and sadness. I repeated the magic trick with forgiveness, which became replaced with love, joy and peace. Seemed to work on them. It was a lot of fun to watch their faces light up and their own attempts at duplicating the trick.

This is very sweet and a fun way to talk about forgiveness! Thank you for sharing! beinglds.blogspot.com