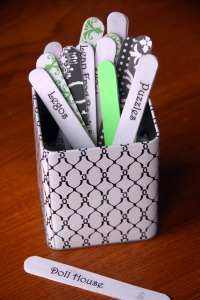 I was inspired by a friend of mine who created a Velcro poster board with activities her children could do independently throughout the day.  I thought it was a great idea and wanted to come up with my own solution, so this was the result.

Materials:
* Small basket or can of some sort (I got this black and white model for less that $4 at Michael’s)
* Patterned or solid colored paper of choice
* Tongue Depressors
* Mod Podge or Glue (I used Mod Podge but decided a glue stick probably would have worked just as well. 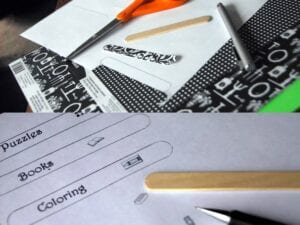 I did a lot of the initial work.  I created a Word document with all the activities they could do independently.  The list included: Puzzles, Books, Coloring, Magnet Dolls, Doll House, Kitchen, Blocks, Legos, Electronics (Camera, Toy computer), Leap Frog Books, Stringing Beads, Writing Practice, Play Doh, Explode the Code, and Mr. Potato Head.  I put a little picture by the side of each one.  I decided to make this a printable for you….or I tried.  My husband is asleep, and I’m not sure how to do that (He’s the computer brain behind the operation).  I will try and get his help tomorrow.  If you want, you can contact me and I can email it to you if you are interested.  Once I printed that out, I traced around the tongue depressor onto the words paper.  I also used the tongue depressor to trace around my colorful paper. 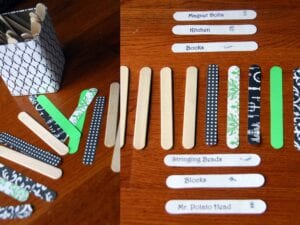 Cut away.  When you’re done cutting you will have a word and a design paper cut out for each tongue depressor. 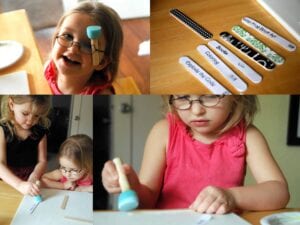 Now it’s time for the kids to get involved.  They get glue the words on one side and the designed paper on the other side. Like I said earlier, I used Mod Podge.  I started out putting the Mod Podge on the stick, putting down the paper and then doing the Mod Podge over top.  However, I found it was bubbling pretty badly.  So, we ended up just putting a light coat of Mod Podge underneath.  I think a glue stick would have worked fine and been easier.  Might hold up the way we did it better.  We’ll see.  I am so glad I have this system now in place so they aren’t like fish out of water when I say they need to go play while I have a little time to clean up the kitchen.

Wow, this is incredible! And your photos are so crisp and clear! Very fun project and I love the idea of them being encouraged to work independently! Kudos to you!

Thank you so much. We utilized the sticks today, and it kept them occupied for quite some time.

Love this idea! I’m a new reader, through “I Should be Mopping the Floor.” My kids always need some serious encouragement when it comes to independent play. Maybe the thrill of picking a stick would help!

I think there is a novelty to it. I tried it the first day, and they were so excited. When I told them I had a craft planned and asked if they wanted to do that or finish their independent play, they both wanted to finish playing by themselves for a bit. Seriously never happens.

thanks for linking up to Make it Monday! I’ve shared your link on the Brassy Apple FB page and with my twitter followers PLUS gave it a PIN too!

Oh wow! What a huge compliment. Thank you so much.

Thanks. We didn’t have a space that made sense for the poster like your garage does.

Thanks. We are needed a system.

What is Explode the Code? The link wouldn’t work for me. And this idea is awesome! I will be doing this for my four year old son!

Hmmm…I wonder why it didn’t work. Here’s the link https://meaningfulmama.com/2012/02/day-53-explode-code.html also filed under the activities tab. It is a great resource for helping kids to learn to read. Thanks for asking!

What a fabulous idea!

Thanks! So far it seems to be working for us, and the kids enjoy having that direction.

What a cute idea! Thanks for sharing 🙂

Fabulous idea! I love it! Thanks so much for linking up!
Ashley

What a great way to encourage them to be independent! I’m going to share this on my PreschoolPowolPackets Facebook page–let me know if that’s a problem!

Not a problem at all. I take it as a huge compliment and thank you for spreading the love.

I follow Preschool Powol Packets on Facebook and found you. Love this idea! Our play group just did a busy bag swap and I was trying to think of a way to rotate the activities. I think I will try this!

I’m so glad you found me. Thanks so much for checking in. I hope it’s helpful.

I can’t see any of the pictures 🙁 Maybe it’s my browser.

I fixed this particular blog post. I’ll have to figure out what to about some of the other images that disappeared throughout the site. I’m hoping there’s one simple solution rather than doing them all manually.

Noticing this all over my blog. It has to do with my online Picasa account. Trying to rectify. Thanks for letting me know.