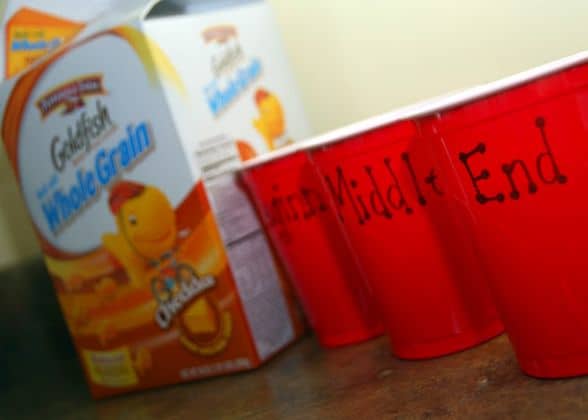 Trying to get your kids to recognize sounds and where they go in a word is very important as they are learning to read. 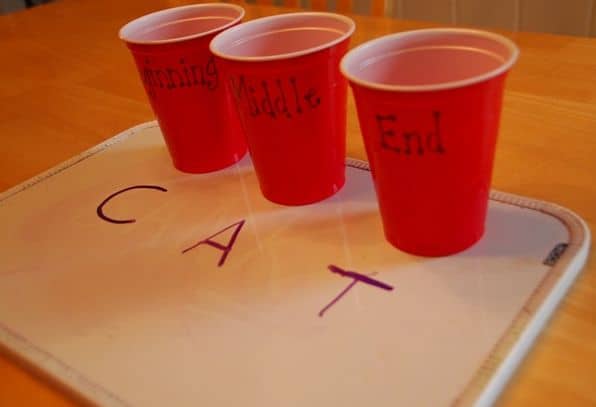 What I do is take three cups labeled beginning, middle and end.  This is a misleading first picture because I actually place the three cups on a blank white board and just have them listen.  I say, “Where is the ‘t’ in cat?”  They take a goldfish cracker and drop it into the beginning, middle or end cup depending on where they hear the sound. Then I write the word out – sounding things out as I go.  They get to eat the goldfish if they get it right.  You can adapt the difficulty of the word based on your child’s level.  “Cat” was for Kenzie, and she needed a lot of assistance.  I basically pointed at each cup as I made the sound having her listen for where the sound would go.  Abby, I started simple and moved on to blends.  I would say to Abby, “Where’s the sh sound in hush?”  You can do “Where’s the l sound in silly?, Where’s the s sound in seasons? (yielding two fishes dropped into two different cups) Where’s the n sound in kitchen?” 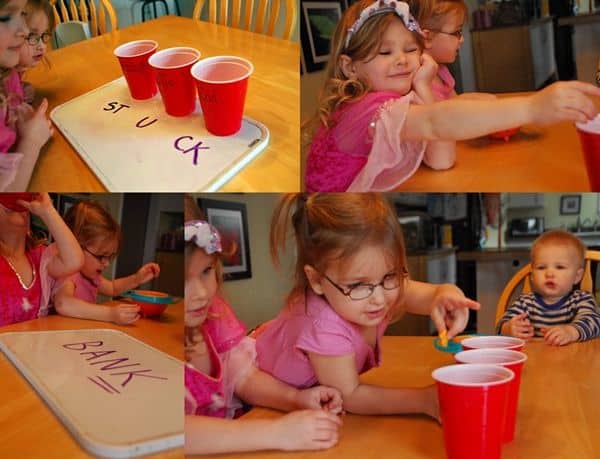 Thanks for stopping by Jodi! Your kids are very cute and the same age gap (just about!) Mine are 6, 4 (almost 5), and 3.5! Good times! Looks like we have a LOT in common! I like your style…keep up the great work in Motherhood! -Jocelyn beinglds.blogspot.com

Thanks for the encouragement, Jocelyn. It’s fun to follow along with people who are on a similar path.

This is a great way to beginning middle and end!

Thanks, I think it’s sinking in.

What a great game/lesson! Thank you for sharing at Sharing Saturday! I hope you will join us again this week!

Thanks for hosting again, Carrie.

It’s really great of you to share it with your readers. I appreciate the support, and I hope they find it helpful. 🙂 Thanks.