Sensitivity
“…so in Christ we who are many form one body, and each member belongs to all the others.” – Romans 12:5
Our next “I Will” statement was “I will watch facial expressions.”  I think it is really important for kids to learn to read other people and respond accordingly.  Part of that is non-verbal communication such as facial expressions.  I found a site called “Parenting Science,” that had some great ideas for learning facial cues.  The first thing I did was pick out some faces that expressed different emotions.  I found these on the web. I looked for faces that were happy, sad, neutral, angry, surprised, scared, silly, tired and disgusted. 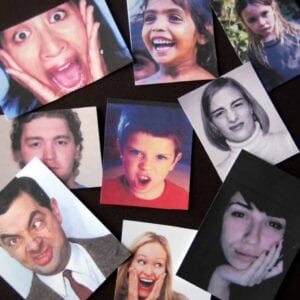 I printed these out and cut them into cards. 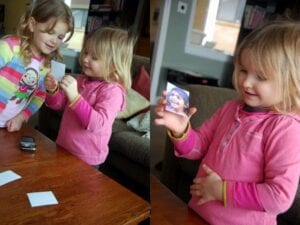 2. Guess Your Expression – The next game was where they would pull the card and then try to replicate the expression or feeling.  We would try and guess each facial expression and the meaning behind.
3.  Match the Expression to the Proposed Situation – This game involved me making up stories for the facial expression.  I said, “Which person do you think just found some moldy cheese?  Which person was building a tower of blocks and it got knocked over?  Which person just received a present they weren’t expecting?”  I continued this way to cover every expression.  I then had the girls make up their own scenarios – trying to figure out the reason for the emotion.  I was then the guesser.
4.  How should you respond? The final question I proposed to my girls was, “How should we respond when someone is feeling sad? Angry? Happy?”  I talked about how we can feel sad with them or change our behavior if we are the catalyst for the feeling.  I also told them how I felt angry last night when they wouldn’t go to bed like I asked but happy when I saw them helping each other today.  I encouraged them to respond to both the non-verbal and verbal cues I was giving.