Kids are disgusting. It’s that simple. You can call them creative, exploring the world or needing sensory stimulus. Call it whatever you want. The fact is, children are gross. Simply gross. I have been in bewildered awe as I have watched my children the last seven years. There have been so many, “Ugh!” “No!” “Stop!” “That’s disgusting!” “Don’t touch that!” “Wash your hands!” moments. I finally decided to put it in writing. I think I wanted to write it all down so that we could all just commiserate. I want you to know, it’s not just your kids. I have talked to enough moms and seen enough kids that I can tell you that kids are disgusting. Period. 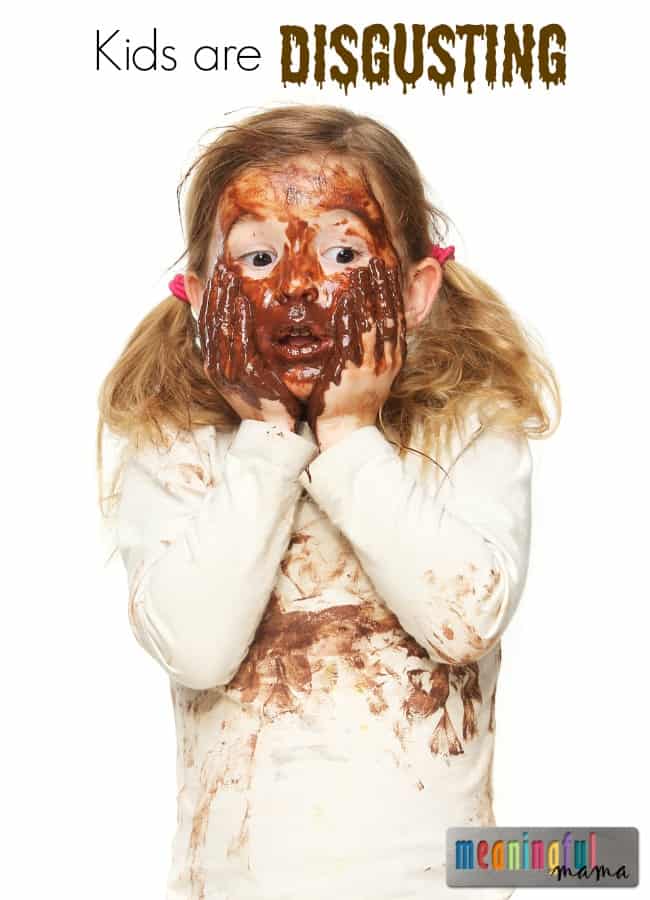 So, other than stating the obvious, I’ve decided to make a list. If you get grossed out by gross stuff, don’t read the list. You may even want to turn in your mom license because you’ll probably come across this stuff.  To get the list, I have used many of my own experiences, anonymous here to protect my kids. Also, I have talked to friends who are raising their own dirty little munchkins. Working with kids as a teacher, youth worker and toddler room volunteer, some of these are just observations of other kids as well.

There’s my list. Are you grossed out yet? Anything I missed? What could you add? 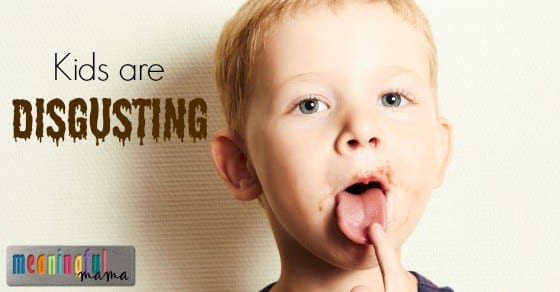 I have 4 kids 3 boys and a girl one of my boys when he was 3 said he was desperate for a wee so I took him to a discreet hedge also hidden by our car I was waiting to pick other 2 up from school, anyway he said he needed a wee stood to do it and pooed everywhere it was not nice. I also had no spares or enough wipes on me so he had to sit on a carrier bag home. He is now 10 and not too bad apart from his farts, my 13 year old boy still picks his nose and wipes it down his school jumper and trousers when told to stop he just frowns , I can see him still doing this as an adult in his work clothes. So yes I totally agree kids are gross even as teens.

Such a disgusting post, yet so true. My two boys did most of these things growing up.
Some things they still do as adults-yuck! My brother use to put caterpillars up his nose and try to sneeze them out. My mom had to use a pair of tweezers and take them out piece by piece.
My youngest son use to take my (new unused) tampons and plant them in the back yard letting the strings hang out so he can “pull them out like carrots” after they grew into something. Not all that disgusting, but, very weird. Oh, they came up alright, after the first big rain, you can see these soggy messy white stringy things covering the yard. Kind of looked like a cotton field.

Funny, I have been listening to comedy radio on Pandora, and decided out of the blue to google “Kids are disgusting.” I was not disappointed, and this article is so spot on!

Two disgusting/creepy things my kid did when she was younger:
Play in the toilet
Carry around the potty chair after she’d peed in it, to show off what she had just done.

That’s hilarious. I’m always amazed at what kids will do. I started this site too: http://www.areyoukiddingmekids.com. I thought I’d get more submissions and be able to carry it further, but I didn’t get as many as I had hoped, so I haven’t most for a bit. Kids are crazy. 😉