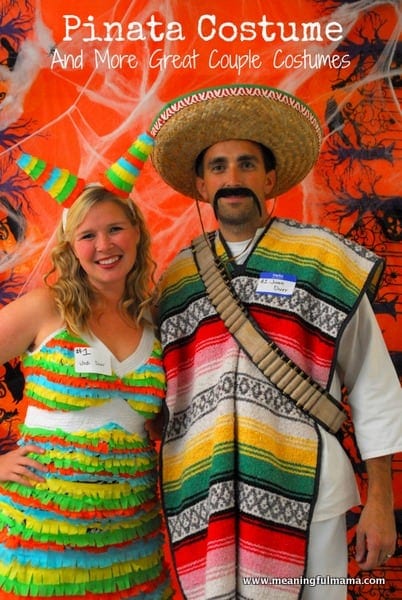 My husband and I were headed to a costume party. I am excited to bring you my piñata costume and more great couple costumes. I originally saw the idea at Coolest Homemade Costumes. I fell in love with the idea. 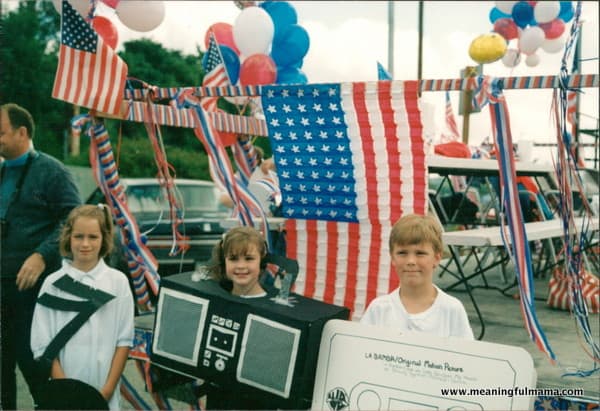 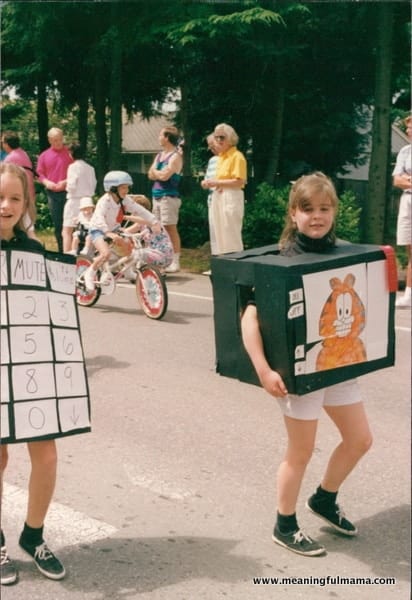 I have to share that making costumes has always been a passion. Whenever there was a chance to dress myself up (or anyone else, for that matter), I would take full advantage. The two pictures above show my sister, our cousin and her friend subject to my costume designs. There was a boom box, a tape cassette and a music note. Another parade I made them a TV and a remote control. These are just two example of years and years of creating. My mom actually has said that me doing the blog makes so many moments and interest I’ve had along the way all come together in a coherent way.

So although we are doing a different costume idea for Halloween (very simple), I have to say I jumped at the opportunity to make something for the costume party prior to the 31st. I wanted to give you a tutorial just in case you want to mimic it in the future. 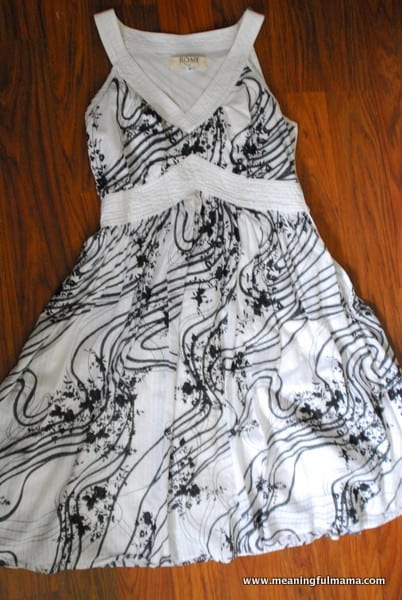 I had an old dress that I liked the shape, but the zipper hadn’t been working well. 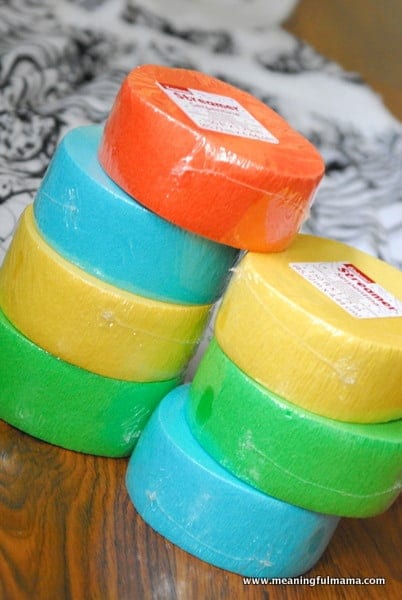 I bought streamers in some fun colors. I only needed about half a roll of each color for the entire dress. 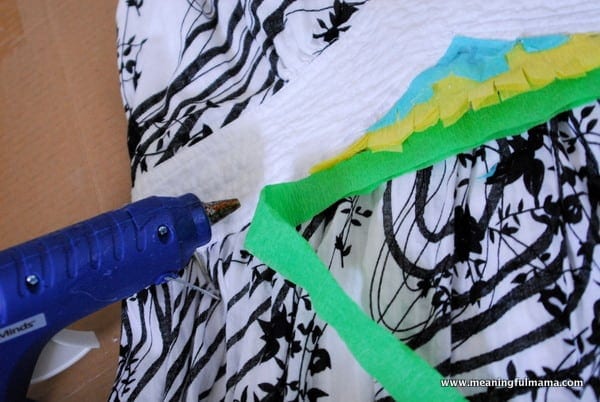 I started at the top of the skirt portion of the dress. It would have been easier to start at the bottom for time sake, but I wanted to really make sure I got the alignment right at the top. The first handful of layers I would fold the crepe paper in half. Initially, I was hot gluing it down and then cutting in the fringe. Later, I decide it was easier to cut the fringe before and then glue it down. Therefore, for the first number of layers I would fold it in half (length wise), cut the fringe and then glue. 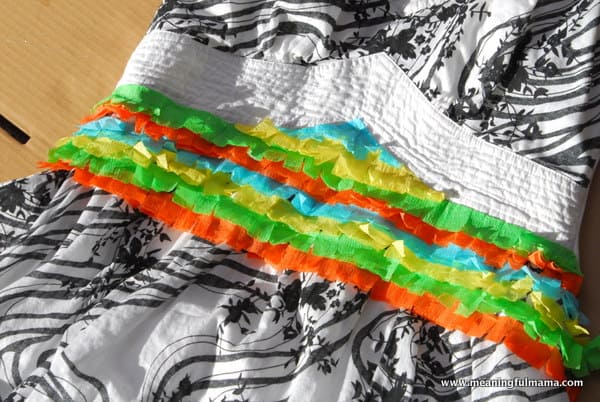 I continued in this fashion until I realized it was going to take forever to fill the dress if I folded the crepe paper in half (length wise) because the fringe length was small. I decided to graduate it out bigger. 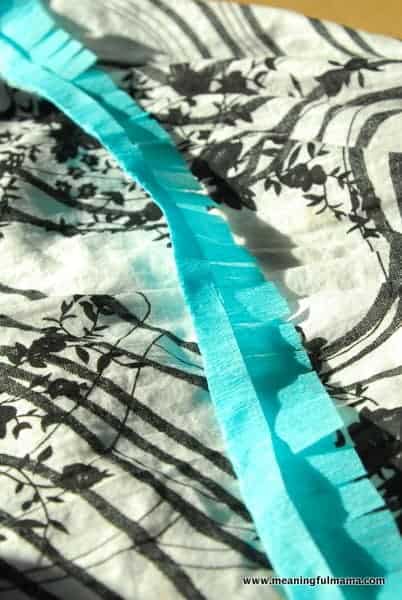 I wanted double streamers for good coverage, so on the next layer, I doubled the streamer and then folded 1/4 of it down. 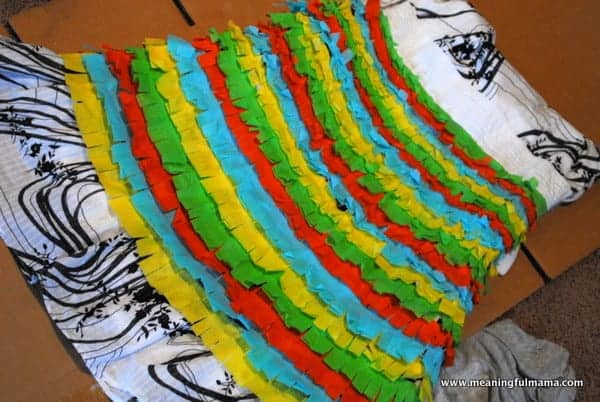 I continued that a ways and then graduated to layers that were the thickness of the streamer. 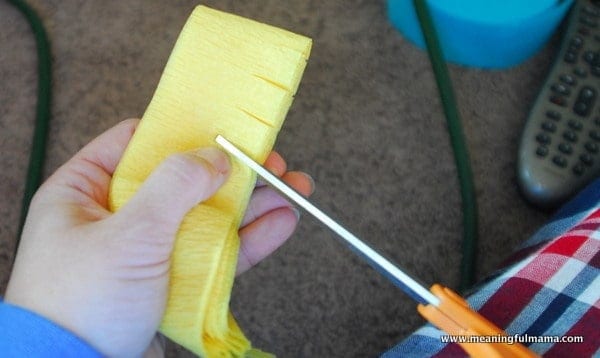 To make the process go quicker, I would fold up the streamer and then fringe it folded. It meant that I had to do less cuts. 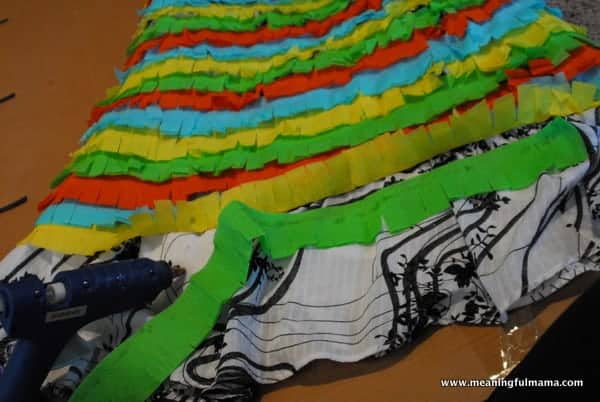 When I hot glued, I would fold the layer on top up and then hot glue it about 1/2 inch down so that when I folded the top layer back down it would lay over the top of the streamer. 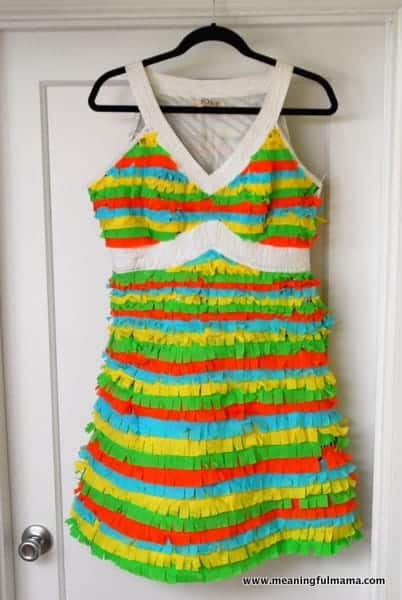 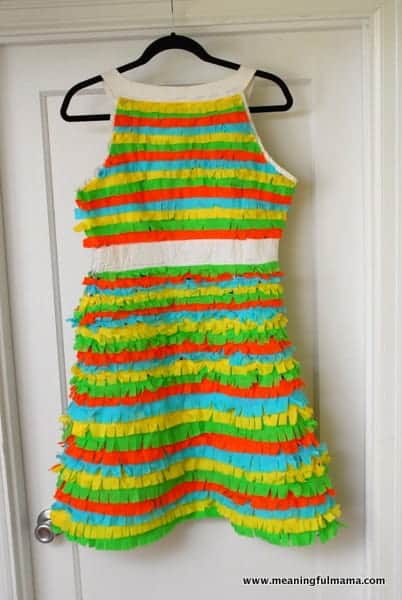 Here is the back of the dress. 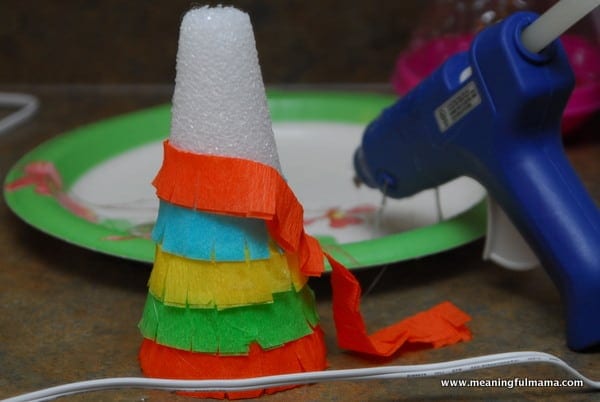 For the piñata ears I used styrofoam cones and glued the layers up the cone. You could use piece of paper to form your cone too. 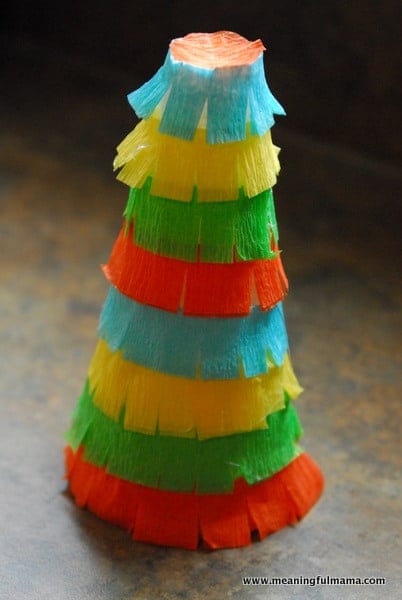 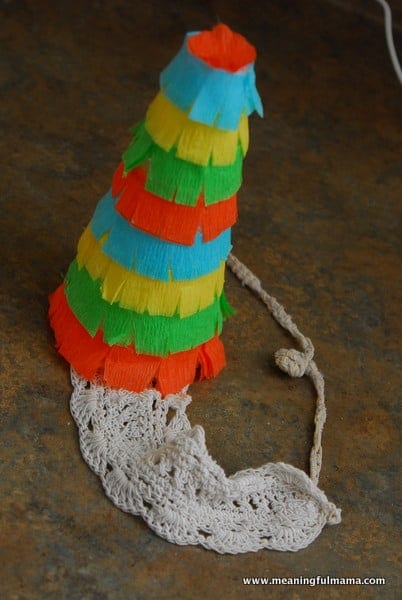 I glued and pinned the two cones to an old head band.

There you have the full look.

Here are some other friends from the party: 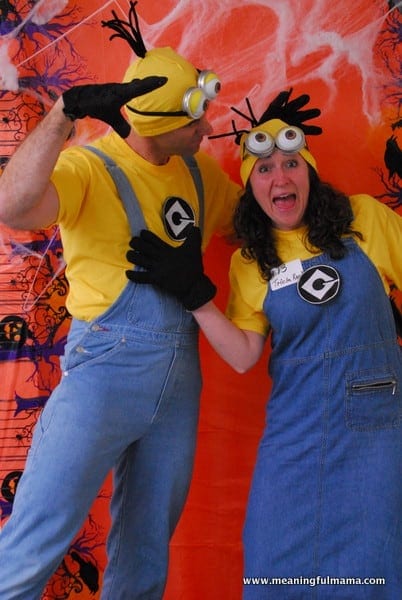 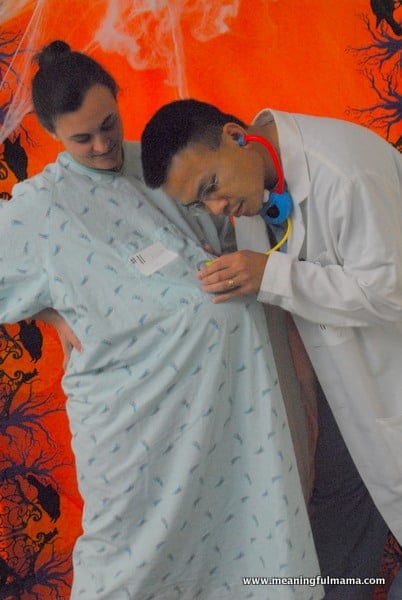 Doctor & Patient (No, she is not really pregnant, but she had a baby doll inside an old ball as the actual hump. 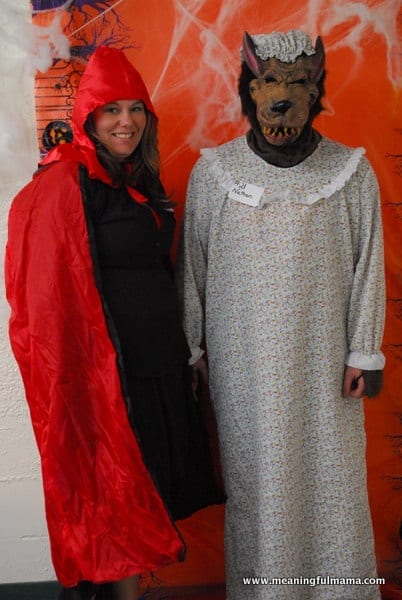 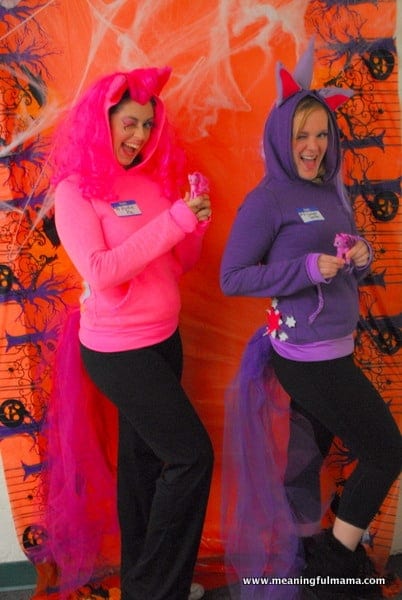 Friends (whose husbands couldn’t attend and didn’t want to dress up) as My Little Ponies. 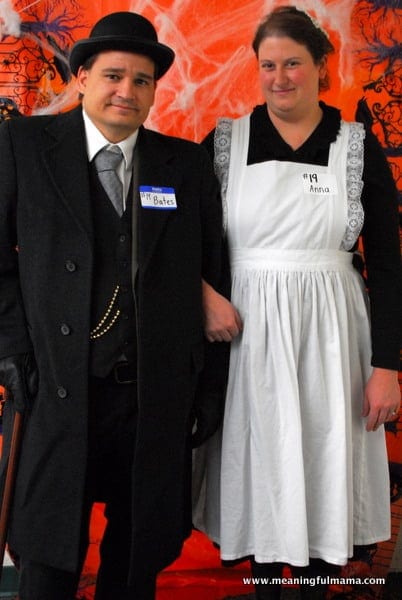 Thanks, Jamie. It’s always just been something I’ve loved. Hope all is well and that you’ve been feeling well! Love your costume too!

Thanks! We have so much fun with costumes.

Hi, Jodi. Your Pinata costume idea is awesome! May I include it in a couples and family costume roundup on OneCreativeMommy.com? Such a clever idea! (Pinned it.)

I came across your site while looking for couples’ Halloween costumes. While the pinata costume is super cute, I was disappointed that it was matched in the photo with a costume that is obviously a negative caricature of a Mexican person. The man’s costume is a pure stereotype and it perpetuates ideas that are divisive and harmful to Latinx communities, including people that could be visitors to your site, such as me. I understand that you were not wearing that costume, but by having the photo on your website, it implies you are ok for with perpetuating stereotypes. Stereotypes have no place in real life, and in this case, on a parenting site that looks to serve as a reference for educated, meaningful parenting.

Hello! I’m so sorry you feel that way. Having relationships with latinos and loving the diversity of all people, I always want to keep relationships and feelings of others at heart. That said, for me it’s a costume. Some people who dress up in an Asian costume might wear a sedge hat, although I’ve never met an Asian wearing one in person. If one was to dress up like someone from Germany, they might wear lederhosen. The fact is that modern Mexican people aren’t walking around in ponchos and big hats, but this is a part of their culture and history of fashion. I don’t see these clothing items as offensive but the poncho, especially, is a beautiful display of color and artistry. I’m sorry that you do think this is perpetuating a stereotype. I just see it as a celebration of diversity and heritage.

So racist and typical white privilege. You’re reply is similar to “I can’t be racist, I have a black friend” or “I can’t be racist I have an Asian wife” like as if that somehow that excuses you. I’m Mexican and yes Mexicans do dress like this in Mexico regularly. They’re more in tuned with their indigenous ancestors and indigenous women in Mexico do walk around regularly dressed similar to Frida.

Sorry you feel this way. I normally like to get to know someone and their heart before calling them a racist. I know me, so I’m OK with your opinions. I wish you all the best.

@ jodidurr I’m Hispanic and I love your relply to this holier than thou bully. People like that need to learn to live and let live. Where is the tolerance they love to preach to others? @Carrie STFU.

Thanks so much for weighing in on this, Carrie. As a white person, I can give my thoughts and opinions. There’s much more weight, however, from someone who is Hispanic that can add in their thoughts on the topic. I love the variety of skin tones in this world. I love the depth of culture, art and beauty that is brought to the world because we were all created differently. I go to a multi-cultural church, and I celebrate the kaleidascope of diversity I see in our congregation. I would hate for my limited experience, as a white person, to offend or harm anyone. However, I also believe we have gotten really sensitive on this topic – calling out racism where there is none. Don’t get me wrong – racism, unfortunately, is still a huge issue. Let’s just call it where it really is rather than dumbing down legit acts of racism by calling it everywhere. I really appreciate you taking the time to give your opinion.