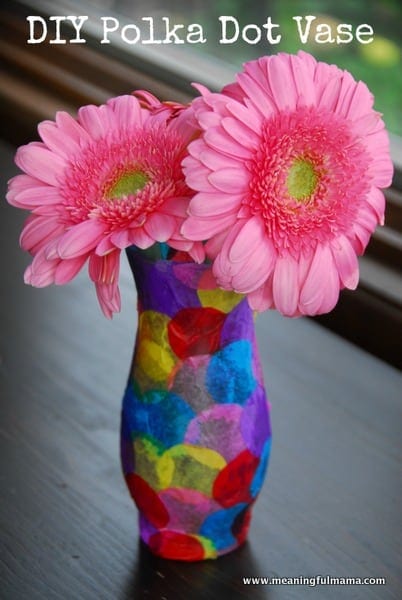 This polka dot craft was easy, inexpensive and a lot of fun. If you are looking for a great craft for kids of all ages, look no further. This would be a great gift for Mother’s Day, teachers, grandparents or just fun for you to have in your own home. I love the colorful results, and it was one of those crafts where I could show the kids the process, and they could do most of the rest of it on their own. 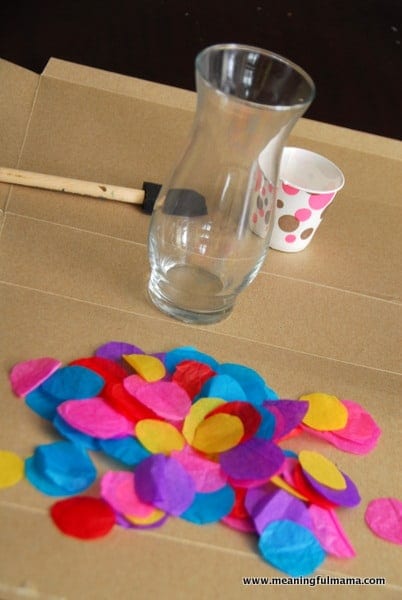 I bought a couple little vases at the Dollar Store. I cut out a bunch of colorful polka dots from tissue paper I had saved up from gifts. I wasn’t exact in my polka dot production. I just folded the tissue paper a bunch of times and cut out a small circle to expedite the process. The circles weren’t all exactly the same size, but I didn’t find it mattered in the end results. You’ll also need some Mod Podge. I used a foam brush and a disposable Dixie cup for easy clean up. I didn’t do this, but if you want lasting results, you could use some sort of sealant. I would ask someone at a craft store for the best solution. I may check the next time I am in because mine would be destroyed if the water hit the outside, which is likely in a vase. 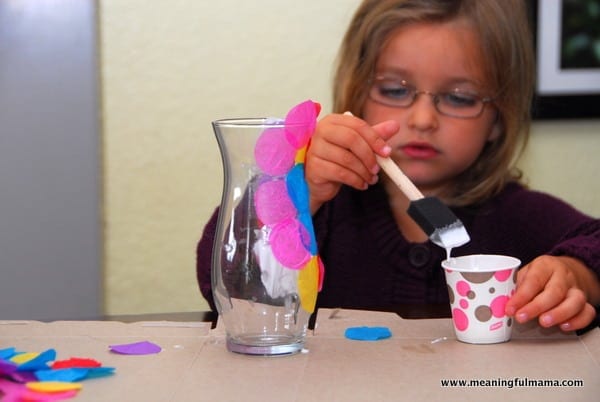 The first thing to do is apply a layer of Mod Podge to a portion of the vase. There’s not exact science to this, but you want them to add enough Mod Podge to be able to stick down a handful of dots, but not so much that it starts to dry while they are sticking the polka dots to the vase. 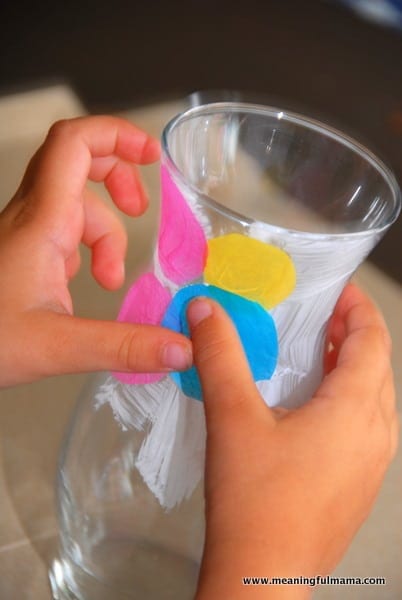 The next step is to stick the polka dots down to the vase, layering slightly. They may need to add a little bit more Mod Podge as they layer. Encourage a gentle touch so the tissue paper doesn’t rip. Keep working their way with Mod Podge and dots until the entire vase is covered. 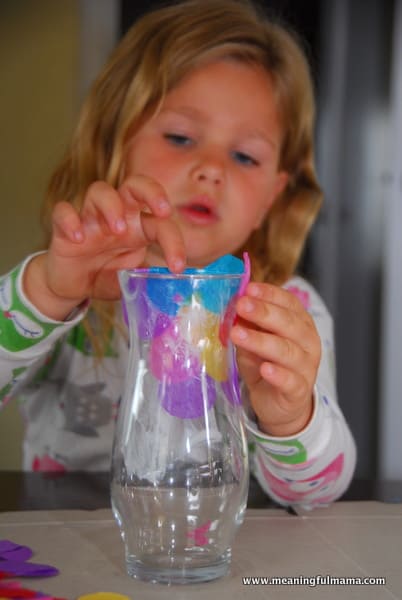 I encouraged them to remember to do a variety of colors so it was bright and they didn’t have a big clump of one color. I also encouraged them to make sure every part of the vase was covered. I also had them keep the dots sticking over the edge and go right up to the bottom. I trimmed the bottom and top with a pair of scissors aft the Mod Podge dried. 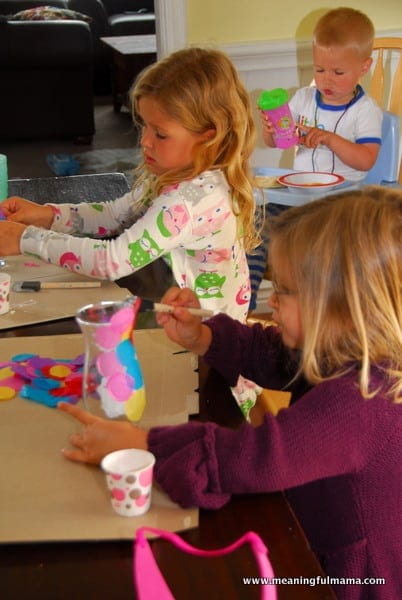 Here’s our set up. I had Mr. Man eating so I didn’t have to worry about him during this time. 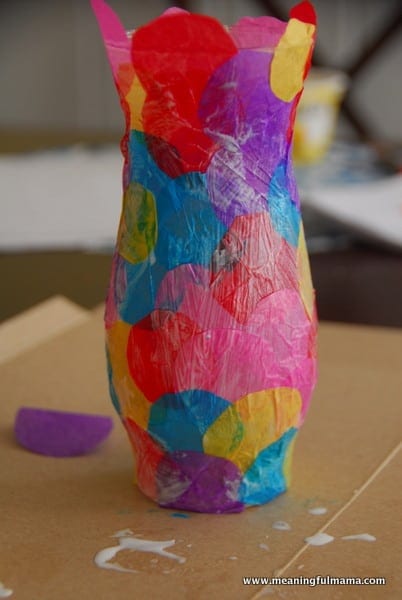 After they had stuck down all of the polka dots, I painted on the final top coat. I made sure all the polka dots had enough Mod Podge and laid somewhat flat. You can wait for this to try and add another layer or a sealer to the entire vase. 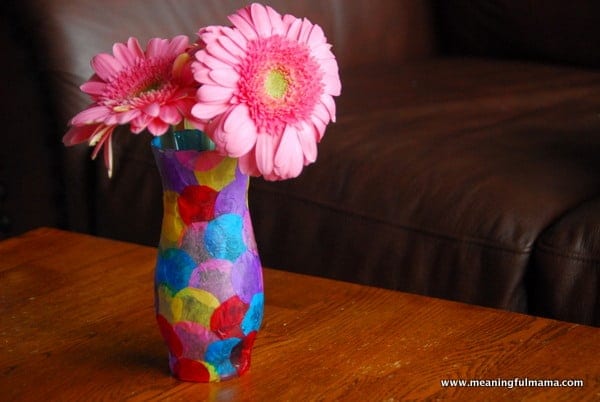 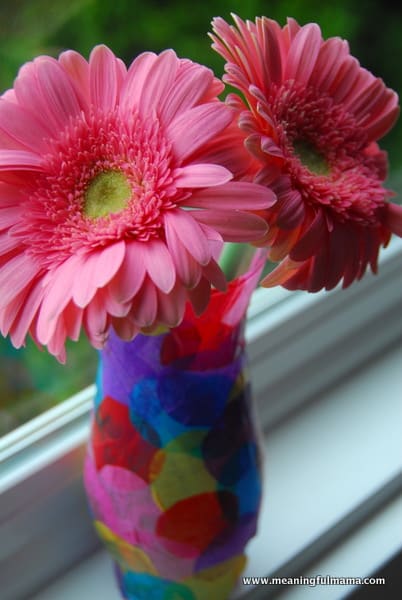 The results were so much fun. I love easy crafts that yield beautiful results. This may be the perfect craft for those of you who find craft times a bit more of a challenge. It’s easy!

This is such an easy and fabulous idea! Love love love. I am including it in my 12 best birthday party craft activities round up. Come check it out. http://www.sohosonnet.com/crafts-and-diy/12-birthday-party-craft-activities-for-kids/

Thank you so much for including me in this round up! Great collection.

Wanted a thriftier alternative to an art studio party for a 6 year old (friends ages 4-9yo.) This was perfect. Inexpensive, beautiful and worked well according to each child’s abilities. We put real flowers in them and then put them in pretty bags for an alternative to the usual party favor. It was perfect. Thank you for sharing.

I’m so glad this worked out well for your party. It sounds like it was a great fit. I also love the idea of sending their project home as the party favor. That’s so much better than the usual mish mash of party favors. Thank you for sharing!!

Hi, how long does it take to dry? Will the girls be able to take it home dry? Thanks

It was so long ago, and I wasn’t in a rush with it, so I don’t remember calculating. I did some Googling and found that it should take an hour to dry to the touch but a little tacky if it’s a thin coat. It will be more solid in 24 hours and the recommended time to cure is 72 hours. I hope that helps.

I love this. Will be making this for sure.

Have so much fun! Thanks for letting me know.

Thank you for this wonderful idea!!Does gift wrap tissue work best? I’m having trouble cutting it without ripping and I wonder if I might be able to use a thicker paper.

I did just use regular tissue paper. I’m sorry you are having issues. I wonder if you folded or stacked a bunch if that would be easier. I think that’s what I did. I hope you end up with a great product anyway. Enjoy!

0
Reply
115+ Of The Best Homemade Gifts Kids Can Make! – mrespresso