“Stop fighting in front of your kids!” We hear it all the time. Is it the truth or a parenting myth? As I am walking through marriages with friends and strangers in a marriage ministry called ReEngage, this is something I’ve been reflecting upon recently. I’ve given it some thought. I’ve talked to mentors. I’ve looked at a few articles. Today I want to share with you some of my thoughts and contribute to the conversation about fighting in front of kids. If you want to know more about how to really make a positive impact on your marriage and have less fighting, I would encourage you to read this article also. 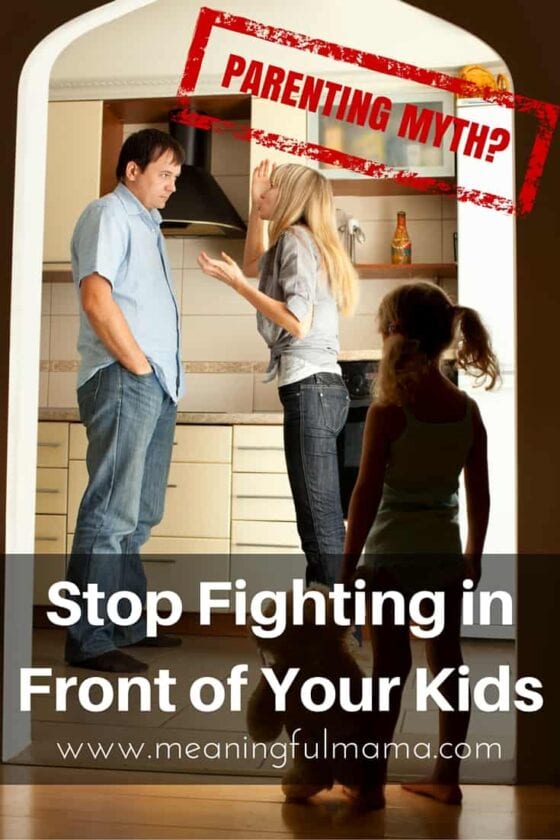 In my post “How Expectations Influence Marriage,” I pointed out that some people walk into a relationship with expectations for marriage based on how they were raised.

Some were raised in a family where fighting was part of the deal. It was ugly and made them feel bad. They walked away from their childhood experience vowing that their marriage – their life – wouldn’t be like that. They may avoid conflict in marriage and stuff their feelings or the expression of opposing opinions because of a fear that they will turn out like their parents.

The opposite may be true. They may find themselves surprised when they discover that what they promised to avoid is more of a pattern for them than they ever intended. Fighting has been such a way of life for them, that they repeat the same patterns established in their childhood home.

There are others who say, “My parents never fought.” These individuals might walk into marriage expecting things to run smoothly. Sometimes discouragement sets in because fighting was never observed as they were growing up. Some start to believe there is something wrong with them, their marriage or their spouse and may begin to think they married the wrong person.

Let me encourage you that fighting is a normal part of marriage. In fact, I’ve read that often times when there is no fighting in a relationship it can be a sign that there is trouble down the road. Couples MAY BE stuffing their feelings, not able to communicate what is really going on. The relationship, therefore, has hidden emotions or sin that never really surfaces. It may end up exploding down the road, but even if not, living in the dark is not how you are intended to live life with your spouse.

I do want to acknowledge that there are some marriages where the couples really don’t fight much. Temperaments may be more laid back and grace filled, but from my experience, fighting is more of the norm than the exception.

John Gottman is the country’s foremost relationship expert that runs the love lab where he studies marriage. He can predict the outcome of a marriage with high accuracy, as noted in his book “The Seven Principles for Making Marriage Work

” (affiliate). In regards to observing fighting in his lab he says, “I predict their marriage will falter not because they argue – after all, I ask them to. Anger between husband and wife doesn’t itself predict marital meltdown…the clues to Dara and Oliver’s future breakup are in the way they argue.”

I would encourage you to read the book referenced to understand more about how to fight fair and enter into healthy disagreement with your spouse. I will also be addressing this topic in my next article, “How to Fight with Your Spouse.”

The main point I want to make is that having conflict in your marriage is not a bad thing. The two most important factors are how you fight and how you make up.

Stop Fighting in Front of Your Kids – Parenting Myth?

After establishing that it is OK to fight with your spouse, I want to address the issue of whether or not you should fight in front of your children. My belief is that it is healthy and normal to have conflict in front of your children, but there are important ways to disagree so that children feel safe and get a true picture of the beauty of forgiveness and reconciliation.

What I am seeing in some marriages is that people walk into the marriage with the expectation that they shouldn’t fight, and if they do fight there is something wrong with them. Often times, this expectation stems from not seeing their parents fight (as talked about above). They get into conflict, and they feel paralyzed to deal with it because of fear and a lack of an example of how to fight fair and how to reconcile. It was most likely not the case that their parents didn’t fight, but their parents chose the parenting myth, “Stop fighting in front of your kids.” Lovingly, parents wanted to shield their children from pain and conflict. The unexpected outcome is that some enter into marriage expecting bliss and haven’t had the model of what conflict and resolution looks like within marriage. This is not the picture we want to pass on to our own children. It’s a mirage.

Our relationship with God is based on a willingness to admit that we need a Savior that forgives. In the same way, our relationship with the person we married doesn’t reflect a good marriage free from conflict or sin. Instead, it is a picture of forgiveness. It is choosing to love someone else and be committed to that person, despite all of their faults. It is choosing grace amidst the ups and downs life has to offer.

It is healthy for our children to see that we do have disagreements. We try and voice our opinions in love and respect, but sometimes we will make mistakes in how we fight with our spouse. When we recognize our own contribution to the breakdown and acknowledge our sin in the communication, kids get to see how to own up to faults and receive forgiveness. They should be able to witness reconciliation and healing.

There are definitely times not to fight in front of your children. Certain topics should be avoided because of how they might make the child feel or because they are not age appropriate. I am going to dive into the details of that more in my next post, “How to Fight with Your Spouse.”

Just because I believe it is OK to fight in front of kids, I don’t want this as an open invitation to unleash all the ugly that can be involved in conflict. Remember what I said? “The two most important factors are how you fight and how you make up.”  Also make sure that the kids see you ask for forgiveness and mend the relationship.

I will be unwrapping this topic more next, but I want to establish why I believe fighting is normal and how it can be healthy for our children to witness it so that they have a more accurate picture of marriage and a deeper understanding of God and the gospel message.

Join me next week for the continuation of the discussion.