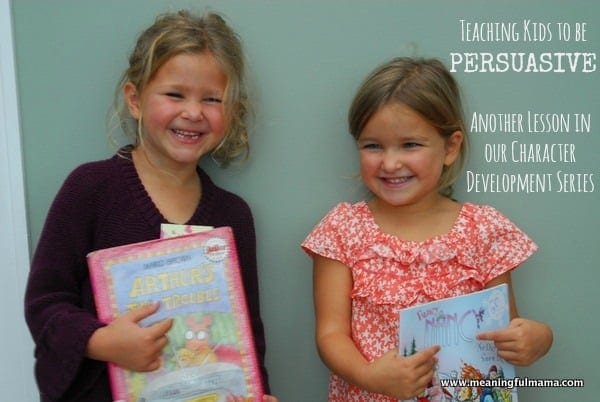 Persuasiveness
“And the Lord’s servant must not be quarrelsome but must be kind to everyone, able to teach, not resentful.” – 2 Timothy 2:24
This week we were working on teaching kids to be persuasive. I hope you’ll look under the character development tab and “persuasiveness” to find more lessons and the reason behind this character trait choice. Kids will grow into learning to create persuasive arguments in essays. They will want to bring forward their ideas and opinions and, with grace, learn to try and persuade others of some of their ideas. They of course, will need to learn to listen and try and understand another person’s point of view. However, after listening, they may be convinced that they have a thought or plan that might make more sense. We live in a world where our kids are often taught to believe that anything is acceptable and everyone can be right. However, we believe there is ultimate truth, even if that is counter cultural. Therefore, we want to train our kids to think logically and, with a humble heart, be able to persuade others of the truth. It’s a delicate balance, but one that must be approached in love. Therefore, I want to teach my kids to be able to be persuasive with respect and solid arguments. “Arguments” often time infers fighting. However, the kind of argument I am speaking of involves “a reason or set of reasons given with the aim of persuading others that an action or idea is right or wrong.” 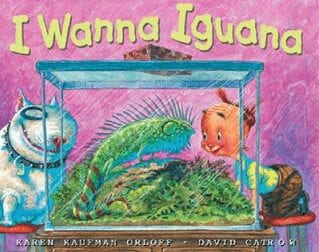 The first thing we did was look at the book, “I Wanna Iguana,” by Karen Orloff. I would look into checking this book out at your local library. You can also purchase it at your local book store or on Amazon. This book is about a little boy trying to persuade his mom to buy him an iguana. It’s a really cute book, which shows their letters back and forth. I pointed out that the son is being respectful in his approach with his mom. He is also bringing new information to the table rather than just using the same reasoning over and over and over again. I also talked about how the little boy in the story was trying to remind his mom about what a wonderful child he is every time he signed the letter. Being a pleasant person does make people want to listen to what you have to say and are more likely to be influenced by your words. I did say that they may have a reasonable argument but still might not get what they want. 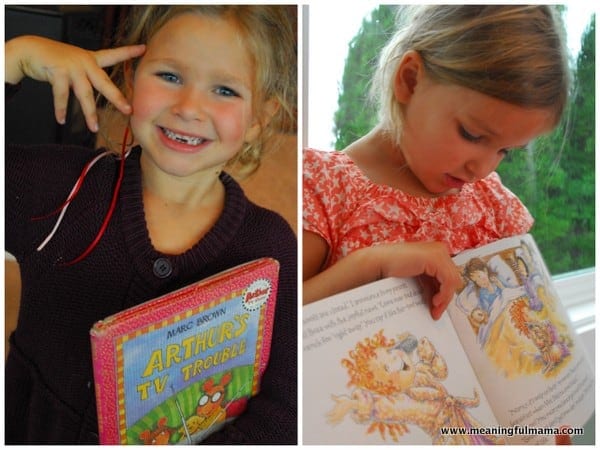 The next thing I did was have them try and persuade me. I had them each show me a book they wanted to read. They both had to present their ideas as to why their book would be the better book to be read first. I encouraged them to come up with a variety of ideas that might appeal to me as a mom. I encouraged them to always come to me with respect and new information. I reminded them that in our family whining and crying doesn’t get them anything, but a pleasant nature can persuade the outcome. They then went to work to try and convince me of their book as first choice. Both of them used arguments that started with “I like…” over and over again. After trying to convince me, I explained that it might be a wiser choice to pick out the things you think the person they were trying to persuade would like. They could say things like, “We would all enjoy this because it is a new book I got from the library, and we’ve never read it,” or “I think you would enjoy it because it teaches a good lesson.” In the end, I said I chose Kenzie’s book. One of the reasons was Abby’s overall attitude. The picture below shows she looks grumpy, but she was actually being hyper goofy the whole time, which wasn’t helpful in wanting me to do what she wanted. I also explained that I liked that Kenzie opened the book and was able to show me specific things she liked. Apparently Kenzie was persuaded by Abby’s words because she decided she wanted to do Abby’s book first. We did end up reading both books with all of us. 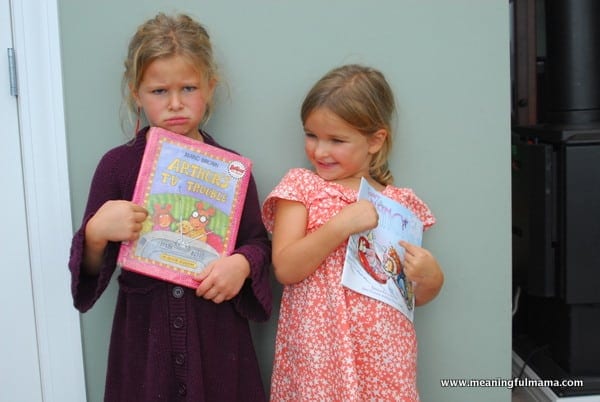 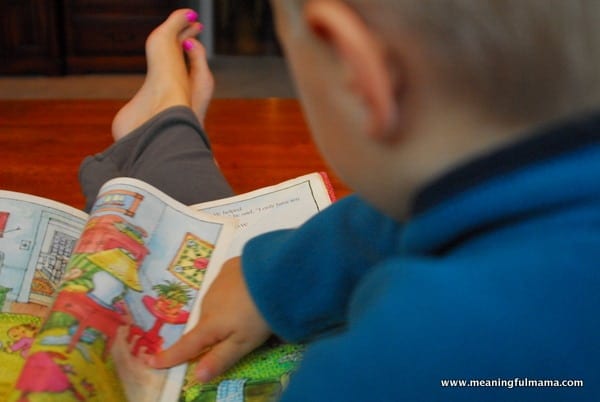 I wanted to jot down a brief remark to appreciate you for the nice tips
and tricks you are giving out at this website.
My long internet lookup has finally been recognized with really good tips to exchange with
my best friends. I would assume that most of us visitors are rather endowed to be in a useful place
with many marvellous people with very beneficial tricks.
I feel quite blessed to have seen your entire site and look forward to tons of more thrilling minutes reading here.
Thanks once more for a lot of things.

Great ideas! That iguana book sounds like a bunch of fun too. I’ll be perusing your archives to read more of your Charcter Development series, for sure. Thanks for sharing! Visiting tonight from Mom’s Library.

I love your website! Thank you so much for taking the time to share your experiences with us. In turn, I’m sharing it with my wonderful daughter-in-law for use with my three youngest grandchildren – aged almost 9, 7, and almost 5. [The 7-year-oold is the only girl amongst the younger group. I have 5 more grandsons, but only 1 other granddaughter, the eldest at almost 25 and the one responsible for making me a GREAT-grandmother; THREE times over!] All of the “almosts” I was being quite literal about; they ALL have birthdays in December, including another grandson who will be 19…it is a busy month for us!]

I have also found that many of your craft ideas work well with my fellow residents, in the craft classes I teach here where I live. [The “here” refers to a long-term care facility for the aged and those who need some type of dependent care. I am only 68, but have had several health issues in recent years, and am now learning to adjust to life as a wheelchair-bound adult.]

I began the classes as a way to ‘connect” with my younger granddaughter [age 7] who attends along with some good friends from church [sisters aged 6 & 8] – courtesy of their mother who brings them over each week, and stays to assist me. We have recently been joined by two of the other residents here; a 73 year-old grandmother [only five years my senior] and an 87 year-old great- grandmother, neither of whom have had much experience with crafts or any type of “do-it-yourself” -ing. They too, are loving the learning experience.

We have a great deal of fun, and there is much anticipation over each new week’s project, especially now that we have embarked on a “new” venture, known as “DIY Christmas”. we are creating something new each week, from bracelets and other jewelry to tree ornaments, and giant gingerbread man placemats, all designed to be given as gifts.

As their small pile of presents grows, so too does their excitement and anticipation in the recipient’s pleasure at receiving a handmade and homemade gift. This was the inspiration for the two-month long “DIY Christmas” from the beginning., and my own joy is growing that another generation will understand and undertake the task of continuing to MAKE gifts and other tokens of their love, thereby reaping the internal warmth and special joy that comes from sharing their love in this manner.

Again, I wish to extend my thanks for your efforts, and to pray for the Lord’s blessings upon you and yours.

Thanks so much for writing such encouraging words. I’m so sorry it has take me so long to write back. I absolutely love the influence you are having on your grandchildren as well as the women in your facility. I imagine it must be hard and frustrating to adapt to a new life being wheelchair bound, but I can tell you are the type of woman who makes lemonade. I love to hear that my blog and the projects have been a source of inspiration and fun. I absolutely love to hear about your DIY Christmas and the amount of gifts you are able to produce. You are creating cherished memories as well as things that I know will last way into the future. I also love your heart, and it has been such a blessing to me to receive this note full of joy and life. Thank you!