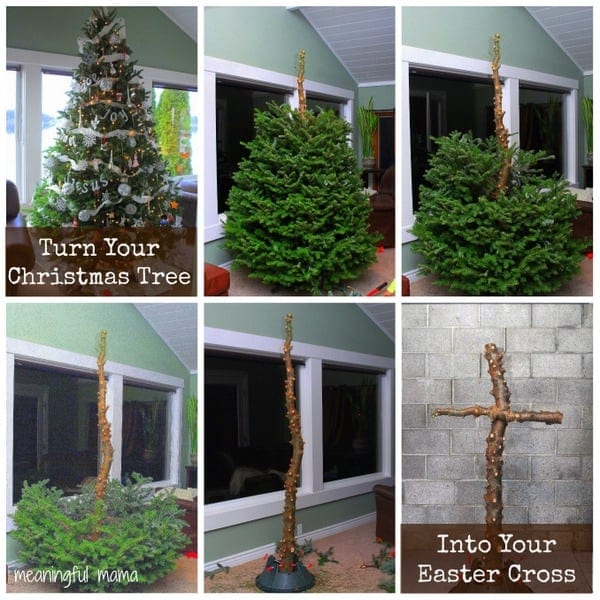 I’m very excited about this post on how to turn a Christmas tree into an Easter cross. This is an amazing way to tie the two holidays together. On Christmas day we are celebrating Jesus’ birth and entry into this world. On Easter we celebrate his victory over the cross. He was killed as prophesied in Isaiah 53, which was written over 700 years before Jesus even walked this earth. He rose again, proving that he was the expected Savior. His resurrection and appearance to his disciples and others is what caused a group of trembling, hiding and scared group of people to boldly come out and proclaim that he was no longer in the grave. Ten out of the twelve disciples became a martyr for their faith. Their deaths hang on the truth of the crucifixion, and they went to their own graves proclaiming it was so. I believe men will die for what they believe to be the truth. How many men would die for a lie? These men believed that Jesus rose from the dead. They believe because they saw him. We can hang our faith on Christianity because the evidence holds firm. Although I am often left with a lot of questions when considering God, I believe I have put my faith in something that has been proved faithful. So, on Christmas and Easter I celebrate these truths. How much meaning can be revealed when you turn your Christmas tree into the Easter cross? It can really help create a connection for your kids. My friends and mentors, the Pritchards, have been doing this tradition for years. I was inspired by their tradition and we decided to adopt it as our own this year. 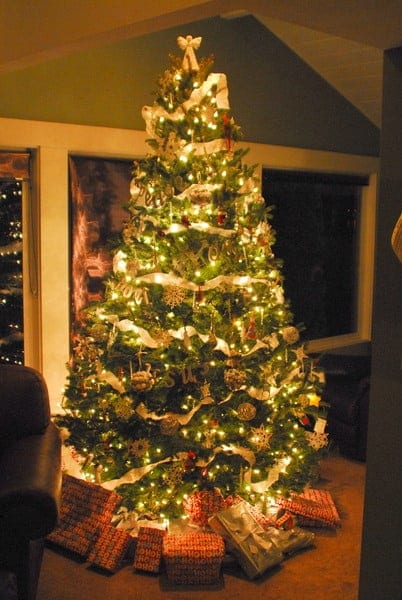 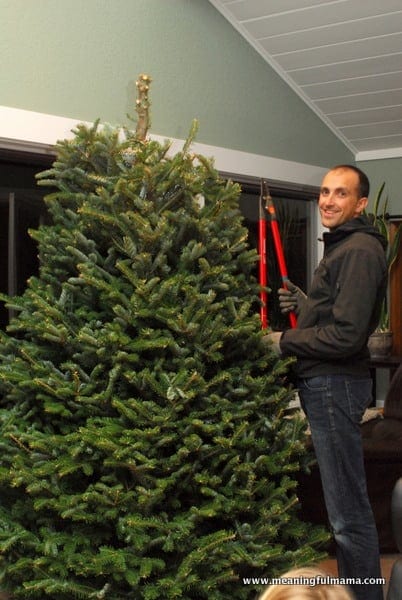 On New Year’s Day we took down the tree. I removed all the decorations, ribbon and lights to make it a humble tree again. I didn’t realize it until this moment, but it is much like what Jesus did. He is the King of Kings and Lord of Lords. He left all of his glory and splendor. He was celebrated by both kings and shepherds on the day of his birth. Yet, Philippians 2:6-8 says that Jesus, “being in the very nature God, did not consider equality with God something to be used to his own advantage; rather he made himself nothing by taking on the nature of a servant, being made in human likeness. And being found as in appearance of a man, he humbled himself by becoming obedient to death, even death on a cross.” Our tree, clothed in splendor, became a humble cross once it was stripped out of all its splendor. 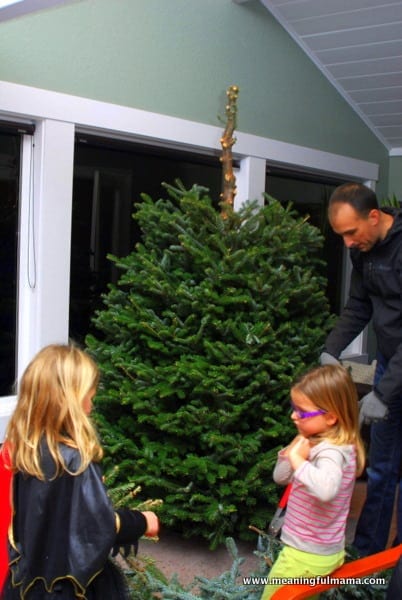 My husband removed the branches of the tree with clippers. We set the yard waste bin right outside the door, and the kids helped carry the branches to the container. 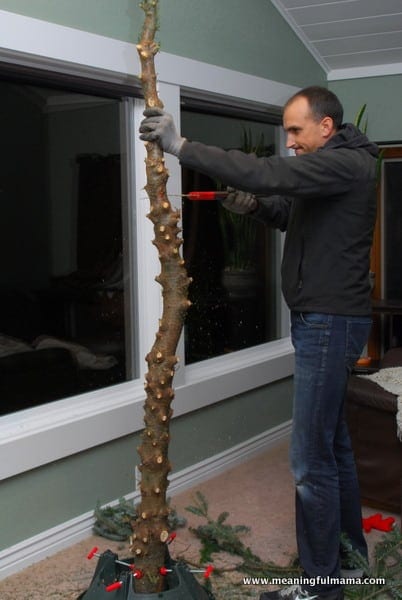 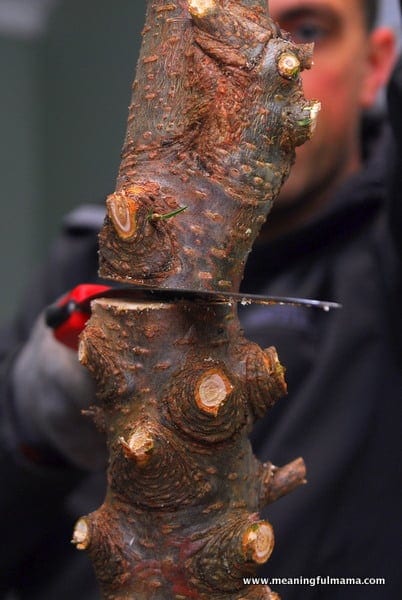 Once all the branches were removed, my husband used a hand saw to cut tree trunk about 1/3 from the top of the tree. This would become horizontal part of the cross. 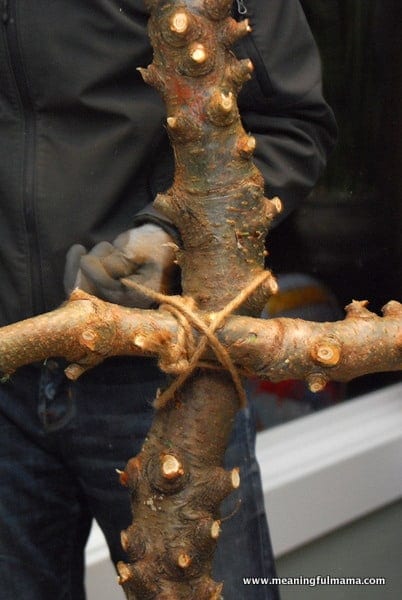 We hammered in two nails and then used twine to secure the horizontal piece. 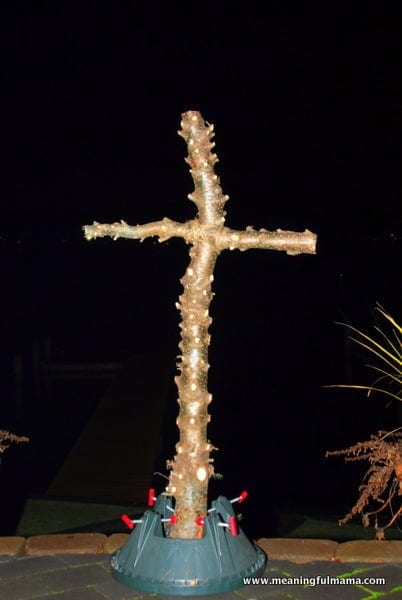 I’m super excited about the results. I think I want to stick this at the end of our dock. I am waiting for a beautiful sunrise to get a fabulous picture to contribute to this post. I hope this idea helps your create meaning out of your own tree. I’d love to be sent pictures of your Christmas tree turned Easter cross.

This is so beautiful! I don’t think my husband would have the patience, but maybe we’ll do a scaled down version lol 🙂 Blessings, Amy

Thanks so much. My husband turned down the idea last year too, but it really wasn’t as hard as we thought. I could have even done it, so if you are inspired, you might need a little help to get the taller branches, but I think you’d love the results.

Thanks for posting this! When I was little I knew a guy who did this and I’ve been looking for a good description online for awhile so that we can start this tradition on our family. THANK YOU!

I’m so glad this was helpful. I was just kind of winging it, but I’m excited about how it turned out. Thank you for commenting!

I have been doing this for 20 years with my family. On Ash Wednesday, I drape our tree in purple. Good Friday: Black. Early on Resurrection Sunday: White.

It’s a tremendous witness to our neighbors.

I love that’s you’ve been doing this for so long. Thank you for sharing. You are so right that it’s a great witness and conversation starter.