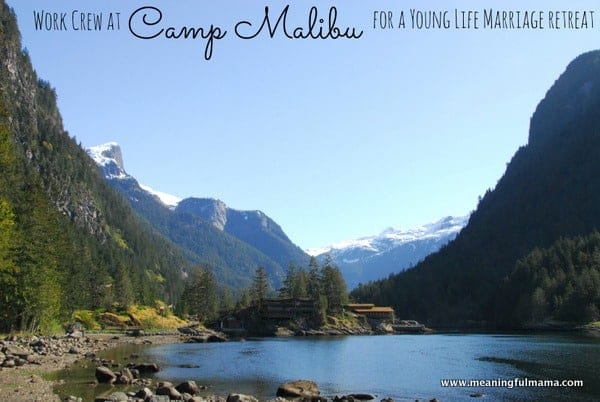 Have you ever heard of Camp Malibu in Canada? It is a Young Life camp built right in the middle of pure beauty. Most of this blog is sharing ideas that inspire parenting. However, part of this blog is just sharing a bit more about me and our life. I am a mom and trying to do that well and inspire others in their parenting is a passion. Yes, I completely screw that up. I have times of feeling defeated, and at other times I see victories. Despite it all, I want to do it right. Another thing I am passionate about is marriage. That I want to do well too. I also want to inspire others in their marriages. I’ve considered doing a “Marriage Monday” series on my blog to try and build hope for that covenant relationship. I’m still playing with that idea in my mind. Let me know what you think. Part of being passionate about marriage is helping to build up the marriage relationship. If you have been following Meaningful Mama for very long, you know that I receive a lot of mentorship in parenting from the Pritchard family. David has been the director of Young Life in our area. He now is the Marriage and Family minister at our church as well as working part time with Young Life with the role of helping to encourage and strengthen marriages for Young Life staff. Part of his job was planning and speaking at a marriage conference at Malibu this year. They needed a team of volunteers to work to make the retreat happen. That’s where my husband and I decided to get involved. This past week we spent 6 days at Malibu  on “work crew.” You can watch a video about the Malibu camp here. In the summers it is used for high school student camps. On the off season, other groups can use the camp. The summer staff consists mostly of volunteer high school work crew and college age interns. They are obviously not there now, so they needed a group to man the kitchen – prepping, cooking, baking, cleaning, serving, bussing and the infamous “pit crew” was in charge of all the dishes. This was hard work. We spent 10-14 hour days serving in that capacity. 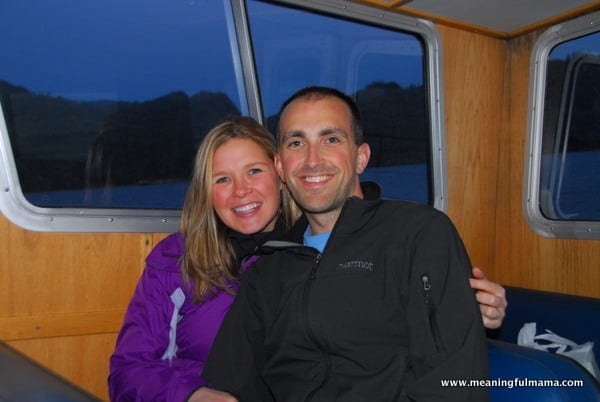 Our travel there ended up being more of an adventure than we had hoped. We got stopped at the border. We look pretty suspicious, don’t we? We had to pull over and go through the immigration office. We hadn’t planned enough time for that and the ferry traffic, so we missed our first ferry. If we missed the first ferry, there was no way we would catch the foot ferry that would take us to the camp with part of the team. So, we caught a later ferry, drove for a bit and then had to hire our own water taxi to take us to the camp. Yes, it cost a bit, but we figured it was better than spending the money on a hotel room and then the boat the next day. 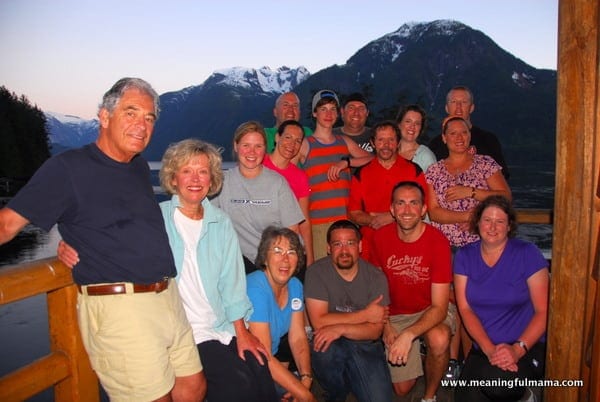 Here’s our great team of volunteers from our church. It was really a fun group of people to serve next to, and I don’t think I’ve laughed so much in a long time. We had some real work horses here and it felt good to have a team of people rallying together to make things work and have fun doing it. 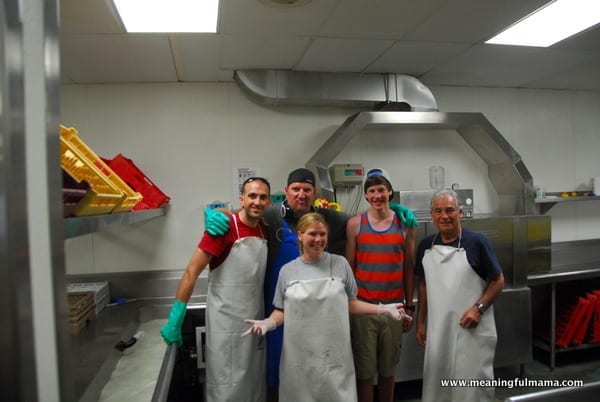 I was in the “the pits,” and I was perfectly fine with that. I had a fun, hard-working group. My husband was the “pit master,” and I loved serving by his side. I also liked that I didn’t have to be up front serving guests. I have always thought of myself as an extrovert. Anyone who knows me would assume the same thing. However, being a mom has changed me a bit. I find I have so much energy on export. At the end of the day I often just feel like crawling in a hole and being alone. To not have to be “on” was a bit of a relief. It felt nice to serve in the background. 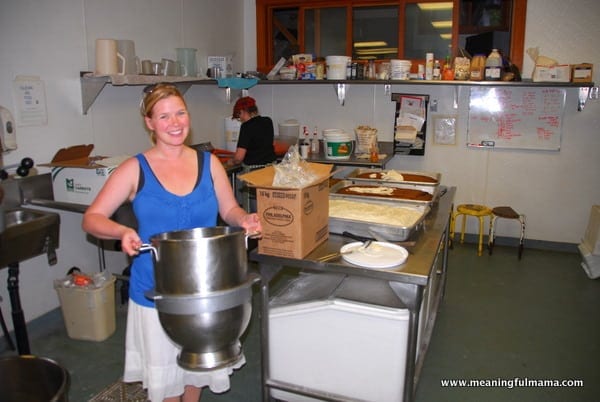 Despite volunteering for the pits, my role quickly changed. Well, it didn’t really change, I just got an extra duty. I was still in the pits. However, the chef walked in, pointed at me and said, “You! I heard about you. I have a job for you.” Then, he walked away. I wasn’t quite sure what he had heard or what my job would be. Eventually I approached him and asked what he heard and what my job would be. He said, “I hear you do desserts.” So, I was promoted to the baker. I had a lot of fun in this role. You see the mixing bowl I am holding. That’s the small mixing bowl. There was actually a giant mixer I was working with as well. I had another friend in the baking area with me, and we were able to tag team. I had a couple recipes he wanted me to use, but other than that I had a lot of freedom. I did a really easy cobbler that I’ll be bringing to you soon. I had to be creative in some of my adventures in baking the breads and desserts because I didn’t have my recipes, and a bunch of his food order (he gets one weekly) didn’t come in, so at times I was working without eggs and butter. I just had to make it work. That was a big highlight for me. I was thinking, “I’ve always wanted to be able to just bake and not have to do all the dishes.” Then I realized that I was actually doing my own dishes too. Oh well! This inspired my creativity in the kitchen, and I’ll be able to bring a few new recipes to you out of this experience. 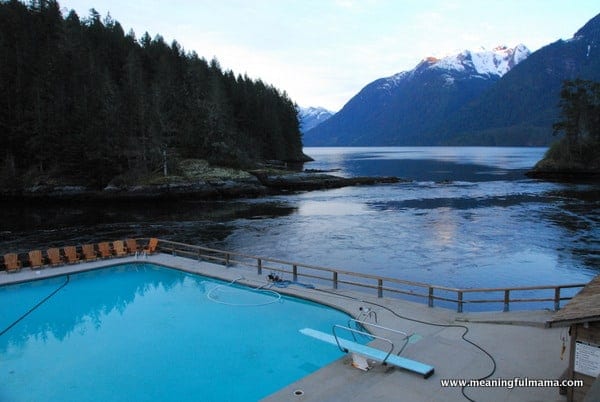 It was a lot of work, but we found a bit of time to play as well. The weather was gorgeous – remarkable for early May. They also heated the pool to 80, so our afternoon break was either by or in the pool. We also would get off at 9 or 10 at night and spent 2 different nights having night swims. To get off the feet and enjoy the pool was absolutely amazing. We also had the tired jollies, so there was a lot of laughter and joking poolside at night. We even found the Young Life costume closet, which is never safe if I’m around. 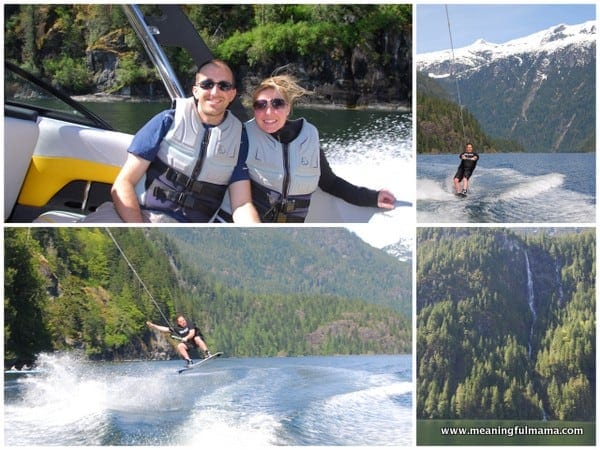 One of our breaks we were able to head out on the ski boat to watch our good friend water ski in one of the most gorgeous settings you can imagine. It was warm in the air but way too cold for me to brave those waters. 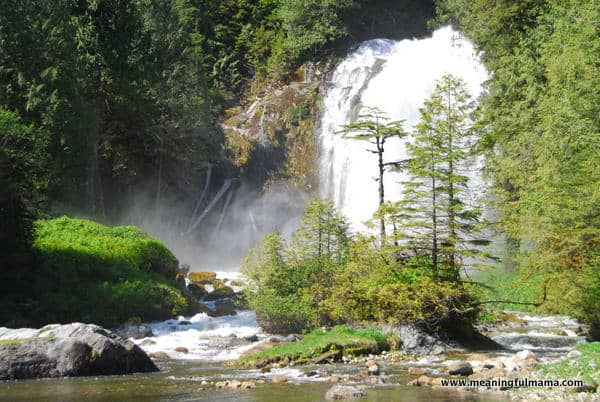 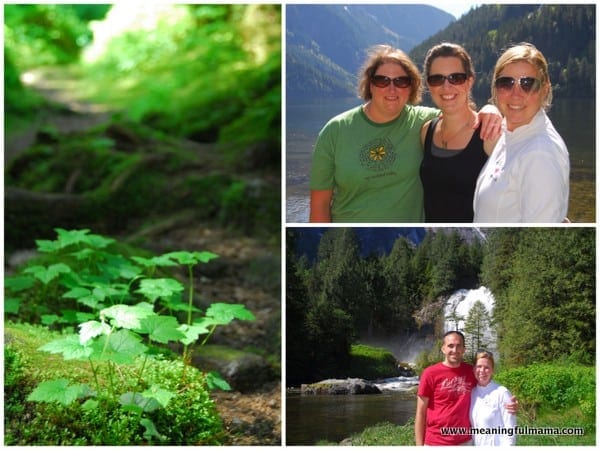 Another break we were able to take a boat ride to Chatterbox Falls. It was a small hike from shore and a great view of a waterfall that was so full because of the hot weather and the melting snow. It was gorgeous, relaxing and a great way to spend the afternoon off. 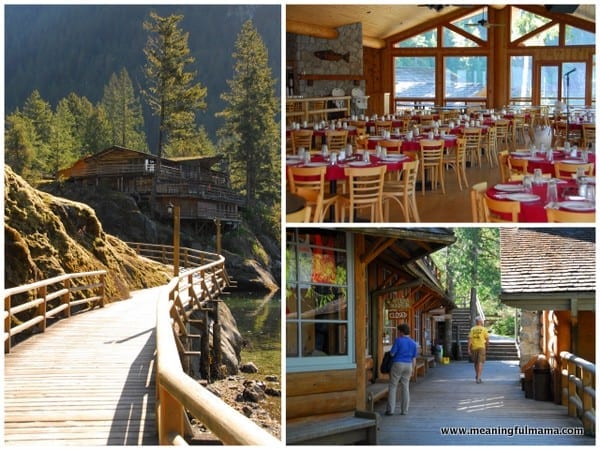 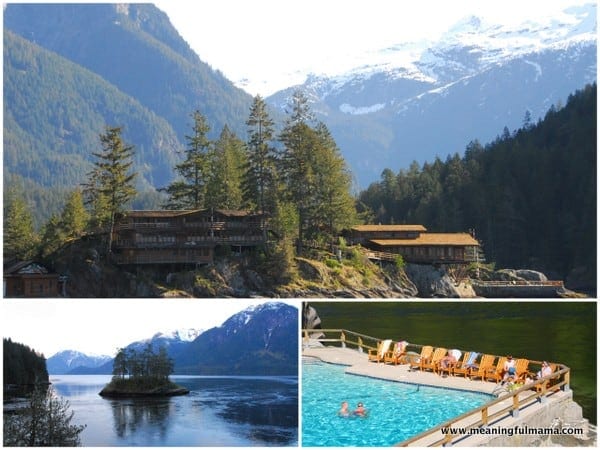 Malibu is a magical place, built in God’s beautiful creation and has an amazing ministry. We felt blessed to be able to serve people focusing on strengthening their marriages. Ours was also strengthened through this experience. 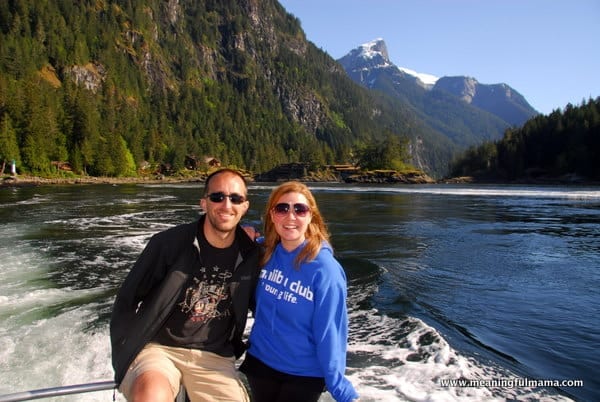 Here we are leaving the camp. 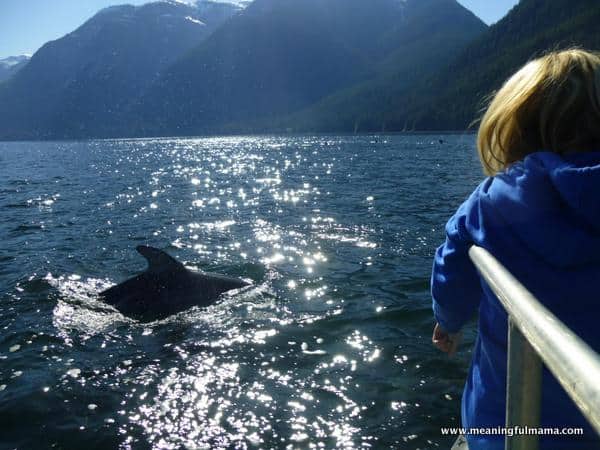 What a goodbye we had too. As we were on the boat leaving Malibu, we were visited by a pod of dolphins. It was estimated that we were surrounded by over 100 dolphins. That’s me in the corner of the picture, and they were literally swimming under and all around the boat, playing in the wakes. Amazing!