This No Bake Triple Layer Ice Cream Cake is a cake I used to do often before I really started getting into the hobby of cake decorating with, mostly, fondant. This poor idea has been neglected. It shouldn’t be! It is delicious and absolutely easy. My husband loves, loves, loves ice cream. Whenever I say I’m going to make a dessert he says, “Just bring ice cream.” Tacos and ice cream feed his soul, and he could probably stick with that for every meal and be completely satisfied. 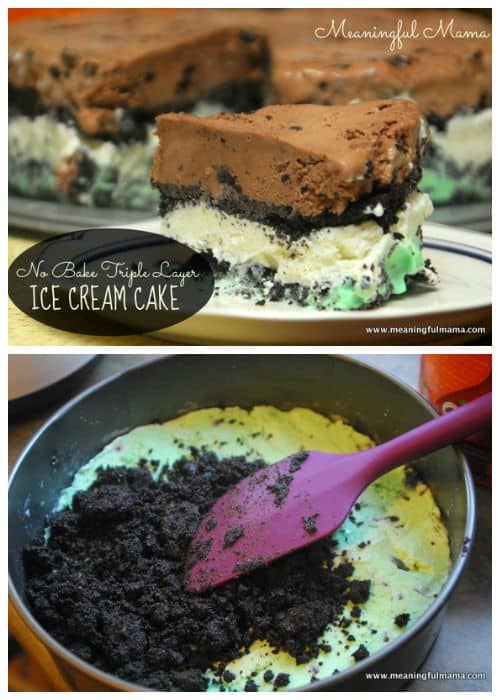 I insist on doing a variety of meals and desserts. He really does enjoy my other recipes, but nothing will take the place of ice cream in his heart. For his birthday this year I decided to resurrect my triple layer ice cream cake because I knew he would enjoy it. Sure enough, it was a hit. It’s so easy too. It is basically 3 types of ice cream with Oreo cookie crust in between each layer. You will just need to pick out your favorite ice cream flavors that would pair well together. I chose Mint Chocolate Chip, Natural Vanilla and Oreo Cookie Chocolate Ice Cream (which was a new discovery for me). 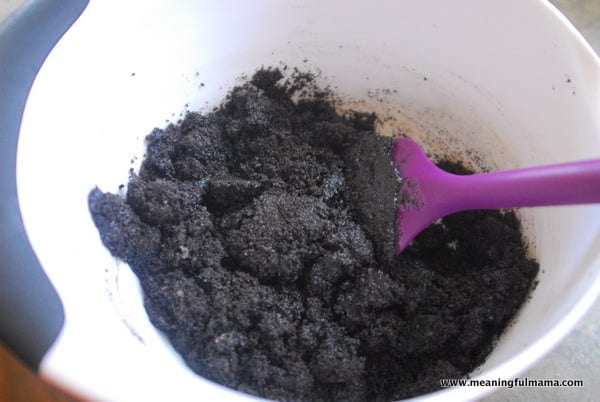 The first thing I did was mix up an Oreo Cookie crust.

I use a food processor to ground my Oreo cookies to a fine texture. However, you can put them in a Ziplock bag and pound them out with a meat mallet too.  Melt butter in the microwave and stir into the Oreo crumbs until completely combined. 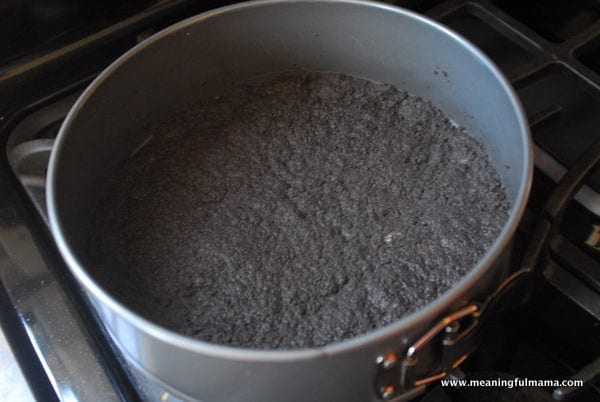 Lightly grease a springform pan. Press 1/3 of your Oreo crumb mixture into the bottom of the pan. 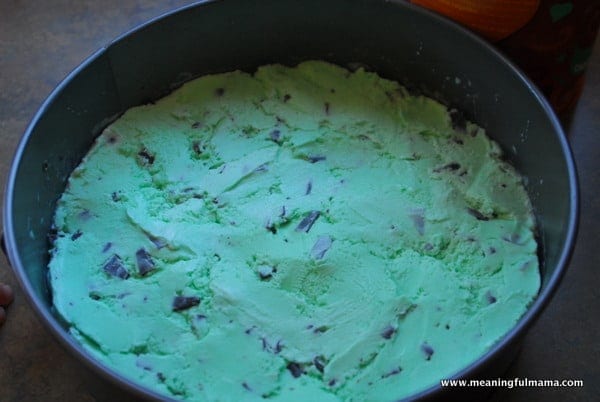 Spread out your first ice cream layer. I like to set the ice cream out until it just softens. It just makes the process of spreading easier. I wish I had more carefully planned out the ice cream layers. This bottom layer was too thin, so I wish I had weighed the amount of ice cream to insure equal amounts. Apparently, my visual estimation wasn’t accurate. Maybe you are more skilled in that arena, but I would just set it on a kitchen scale so the layers look more even. 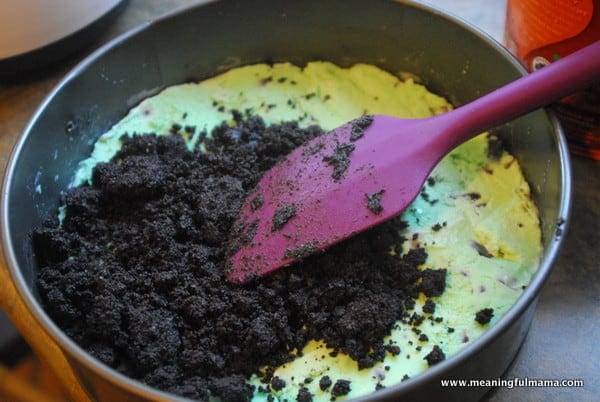 Spread the next Oreo crumb layer. This will  be half of the remaining (each Oreo layer is 1/3 of the original recipe) crust. 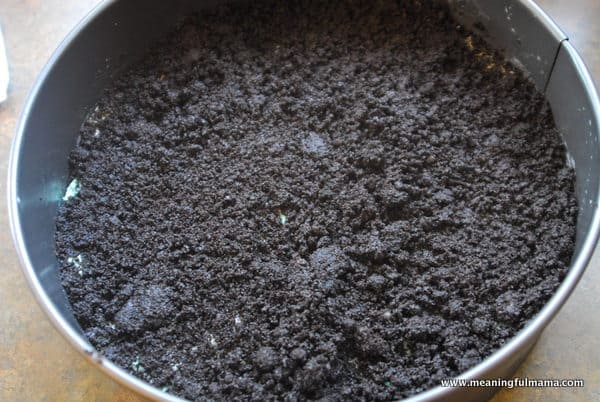 After spreading out that layer of Oreo crust, I put the springform pan and its contents in the freezer for about 10 minutes to let it set while I take out the container for the next layer of ice cream to let that soften. 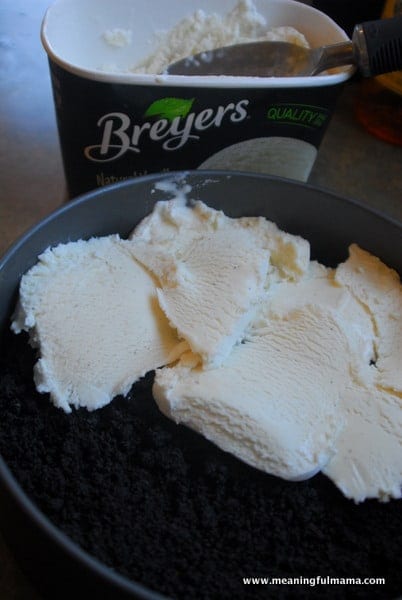 Spread out the next layer. I always find it nice to have a vanilla in your three flavors because it is a more neutral flavor that can tie the other two flavors together. 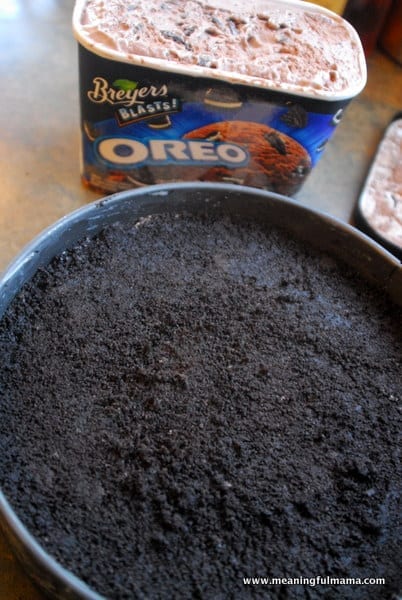 Add the final layer of Oreo crust. Put it in the freezer to set while you pull out the final ice cream flavor to soften. 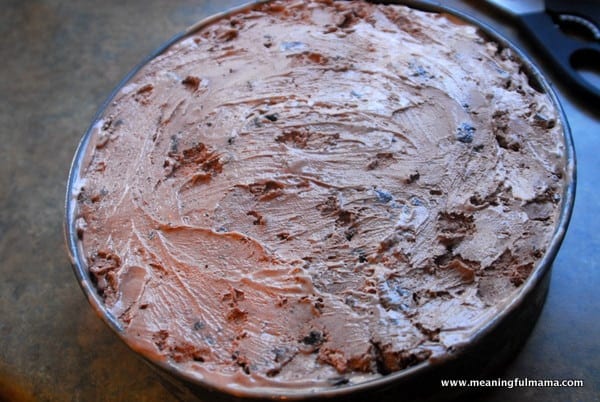 Spread your final layer of ice cream. I cover the whole pan with a foil until I am ready to serve. 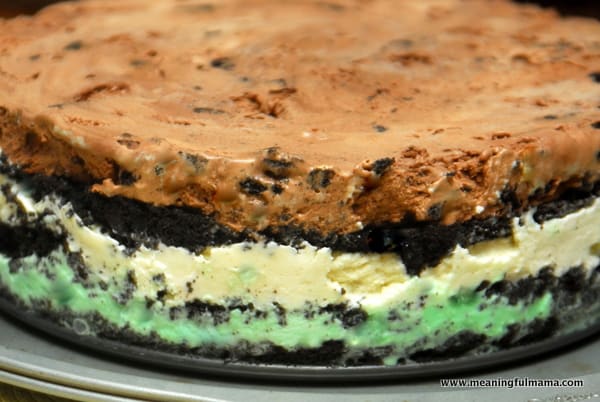 There you have your very own triple layer ice cream cake. Easy and absolute grub. Your ice cream lover is going to be in heaven. It is definitely a crowd pleaser. Run your knife under hot water to cut. You don’t want to leave this cake out. It will melt too much.

Previous Post: « I Once Was a Super Mom
Next Post: Mom’s Library and ABC’s of Australian Yoga Book »
Subscribe
Login
3 Comments
Oldest
Newest Most Voted
Inline Feedbacks
View all comments