You are here: Home / Kids / Character Building / Day #152 Flexibility in Circumstance – Character Development, Week #22
Flexibility
Set your mind on things above, not on earthly things.” – Colossians 3:2 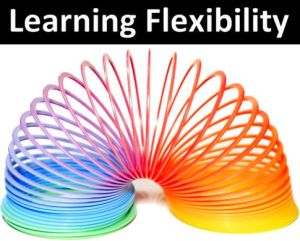 I had considered manufacturing a situation where the kids had to be flexible. I felt bad though because it would probably involve coming up with something they wanted to do and then disappointing them. Well, it turns out that I didn’t need to come up with my own solution at all. The chance to be flexible showed up, and I was really impressed with the girls’ response. The kids always want to know the plan. They woke up and asked. I said, “We’re going to Costco.” They got dressed to go. Then, a friend contacted me to ask if we wanted to go to the park. I’m always up for a play date, so I decided to postpone Costco until the afternoon and join her and her kiddos. I announced to my kids the change of plans, and they were excited and put on an outfit better suited for the park. About 20 minutes before I was about to get there, my friend called and said, “Are you almost here because we have to leave in about 30 minutes. I messed up. The time she had said for leaving the park was the time I thought she said for meeting. Oops. The park she was at was 20 minutes away so now it didn’t make sense. I told my kids there was another change of plans. I had a few other errands I wanted to run. Could they be flexible and we could do the park another time? Not one complaint. Because they had done so well, I skipped a couple of the errands, bought us lunch and we went to a different park. Sometimes life just aids in the lessons you are trying to teach.