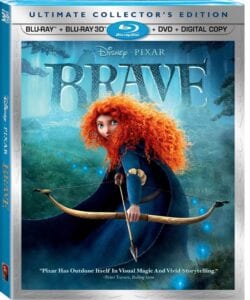 It’s my first ever giveaway here at Meaningful Mama. I’ve been so busy blogging that I haven’t slowed down to pursue many giveaways. Luckily for you, that changes with the release of Disney Pixar’s Brave. I’m excited to both review and offer 5 Disc Set for one of my lucky readers.
Can watching movies be meaningful and intentional parenting? Sure it can. We have a Friday tradition of pizza and movie night. Put away your cell phones. Curl a kid up in your lap. Engage with them about the movie. You’re being present.

Now I want to tell you a brief synopsis and my own review of this movie. I was sent the film to review, but all of the opinions are my own. The story takes place in Scotland with our young heroine, Merida. As her vibrant, red hair suggests, she is a spirited young princess. She would much rather be developing her skills with a bow and arrow than wearing dresses and learning the proper etiquette of a princess. I can appreciate that in a woman. Due to tradition, she is suppose to marry one of three young suiters who need to compete for her hand. True to her stubborn nature, she defies the whole process and rebels against her parents and the systems in place. Doesn’t seem like that attitude is much of what I’m supporting here at Meaningful Mama, does it? Well, if we stopped right there it wouldn’t be much of a movie, and I wouldn’t be excited about this film. However, this is not the end of the story. The story starts with rebellion which is when everything starts to go south. This story then leads to repentance, forgiveness and reconciliation. A good things parents can take away while watching Merida’s mother in this film is to really engage your kids and listen to them rather than just pushing your own agenda all the time. The better you can hear and truly listen to their hearts through a solid relationship, the less likely this sort of rebellion will occur. On a side note, the jovial, laid-back dad I can relate to in my own family, so I appreciate his humor throughout the storyline. The 3 little brothers add some comedy elements as well.

Beyond the story, the cinematography is fabulous. My husband said to me, “That’s the most realistic water I’ve seen in animation.” It’s almost like your caught in between animation and real  life with the quality of the production. It is a visual masterpiece that draws you in as you are taken to the forests and lands of Scotland. I loved seeing Merida’s red, curly locks bounce around throughout the movie. I have the 5 disc set, which includes a Blu-ray 3D version. I am excited about watching the 3D version because the movie already seemed to pop out of the screen. I imagine it being even more dynamic in 3D.

Lucky you! You have an opportunity to win what has been deemed the best animation movie of 2012.  I’ve added the Amazon link so you can see what you will receive. The product is the BRAVE Ultimate Collector’s Edition 5-Disc Set, which includes Blu-Ray, Blu-Ray 3D, Digital Copy and DVD. For more details, I’ve also included a link to the press release for the film. Good luck! This is my first time using Rafflecopter, and I hope I did it all right. If you have any problems, please let me know ASAP so I can rectify it.

I am so excited for this giveaway!! I loved this movie! Thanks for the chance 🙂

i am new follower 🙂

What an awesome giveaway! Good luck to us all!

I would love to win for my daughters to enjoy!

What a great giveaway! Thanks for the chance to win such a wonderful movie set! I’ve been following your blog for over a year now and have started some character development teaching with my 3 little ones- thanks for sharing all of your great ideas with us (=

Thanks for a great giveaway!!

Thanks for the great giveaway! I know my family would love this movie and I appreciate the chance to win!

I love your blog! And I’m excited about the giveaway! We haven’t seen that movie yet so I hope we win!

Would love to win this for my daughter!!!

I’m a new follower via GFC. Thanks for a great giveaway!

Thanks for the giveaway!

I am a new follower on GFC!

Would love to win this! Our family loves to have movie night and we love movies where there is an opportunity to discuss God’s values. 🙂

Thanks for the giveaway! Haven’t seen it yet but look forward to !