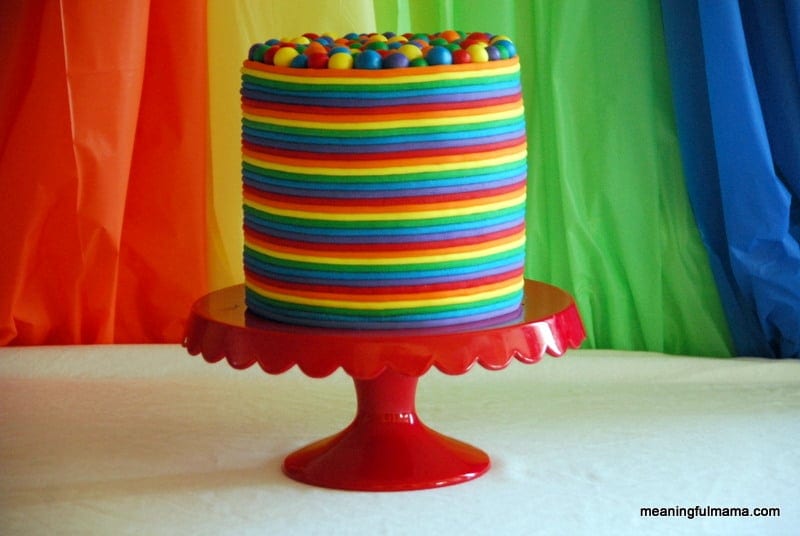 Part of throwing a party in our house is making a cake.  It’s a hobby of mine, and the girls really enjoy it too.  I had a design in my head and decided to look online to see if anyone had done anything similar.  It was basically going to be a bunch of rainbow tessellations going up the cake.  However, I saw this design on the Party Wagon and just had to do it. Make sure you also check out the final results of our Rainbow Party. 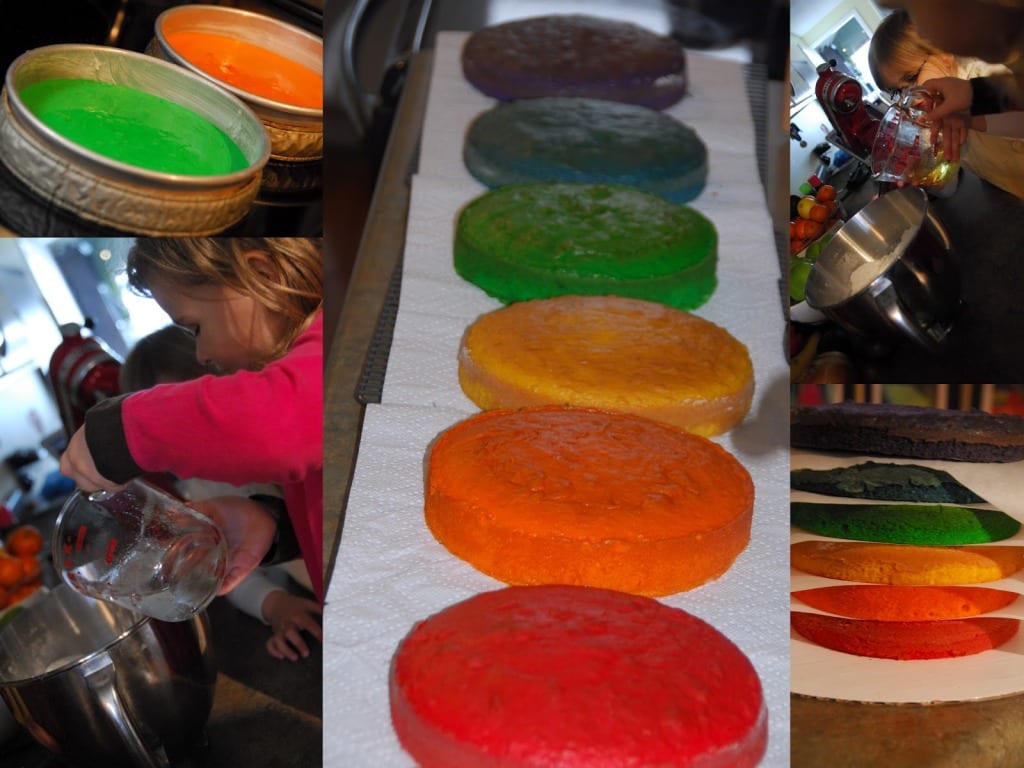 The first step of course is baking.  The kids love to help with this party.  Please see our favorite white cake “White Velvet Cake” and my “Cake Making 101” tutorial.  I simply added food coloring to a white cake batter. 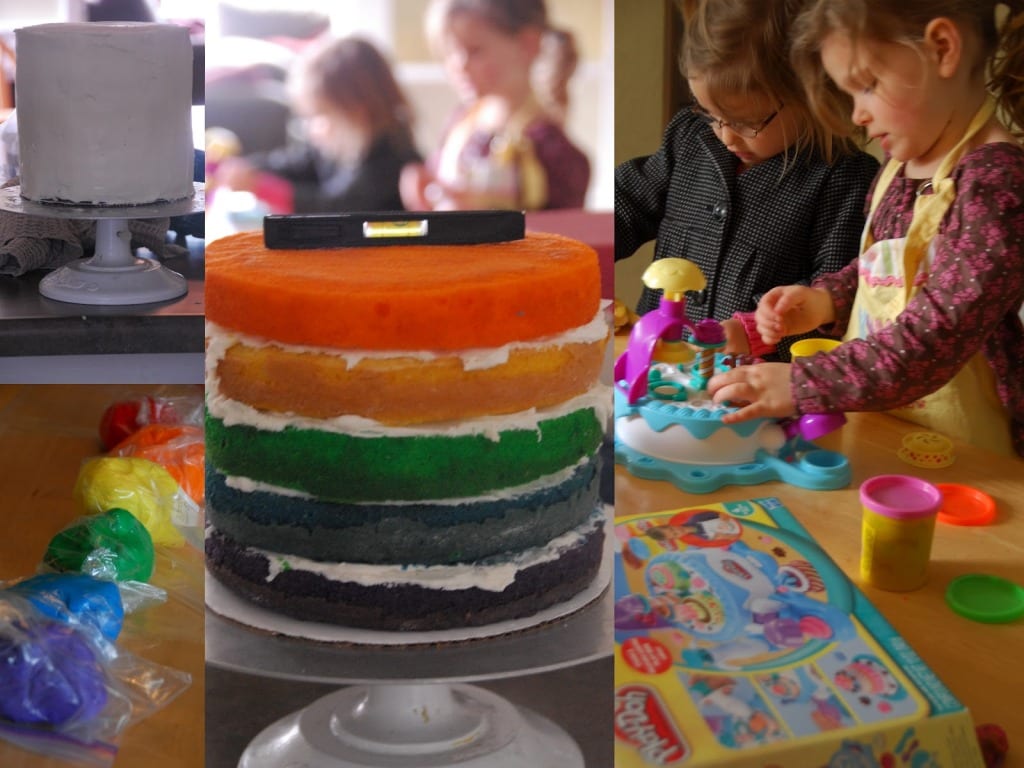 The next step is to frost.  You can see my level on top. I like to use a lever anyway, but I found it really helpful with such a tall cake.  While I was frosting, the girls had their own cake making Play-Doh set out.  I also had to color all of my fondant the rainbow colors. 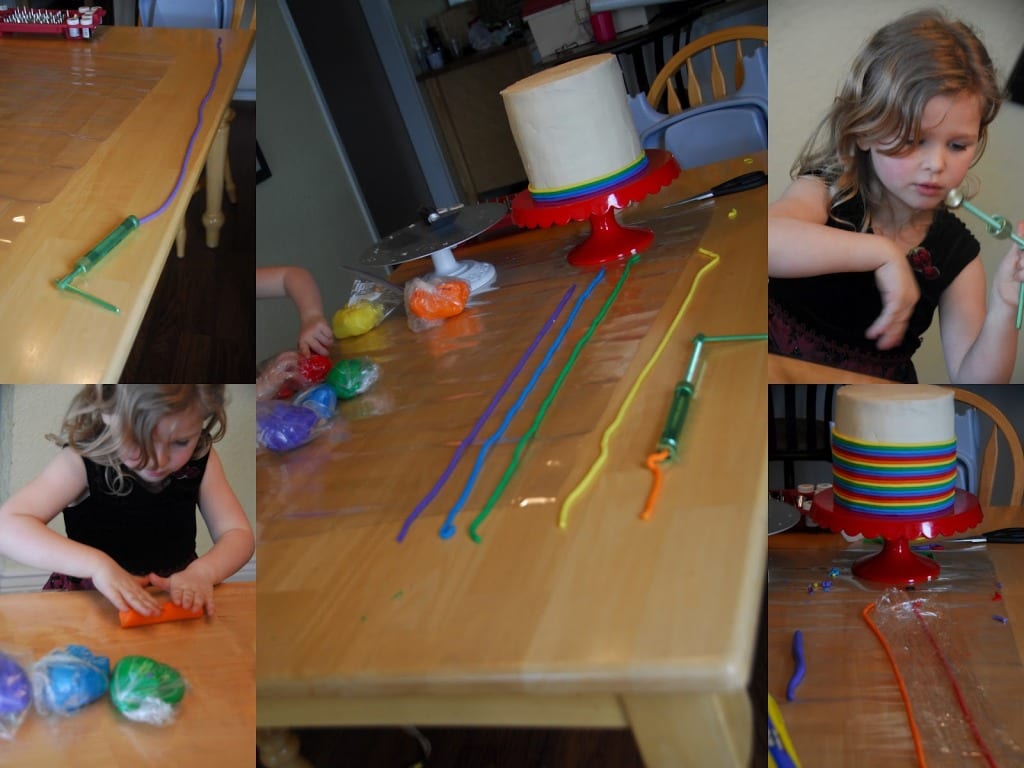 The final step was to decorate.  The big trick here was a Christmas gift from my wonderful husband…the clay extruder.  It is actually a tool used for clay, but it really works great for fondant.  It made this job fairly easy. It has a bunch of different discs that slip on the end so you can extrude different shapes. Great tool! I also need to say that I wanted to decorate during nap time.  Abby really doesn’t nap much anymore, but sometimes she falls asleep during her quiet time.  I was pretty disappointed when she came waltzing into the room.  However, I invited her to join in, and she actually probably ended up cutting my job in half.  She would roll out the fondant to fit into the extruder.  She’d also help clean out the extruder after every color.  It was really helpful, and I ended up being absolutely thrilled that she was there to help me.  The design is fairly simple if you have this tool.  Just extrude the snakes and layer onto the cake.  Roll out fondant balls to put on top…or you can throw a bunch of gumballs on top for a bit of whimsy. 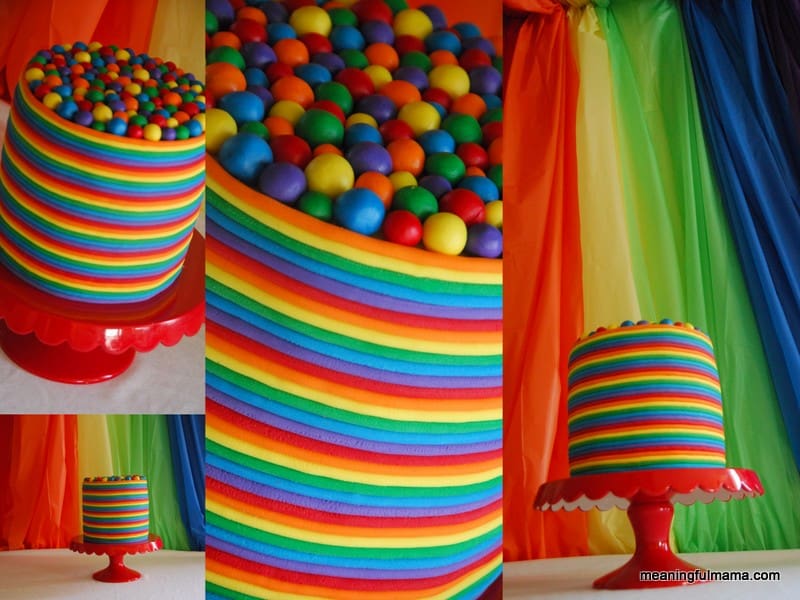 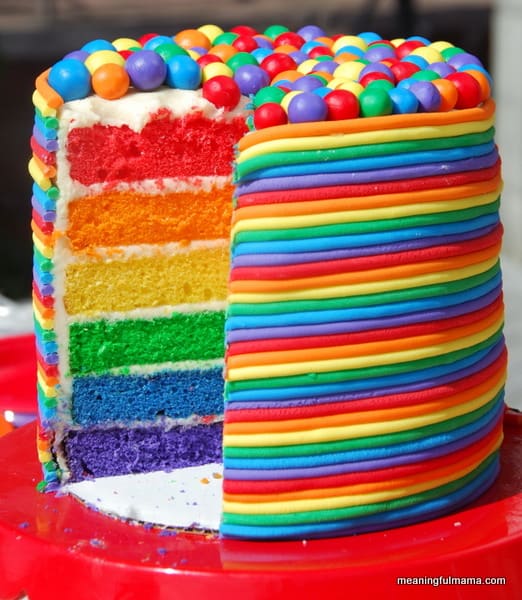 I love Duff Fondant. It tastes better than most, with a similar flavor profile of a Lucky Charms Marshmallow. I like how it behaves while you work with it, and I like that it comes in a variety of colors. Here are some helpful links:

With the popularity of the rainbow loom, I also wanted to bring you a Rainbow Loom Cake idea done by Local Fun for Kids.
I was featured:

Absolutely gorgeous!! Homemade birthday cakes are a tradition in our house too! Love is in the details…..:)

Thanks so much. A big compliment coming from someone with your artistic food skills.

0
Reply
kassie
Reply to  lizy b

THAT IS SO GORGEOUS AND BEAUTIFUL!!!
YOU ARE SUCH A PRO

Thank you. I’m glad you enjoy this cake.

This is absolutely amazing!!! Great job!

Thanks you so much, Erin.

Absolutely amazing and beautiful! You are one talented gal!!!

Thanks, Trina. It’s such a fun hobby. Definitely something I love.

Wow! This is totally amazing! How cute is this cake?? Makes me wish I had girls to throw a rainbow party for…but alas, I have boys. Love this!

Thanks for your thoughtful comments. I think it will make fun to do the boy cakes too. 🙂

how much fondant did you use for the outside? I just bought 2 boxes of ready made colored Wilton pkts. Will that be enough?
Love this idea!!! willowgal2u@yahoo.com

Yes how much fondant was used? and how long is each strand?

Thanks for commenting, Emily.

Wow!!! This cake is so Awesome! And the clay extruder…genius! The first thing I thought when I saw your link was, “how did she get all those little fondant rolls the same size?”
Now I know!

Yea – the extruder was my saving grace. One fill made to strings to go around the cake. It was one of the faster cakes I’ve done…especially with my daughter’s help. Thanks for commenting.

Wow, that is gorgeous! I love all of the details. I found you through Craft-O-Maniac. Thanks for sharing!

Thanks for commenting, Becca. I’m grateful you took time to come over and check it out.

This is incredible! Your one talented lady!
We have our first ever Beautify It Monday link party going on now and we’d love for you to stop by and link up @ bringingbeauty.blogspot.com

Oh man! I was way too busy this week. I’d love to join you next week though. Thanks for the invite.

This is AWESOME!! I love this! I’ve been searching for the perfect kind of cake to make for my sister’s birthday. This is the winner! Thank you!

Oh so cool. I’d love to see the results. will you let me know when it is posted?

0
Reply
A To Zebra Celebrations

My mouth drops!! incredible!! thank you for linking 🙂

0
Reply
Mama Jodi
Reply to  A To Zebra Celebrations

I take that as a huge compliment from someone as talented as you. Thanks!

Fabulous cake!
It’s a real beauty
I’ve seen many rainbow-cakes, but never as beautiful as yours

Thanks so much, Winnie. I take that as a huge compliment.

Thanks for the kind words and invites. It was a crazy week trying to get out of town. I’ve saved your button and will be linking up tomorrow if there’s a party going on. Thanks so much for letting me know about it.

This is A-ma-ZING…I just showed my little girls. We’re all in awe!
I would love for you to come share this at my linky party, Cowgirl Up! going on right now!
♥Linsey

Hopefully I have more time this Monday to make that happen. Thank you for the invite and kind words.

WOW! I wish I could make something this amazing:) You did an excellent job with this! I’m so pinning this. Thanks for sharing.
Mindy @ The Blooming Daisy
thebloomingdaisy.blogspot.com

Thank you so much for taking the time to look and comment. I appreciate it.

You did an absolutely great job with that cake! How do the cake wraps work, do you find they make a big difference in baking?

You might want to submit your recipe here (http://theefirewife.blogspot.com/2012/03/cake-week-2012-rules-regulations.html) for Cake Week 2012! There’s going to be lots of sweet prizes!

Have a great day (and if you ever want to make me a birthday cake, just give me a holler!)

Found you through WFMW

Thanks so much for commenting. I do like the cake wraps. I don’t get as much of that dome shape when I use them. It cools the outside so the cake bakes more evenly. Highly recommended. I linked up a couple recipes. Now I wish I just had more of my cakes up on my site.

WOWWWWWW!!! That is a beautiful cake! You have an amazing gift– great job! Looks wonderful!

Thanks so much. It’s such an amazingly fun hobby for me. One of those things that makes me forget about lunch while I’m working…that never happens.

Thanks for linking up to Thinky Linky Thursday!
Lori @ Cachey Mama’s Classroom

Jodi, you’ve totally outdone yourself. This is so incredible! I’ve featured you at today’s Mop It Up Mondays! Have a wonderful week!

Thank you so much for the feature, Kristi. Makes me smile.

Will you PLEASE post this wonderful cake on my first linky party, Dare to Share. I LOVE it!!

Hey. Thank you so much for letting me know about it. I’ve been on vacation, and we’ve been away from the computer most of the time. I’m writing from my phone now. I’ll try to link up when I return.