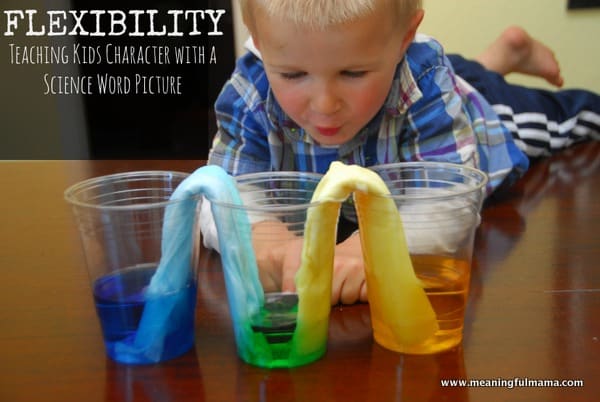 Set your mind on things above, not on earthly things.” – Colossians 3:2
Flexibility is our character development word of the week. I love to teach character with visual or word analogies. Today I chose a fun science experiment about absorbency to help in teaching more about flexibility. The main concept I discussed with my kids throughout the science experiment is that the water was not stagnant. It was moving, changing and adapting. Sometimes being flexible is kind of like being a chameleon. You become more flexible to go with the flow. I tried to give some examples of when it is good to be flexible. One example I said was explaining what would have to happen if we had something fun planned as a family but someone else called us and might really need our help. We would have to change and adapt our plans, letting go of our own desires, to be willing to do something for someone else. I talked a little bit about how it is important to remain flexible and maintain a good attitude with change in a lot of circumstances. However, I want them also to know that we don’t want to become a chameleon when it comes to try and fit in with society. We don’t want to be willing to change and be flexible when we know that contradicts what we know to be right. A good example for kids might be in school there are a few kids that decide to break the rules at recess. They want you to join them. If you did, you might be being flexible, but it is not the right kind of flexibility because you know you are changing and going against what is the right thing to do. I talked about all these things as they watched the water absorb into the towel – obviously moving and changing. It took a bit of time, to see the blue and yellow colors finally come together to make green. It was a great visual to show something changing or adapting. I saw this original science experiment at All for Kids. 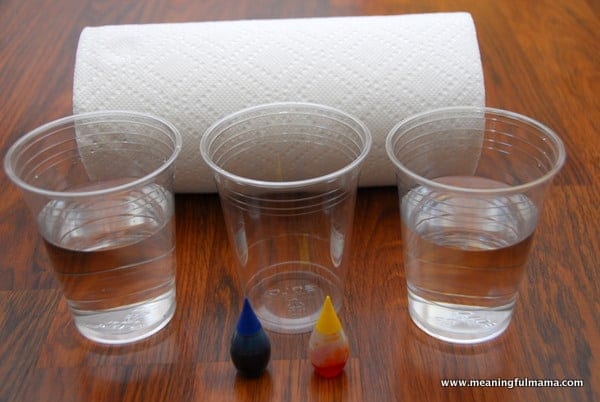 All you nee for this experience is 3 clear plastic cups, water, food coloring and paper towel. 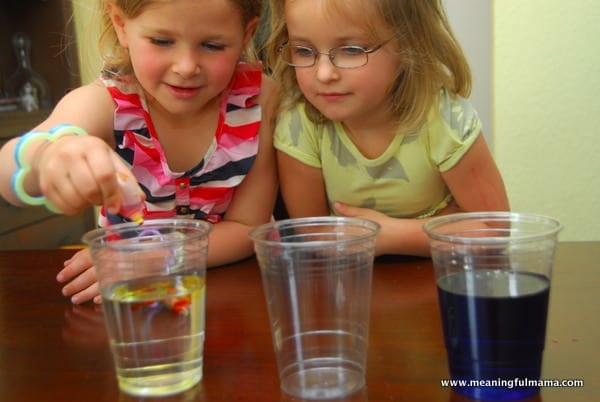 I let Kenzie put in the blue coloring while Abigail put in the yellow. 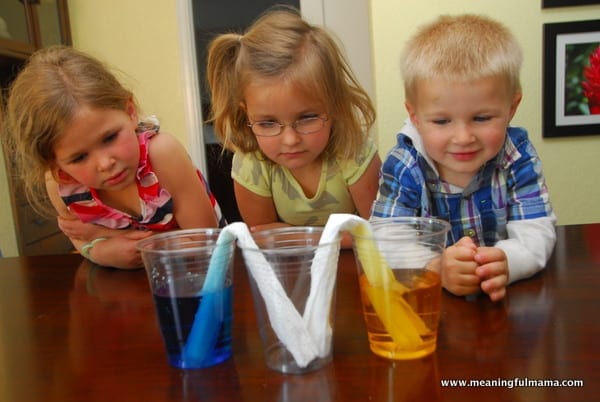 We began to watch changes happening. Abigail was the first one to spot the water moving up paper towel. I explained to them that that is called “absorbency.” Abigail guessed that the water would go up, weakening the paper towel and would cause it to break in half. I told her that she just made a “hypothesis,” which is a good guess based on what she knows. I asked her if she had any other hypothesis. She did end up coming up with the idea that the two colors might meet to make another color. We kept watching for a bit, and they wanted to stay. I finally convinced them to go play for a while and come back. When I saw the waters coming together to make green, I called them back to observe the changes.
print
Share
Pin109
Tweet
Email
Print

Love kids expressions when they are watching. Thanks for sharing at Mom’s Library. Featuring it on iGameMom http://igamemom.com/2013/06/12/summer-science-activities-moms-library/

Thanks so much for featuring this idea. I am glad you enjoyed it.

I love your weekly character development! I homeschool my 5, 4 and 2 Year old and I’m going to be adding this to their morning routine!

That makes me so happy! It’s the heart of my blog, and it has been a passion in both doing and creating. Thanks so much for letting me know. I’d love updates every once in a while to hear how it’s going. Blessings!

So cool!!! I want to do a whole rainbow – a big long piece of paper towel that goes from red – yellow-blue with empty cups between them all…

That would be super cool. Now I want to go back and do that too! Have fun with it!

This is a very meaningful experience on many levels. I hope I can represent it as well as you do.

Thanks so much. I’m sure you’ll do a great job!