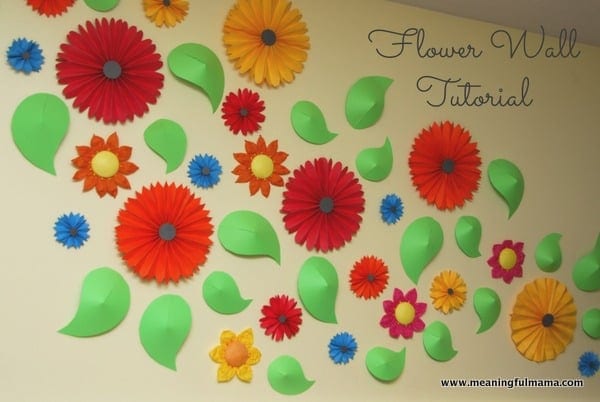 There are so many bright, fun options when decorating for a spring party. I fell in love with the concept of doing a flower wall. I originally saw this idea on Pinterest, and it was found at Snow and Graham. Of course, I did my own handmade (mostly) version. Like most everything else on my blog, I don’t want to just show you what I’ve done. I want to give you the tools to re-create it. I want to give you tutorials. These pinwheel paper flowers were made by hand. The ones that don’t look like pinwheels were pre-made and found in the Dollar bins at Michael’s Craft Store. I’ve made pinwheels before for my “Shabby Chic” baby shower and “Back in the Olden Days” going away party. However, I never gave you a tutorial, so this is my chance. Now, I did another “pinwheel” tutorial, but that’s a completely different kind of pinwheel. These are called pinwheels, right? Is anyone aware of another name? 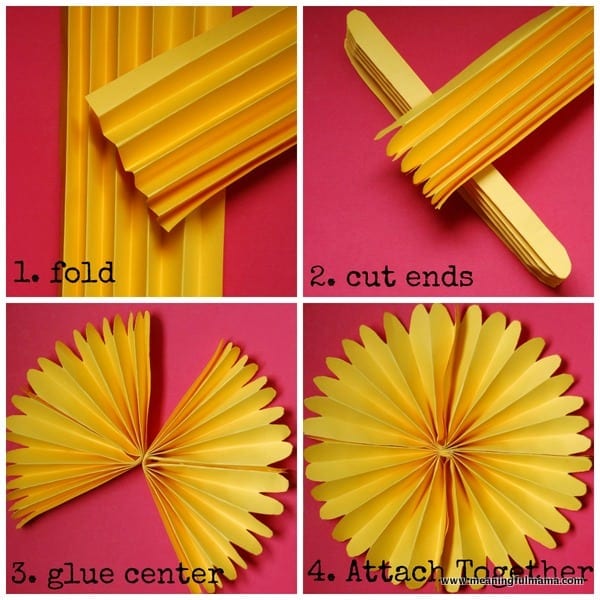 Pinwheels are very easy to make.

1. First, you take a piece of square paper. I used scrapbook size paper for the big ones. You fold this paper along back and forth like an accordion. Two pieces of accordion folded paper make up one pinwheel. I’m not very type A when it comes to my folds, and it always works out just fine. Martha Stewart, I believe, sells some sort of device to fold these perfectly. I think it is completely unnecessary.

2. The second step is to cut the ends to your desired shape. You can see that I rounded these ones off at the two tips. However, with others I kept them straight and others I cut a V point on the end.

3. The next step is to fold your accordion paper in half at the center. You will glue the place they meet with a hot glue gun or use double sided tape. The picture above shows two pieces of paper where the center has been glued together.

4. The final step in making the complete circle is to hot glue or use double stick tape to stick the two halves of the pinwheel together. You see the gaps in step 3 above? The adhesive goes on one of those sides and you stretch them until they meet. 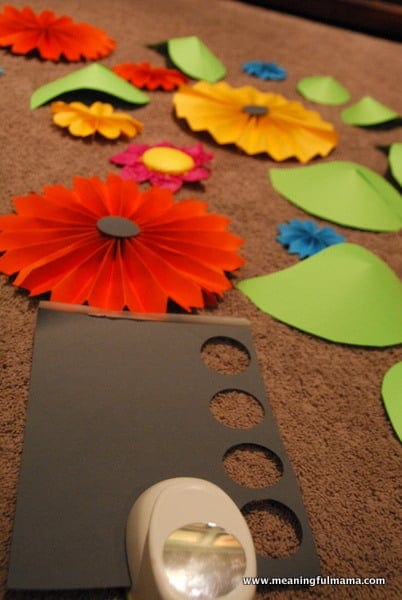 I used a circle punch for the center and adhered it with hot glue. You can cut them out by hand. In the past, I have also used buttons or circles covered in twine (as seen at the above referenced parties above). There are all kinds of options for the center, and I bet you have your own great ideas. 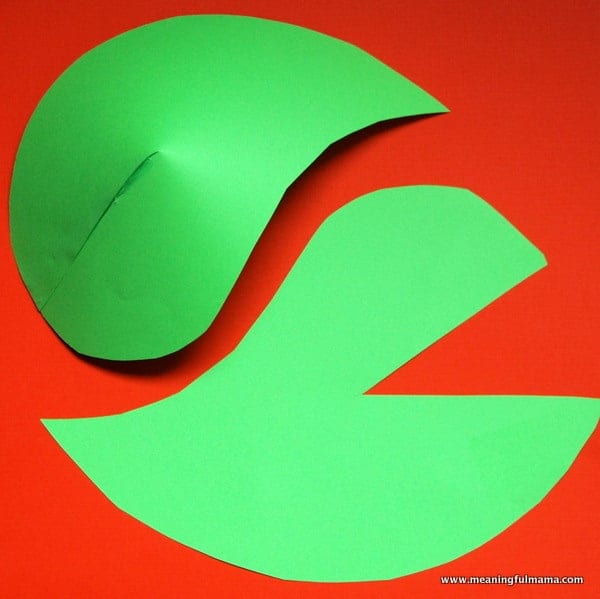 The leaves are easy to make too. I just hand drew the shape of a leaf and cut a pie wedge triangle shape off the bottom. I brought the two ends sides of the triangle together and used hot glue to keep them together. This creates the 3D look of the leaves. I used this same process when I made the leaves on Kenzie’s birthday cake and fingerprint flower invitations. 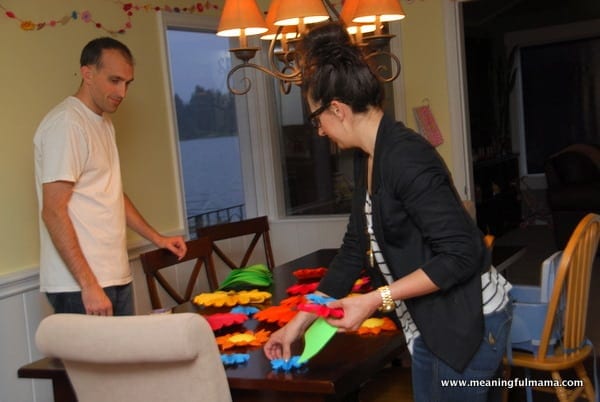 I had my team of decorators (husband and sister-in-law) lay it all out and help hang it up the night before. We just taped it to the wall. 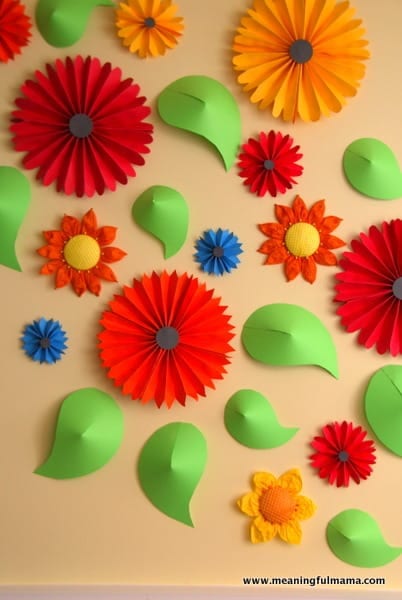 I kept it up for a few days because I kinda fell in love with it and didn’t want to take it down. I would have probably kept it up for longer except that the tape started to lose it stick and the pieces kept falling down. It took a couple of days before that began to happen though.

Well done! And what a sweet idea! 🙂

Thanks so much, Lindsay.

Just wanted to stop by your blog and welcome you to Collective Bias. Loved finding this tutorial. You make it seem easy. Off to pin it now!

Thank you so much, Wendy. I need to really sit down and figure out Collective Bias better. Thanks so much for stopping by to welcome me. It’s going to be fun to make connections with you!

Love your wall decorations, perfect for spring! My favorite part is the unconventional leaves, which add more texture to the composition 🙂

Thank you so much! It was a lot of fun to do. I appreciate you commenting and stopping by here!

I love love this!! i HOPE YOU STOP BY TO LINK- http://atozebracelebrations.com/2013/04/link-party-14.html
Nancy

I got so busy yesterday. I just linked up my spring party! Thanks for stopping by!

Jodi, I love this! It looks awesome; I wouldn’t want to take it down after the party! 🙂 Have a great weekend!
Mackenzie 🙂

Thanks! I did keep the garland and hung it in the girls room. I loved the wall too, but the tape started to lose its stick after a couple days. It’s the only reason it was removed. 🙂