Home » Recipes » Appetizers » How to Keep Guacamole from Turning Brown 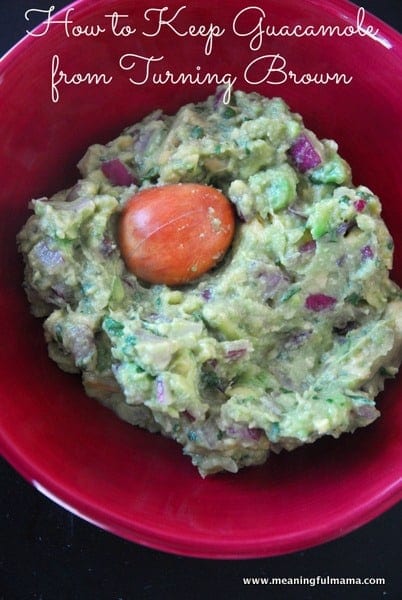 I am excited to tell you how to keep guacamole from turning brown. Do you know this trick? Maybe I am behind the curve ball on this one. I just found this out through my sister-in-law. I figured that if I am learning this for the first time and have never seen it before, there must be a lot of people out there that don’t know this trick.You have to see it work to believe it. The picture above is taken of guacamole that is one day old. The secret is simple. All you do, after making your guacamole is keep the pit in your guacamole. Now if you need a fabulous recipe, I have a guacamole recipe that will transport you to Mexico. Now that you have the recipe, you can keep it fresh with a couple simple tips I’m giving you today. Of course, the acid in the lime helps fight off the oxidation process, but it has never been enough for me. The one other thing I know that is important when storing is to put plastic wrap right on the surface of the guacamole before closing your storage container lid. This minimizes the exposure to air, which slows down oxidation. The difference the pit made was exceptional for me. Generally, my guacamole starts turning brown at the party. However, I had no browning at all during the party even though it was open to the air. The combination of keeping the pit in and covering on the surface with plastic wrap at the end of the day kept it perfect for the next day. Make sure to refrigerate! So, why does this happen? I did a bit of research. I assumed it worked because there was some sort of chemical being released from the pit that prevents the browning. However, it turns out it is not quite that complicated. Apparently it slows down the oxidation process simply because it blocks more air from reaching the guacamole. You could just as easily set an egg in the middle of your guacamole for the same results. Crazy! With this recipe, I rarely have guacamole let over, but now when I do I can keep it fresh for the next day.

If you need a couple more recipes to try out with the guacamole, please check out these treats:

Taco Burgers – My taco burger has been picked up by Hop Jacks, and is suppose to be added to their menu soon. They did a trial run on their Happy Hour menu, and it was a success. So exciting. It might even be called “Mama J’s Taco Burger,” which is what I’m gunning for.

Chicken Fajitas – Guacamole always elevates fajitas to the next level. I love this recipe.