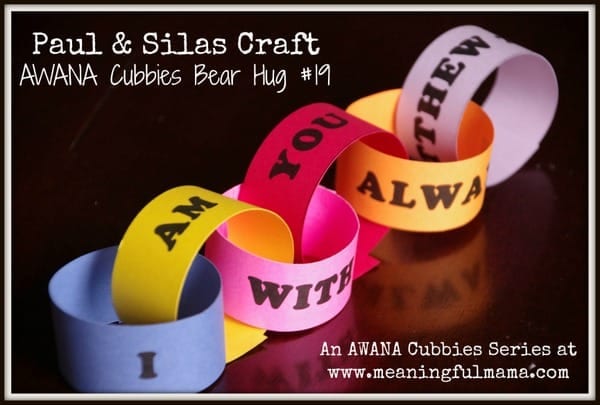 Welcome to my AWANA Cubbies series. As a short intro for those just checking in, I have been asked to design all of the crafts for the AWANA Cubbies meetings that happen at our church. AWANA is a program that teaches children the important truths in God’s Word. I have been adding to this series since the fall. We are on Bear Hug #19. Although this is meant to be a resource for Cubbies’ teachers, these lessons can easily be done in classrooms, Sunday School rooms or in your own home.

Bear Hug #19 in the Cubbies series is about Paul and Silas. If you aren’t familiar with Paul, he was a man who was out to persecute Christians. He was a very religious Jew and saw the message of Jesus as a threat to the Jewish God he knew. However, he then encountered the resurrected Christ first hand and his life was transformed. He began to understand that Jesus was the Messiah they had been waiting for and the fulfillment to his Jewish scriptures. Rather than persecuting Christians, he ended up in chains because of the message Jesus brought for the Jews and the rest of the world. Paul and Silas were missionaries telling other people about the gospel message. While in prison, they sang songs and praises to God. They remembered the key verse for today, “I am with you always…” Matthew 28:20, and it kept their hope alive. The story proceeds from there with an earthquake that sets them free and a jailer who panics in the situation. Rather than running, Paul and Silas stay, witness to the jailer and the jailer’s life is transformed in those prison cells and the walls beyond as his family is changed as well. I wanted to create a craft that brought this story to life both with the scripture and representing the story visually. 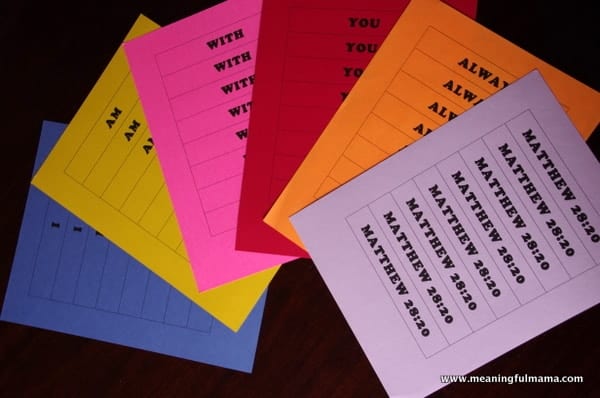 I made up a free printable for you to take away some of your work load. You will want to print these on six different colors of paper. I used card stock paper, but I am sure a lighter weight would work too. They just won’t be as sturdy. 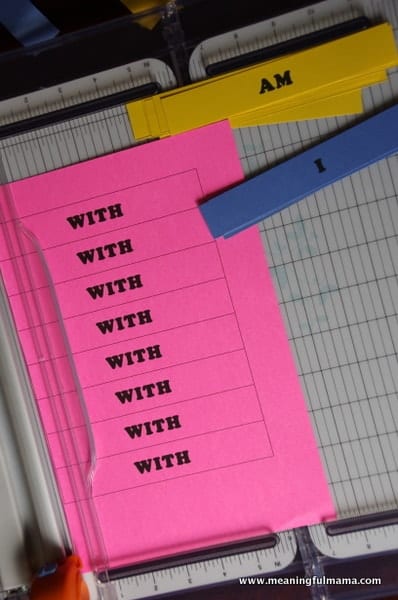 The next step is to cut out all of the strips. You will want to have these prepped prior to Cubbies. If you are a Cubbies or Sunday School teacher, you might want to see if you can find someone in your church willing to help prep the crafts for or with you. I bet someone within your circles would like this task. It can help reach across the generations to ask an older member of your church or a teenager. 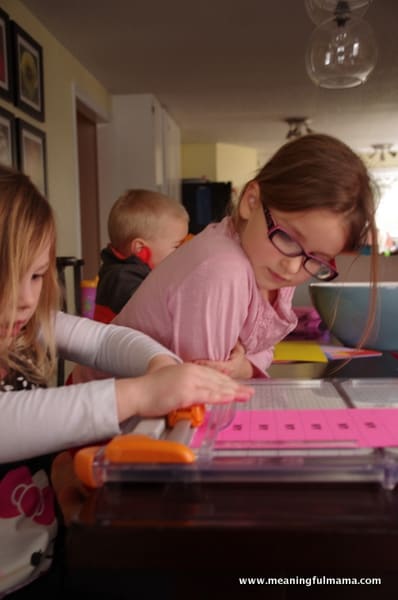 I had my little helpers that day. Yes, it took twice as along with their help, but I was there to teach them to use the cutter – often guiding their hands and adjusting paper. 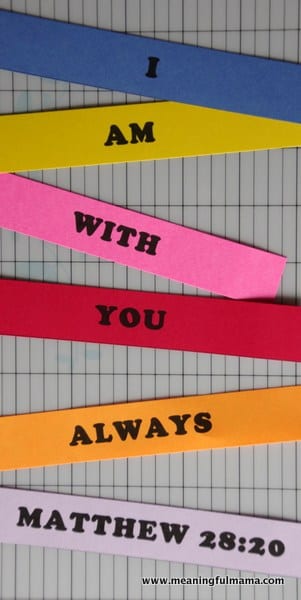 This chain is meant to be a scripture reminder – “I am with you always.” Matthew 28:20. Although Paul and Silas were imprisoned for their bold proclamation and teaching of Jesus, I know they were holding onto the truth that God was with them. This is what caused them to rejoice. 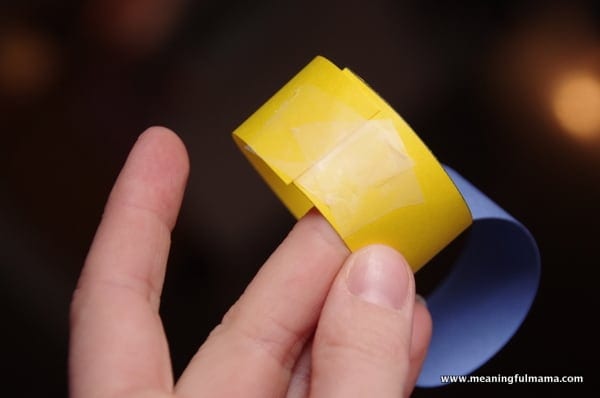 I used tape to hold it all together. Tape is easy for little kids. If you want to prep the room before they come in, you can add little strips of tape to the side of the table they can just grab and stick. 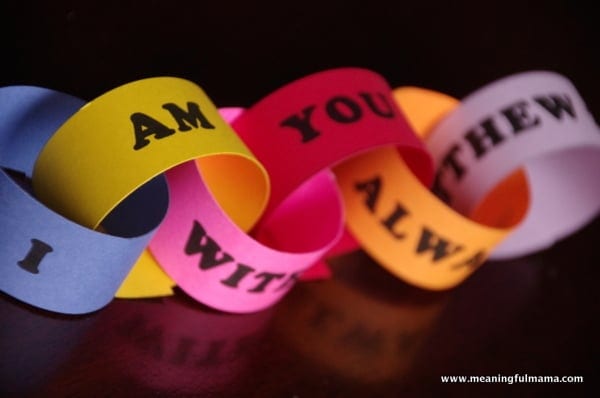 Each child will walk away with a paper chain to remind them of the story of Paul and Silas. Even though these men were in chains for preaching the gospel of Jesus, they continued to praise God because they knew that God was always with them. 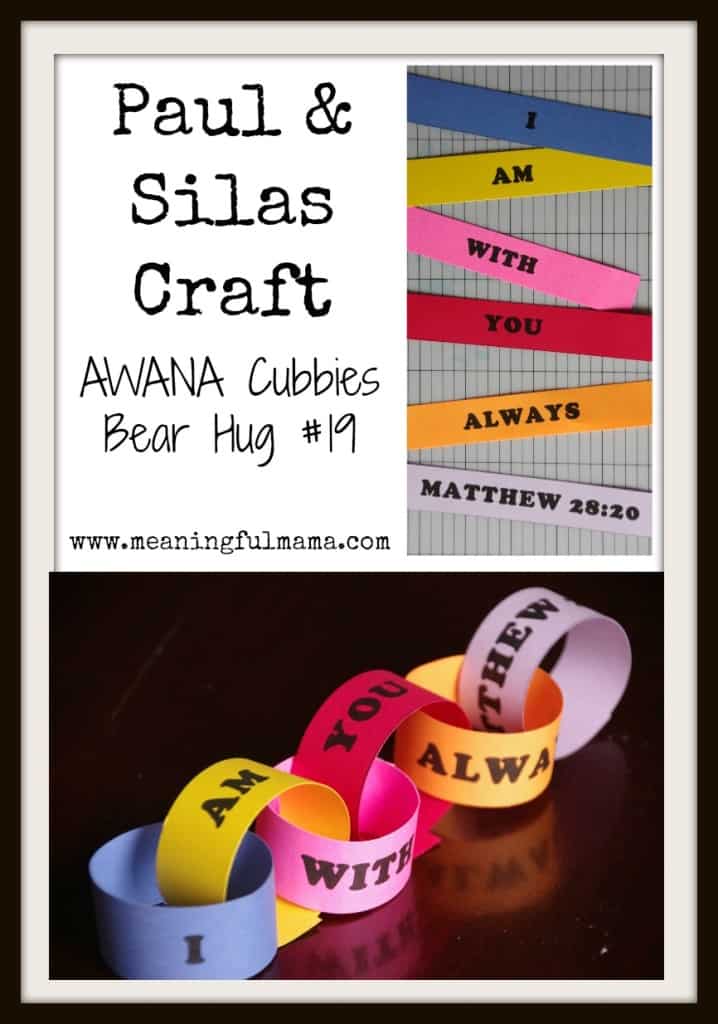 wot wonderful ideas and forthort youv put into simplifying bible knowledge for young ones. iv been inspired. can i ask what r the bear cuddlies series r as i only seen num 19 or is it the same principle around memorising scriptures. do you have a book with just activivites only in teaching bible concepts to young ones pls

Hello! I am glad you are asking about my Cubbies series. If you hover over my “crafts” tab, you will see the link to the entire series. I have done a lot of Bible lessons and activities throughout my blog too, so you can search for specifics in the “search this website” box located under the social media icons on the upper right hand side of my blog. You might be interested, also, in my character development series. If you hover over the character development tab, you will find all the 52 character traits we work on with 7-9 lessons with each trait – with verses, crafts, Bible stories, “I Will” statements and more. Thanks os much for asking and let me know if I can help you further.

I wrote a comment on June 3rd letting you know that trying to print out the memory verse on the paper chain will only print the word I. I paged up and down and tried each one and only the I word would print if you read the comment maybe you can email me some advice. Thank you Dee

I’m sorry. It’s been a busy week with the end of school year stuff. I have tried to fix it, but I don’t have ink right now to test it out. Will you go to the link and try again. Dropbox has been giving me some issues lately, so I’ve set it up a different way. Thanks for letting me know your issues, and I hope I was able to get it working for you.

All I get is the instructions. I thought the words for the verse were included.