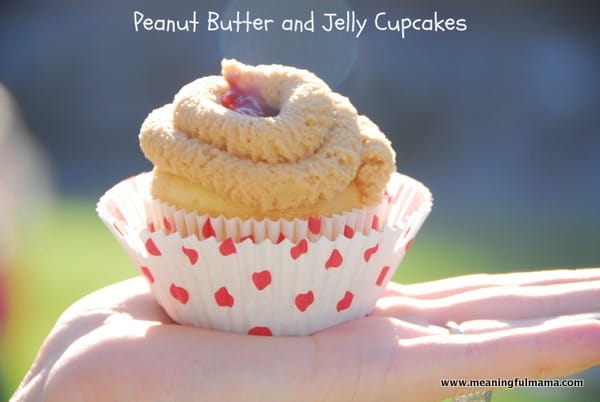 What goes better together than peanut butter and jelly? Doesn’t it make sense to turn it into a cupcake recipe? When I was serving at Malibu, I was working with a friend to cover all of the baking that needed to be done. While we were chatting food, she said, “I have an amazing peanut butter buttercream frosting recipe.” I’m always looking for a new recipe, and it sounded great. She said she loves to put this frosting on her brownies. That sounds really yummy too. I was headed to a friend’s house for a BBQ the other evening, and with an hour and a half to spare, I realized I hadn’t offered to bring anything. How rude. I texted and asked her if she wanted me to bring a dessert. She said I could if it wasn’t any trouble. I had been dreaming up these peanut butter and jelly cupcakes, so I said I’d make something and bring it along. This was the result. I left my kitchen an absolute disaster that evening, but I had something yummy to contribute to the festivities. I really enjoyed this cupcake and so did the others at the party. One person ate hers and then ate the peanut butter frosting off another she liked it so much. That was the warning when I was given the recipe for the frosting. As I was creating the recipe I realized there would be an easy version and a harder version. Neither is really hard, but you can decide on the level that fits your style. I love my white velvet cake, but I didn’t have any sour cream, so I just went with a plain old box cake for time and simplicity sake. I made the jelly filling mixture but hadn’t made enough (I have increased the amount below to make it appropriate for the recipe). Therefore, I did half of the cupcakes I took with the more involved jelly and the other half with just plain old jelly. They were both good. Of course, I preferred the slightly more involved one, but either would work just fine for you. Both require the same frosting. So, whether you want this recipe more simple or more homemade is up for your discretion. I don’t think you’d be disappointed either way. 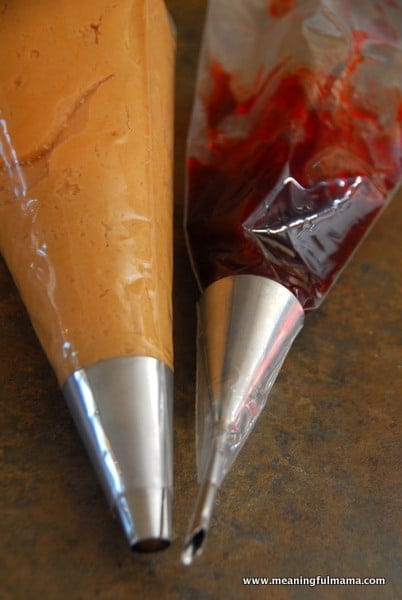 I had my peanut butter pastry bag and a jelly injector bag. You don’t need it so fancy. You could lather on the frosting and drizzle jelly on top. To get the jelly inside, you can use an injector tip like I have pictured here. However, I also found a tutorial on using a medicine dropper at Salt Tree. Brilliant. I’ve never seen that done before. If you have kids around, you probably have one of these. 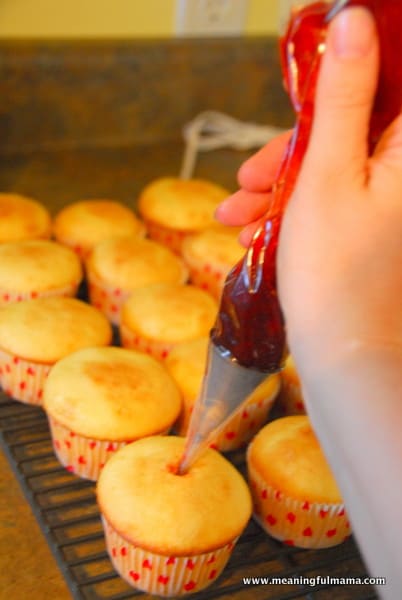 You inject the cupcakes with your jelly. I would estimate it’s about 1 Tbsp per cupcake, but I just squeeze until it bulges slightly and a little bit of jelly is poking out the hole, as picture below. 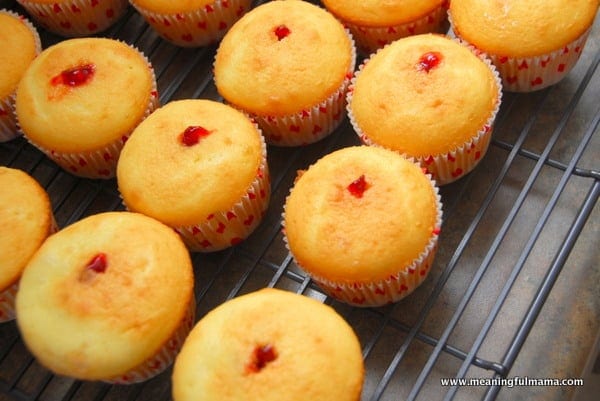 It kind of looks like they are bleeding. Luckily you don’t see the injection in the end. 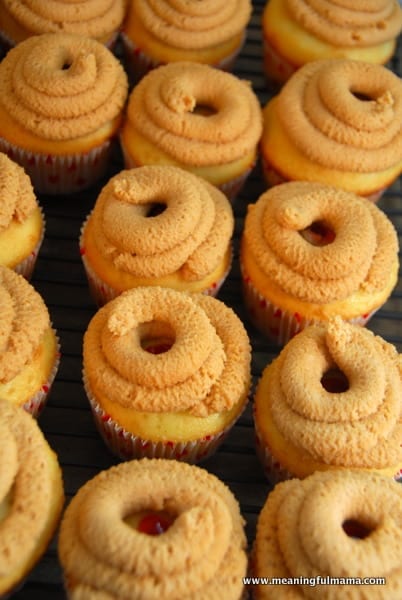 I used a simple round tip to do a spiral from the outside to the inside, leaving a slight hole to fill jelly in the top as well. 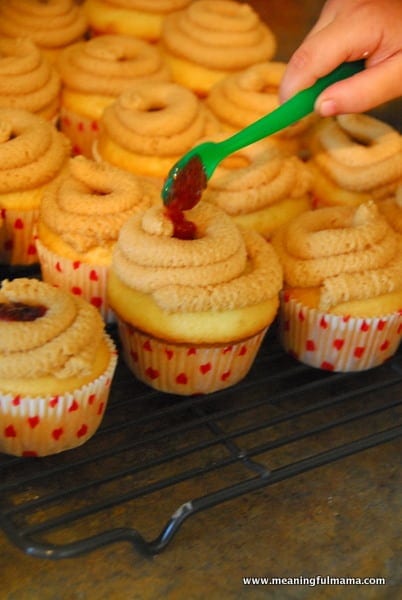 Kenzie wanted to use a spoon to spoon in some of the jelly, but you can also just use your injecting tool to fill a bit of jelly in the top. 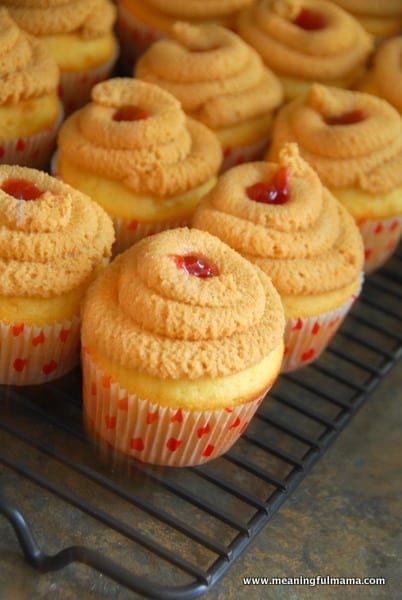 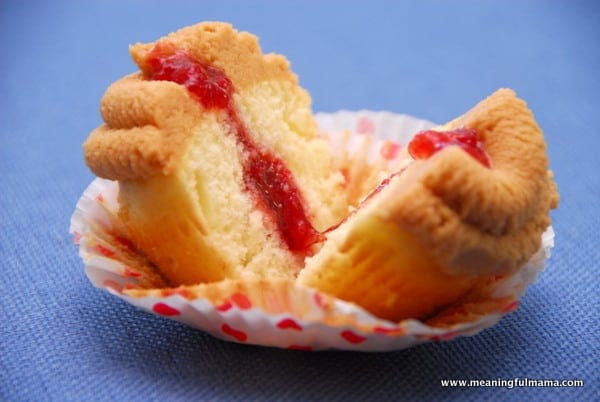 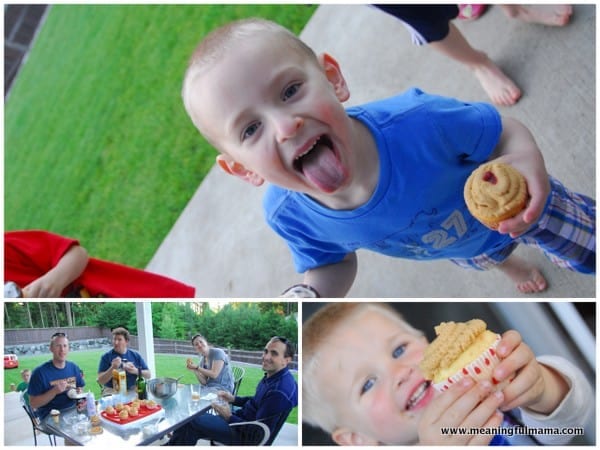 How fun are these!? My oldest loves PB&J right now and wants it ALL the time; I might have to surprise him with these soon! 🙂

Let me know if you do. Thanks for the feature today!