As a member of the Collective Bias®  Social Fabric® Community, I am creating a post that shows how playing dress up promotes creative play.  This shop has been compensated as part of a social shopper insights study for Collective Bias and their client, Costume Express. 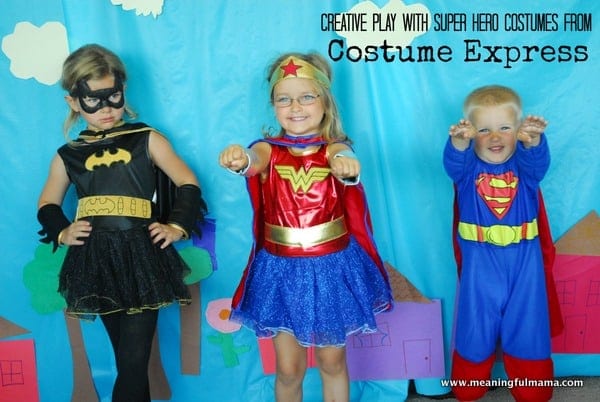 I have partnered with Costume Express to encourage you to unplug your electronics, get away from the “screens” in your life and turn to imaginative play. Playing dress up promotes creative play and develops your children’s brains in such an important way that you will never achieve from “screen time.” I read a book called, “Brain Rules for Babies,” by John Medina, and did you know that for every hour of television your child watches daily there is a 10% more likely chance that they will develop Attention Deficit Disorder. You can learn more facts about TV time in another article I wrote on the subject. It is harder, as a mom, to limit screen time. However, the benefits are great. We need to be willing to sacrifice some of our own convenience to help the growth of creative, active minds. The time you spend with them in creative play is invaluable. Costume Express is promoting this concept in the their #Unplug2Play campaign. I was able to go online to pick out these fabulous super hero costumes for my kids. While they have costumes for all ages and cover a variety of themes (dress up, animal, fairytale, historical, tv, & movies…just to name a few), I decided on super hero costumes for my kids. My girls already have a lot of girly costumes ranging from cheerleader to princess. Corban, on the other hand, hasn’t had a dress up outfit yet. It hasn’t prevented him from thinking he is a super hero. 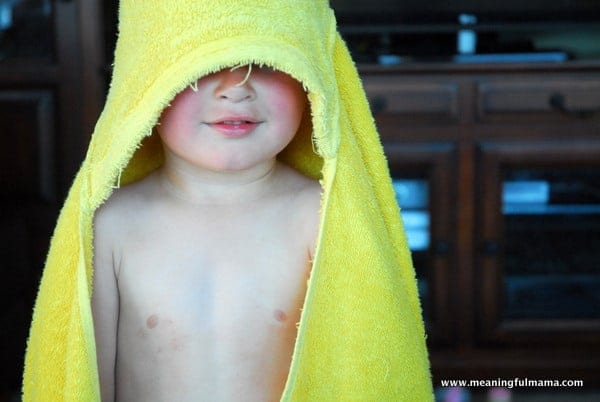 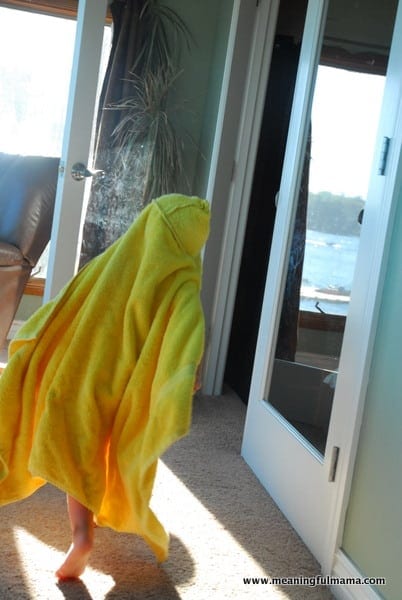 After his bath, he would put on his towel with the hood that grandma made him and run around the house yelling, “Super.” Don’t ask me where he learned it. He’s a boy, and it’s just innate. Yes, he is naked as the day he was born in these pictures, and it cracks me up. He would often just ask for his “super,” so he could run around. He also insists on having the hood down over his eyes. Does he think that’s his super mask? I don’t know. Obviously, my son believes he is a super hero despite not having the proper attire. Costume Express to the rescue. If my son thought he was a super hero already, you can imagine what he thought as he put on his new Superman costume. 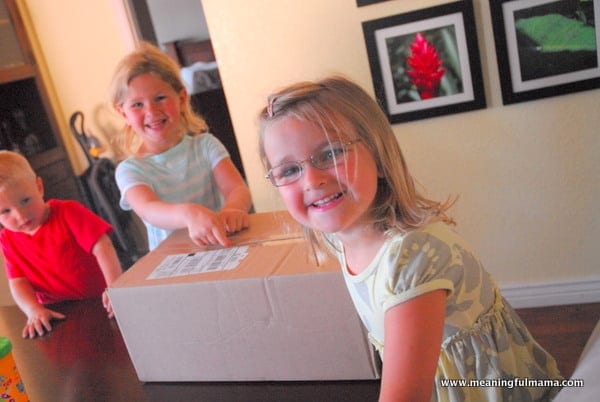 My kids knew the costumes were coming, and we had a countdown happening. However, you can imagine their delight as the package arrived 3 days earlier than shipping had said. 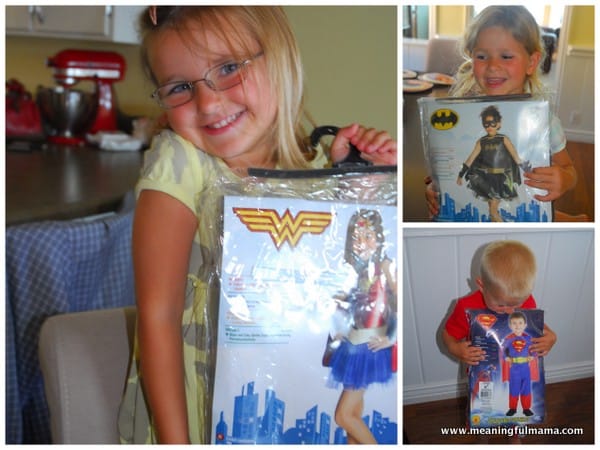 They hadn’t known what my husband and I had picked out for them, and each one of them was super excited. They tore into the packages immediately. 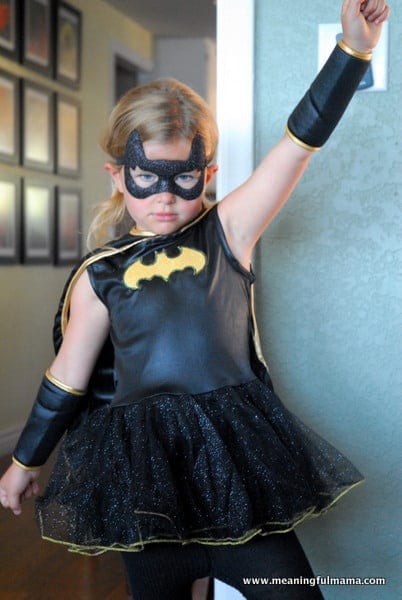 Abigail was Bat Girl and took on the personality immediately. She was convinced that as a super hero, she could not smile. I caught a few pictures of her smiling, but most are fairly serious. 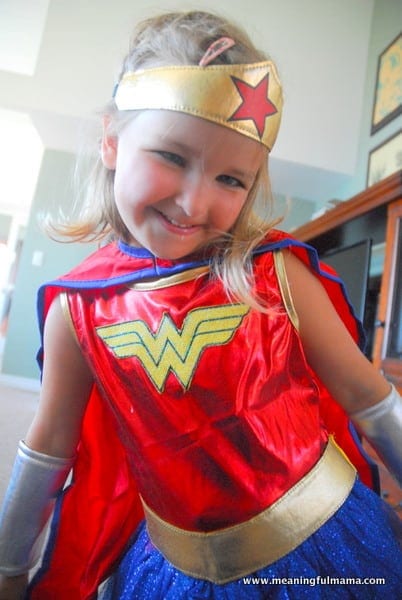 Kenzie looked absolutely adorable as Wonder Woman. I love that the girls costumes were tutu style. Wonder Woman is the female super hero I really remember as a child. 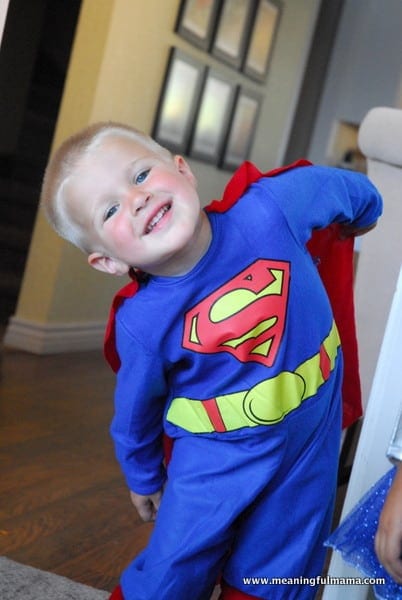 Corban was Superman, but we could never convince him of that. He kept running around the house saying, “Super Guy to the rescue.” 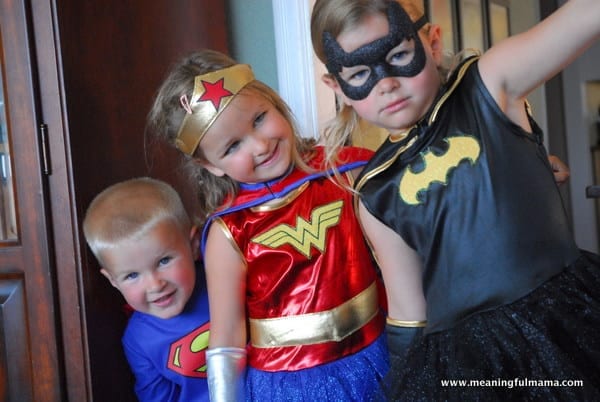 We all have the costumes. Is that enough? Well, with kids’ creativity, it just might be enough, but I wanted to do something fun to take it to the next level. I thought we’d have fun putting on a show. Every show needs a good set, so we got to work. 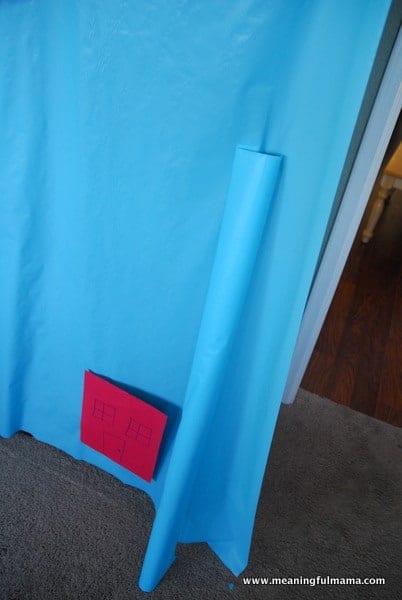 The backdrop was this rolled plastic tablecloths I had leftover from Abigail’s mermaid party. If you want the details about how we used it then or where we got it, make sure to check back to that post. I hung that from our entertainment center by just weighting a few books on top. 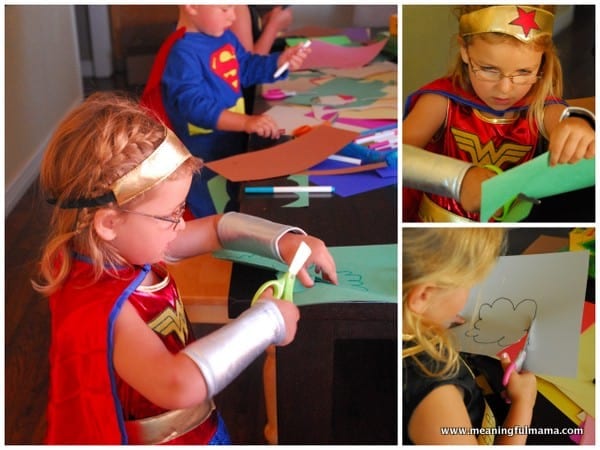 The kids got to work cutting out trees, clouds, a son, a flower and houses for our backdrop. 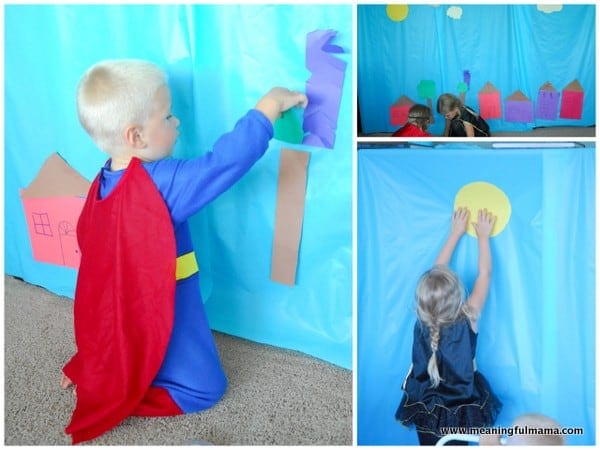 The kids set to work attaching all of the objects to the background with tape. 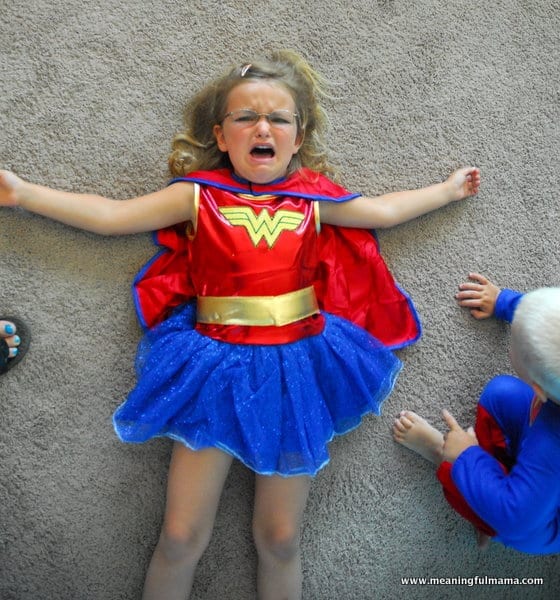 Wonder Woman had a meltdown somewhere along the way for some really silly reason. 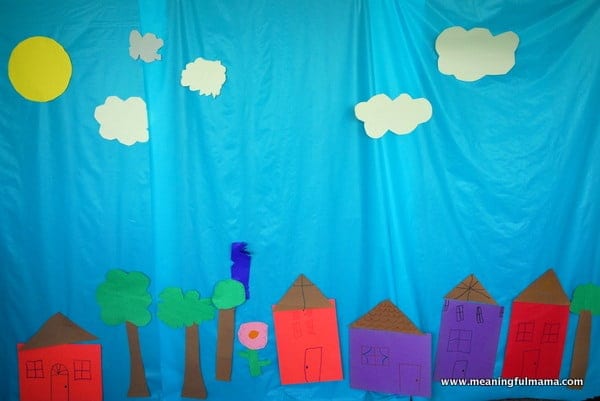 With our background complete, we were ready to start the show. 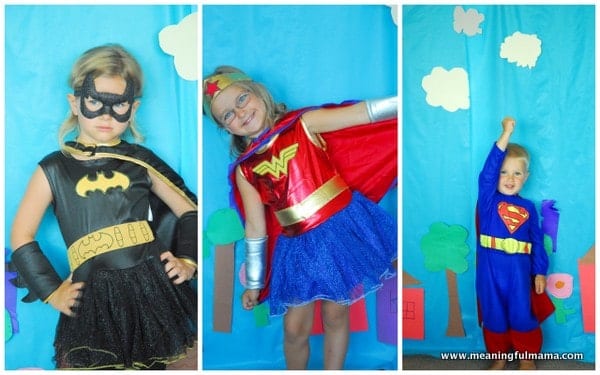 I introduce you to our heroes. 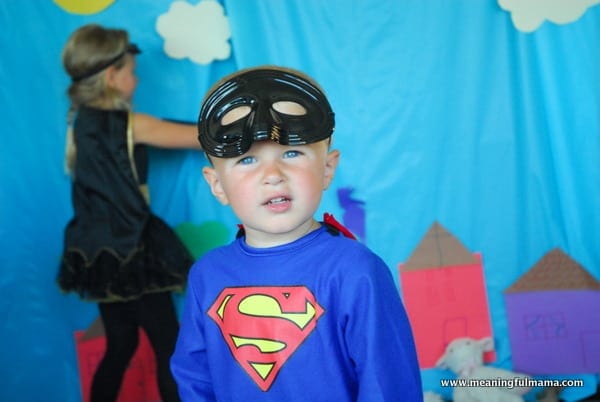 By the way, Corban wanted a mask too, so if you’re wondering where the mask came from, I had it on hand for him. 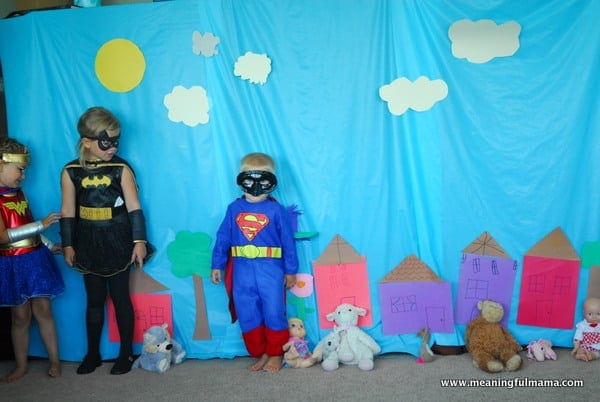 I told them to start coming up with ideas. When I quickly realized they didn’t have much background in super hero expertise, I had to explain to them there was normally a bad guy who was trying to do something…well…bad. The super hero was to come along and save people and make things right. They quickly realized they were short some cast members. So, they invited their stuffed animals, dolls and puppets into the scene. The wolf puppet (operated by me) became the villain. The other dolls and stuffed animals had to be rescued from the wolf, who had taken them to his secret hide out. It was a fairly elementary plot. It was made up by them, and I’m afraid I’ve never been much of a story teller so wasn’t much help. I tried to add some climax into our storyline. I learned something in school. 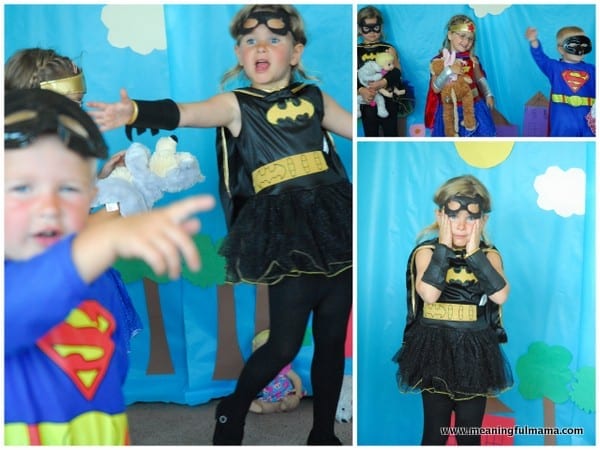 We had some great moments of theatre going on – how couldn’t you with costumes that got them so quickly in character? 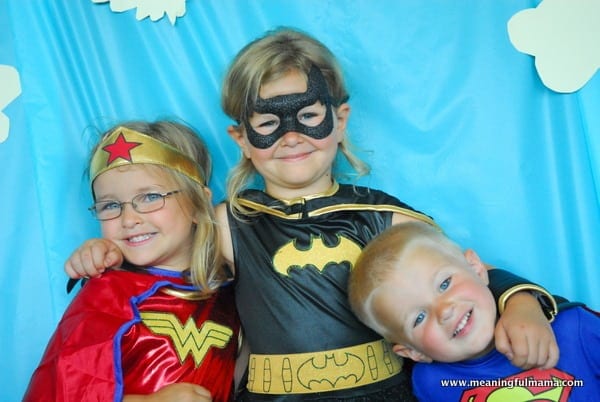 New costumes from Costume Express has really encouraged our creative play. These costumes aren’t just for this moment and this one production. I know I’m going to have a house full of super heroes running around trying to save the world for quite some time. Costume Express really has such a wide range of costumes that I know you’ll find something for whatever your children are “into” at the moment. The truth is, my girls weren’t necessarily “into” super heroes – until they got the costumes. Now, they’re ready to fly around to save anyone in need. This type of play really does foster creativity unmatched in other ways. I encourage you to get your children to #Unplug2Play in an imaginative way.

Costume Express has free shipping for orders over $75 and 15% off with email sign up. For more information on Costume Express check out the following links:

Please come check out more of my review at my Google+ Album.

You have the cutest super heroes around! (Ssshh! Don’t tell anyone I said that). It looks like they had a great time, and the addition of the black tights is a great one on the batgirl costume. I ordered a Tinkerbell costume from somewhere last year, and it was WAAAYYYYYYY short. I have a big booty, but this was obscene. Plus, the bottom was sheer. No bueno. Good improv, mom!

Thanks so much. I won’t tell a soul. Adult costumes are just so hard to navigate. That is no bueno. Thanks for commenting, Summer.

They are so cute