Home » Kids » Character Building » Teaching Kids About Grace
Grace
“For it is by grace you have been saved, through faith – and this is not from yourselves, it is a gift from God.” – Ephesians 2:8 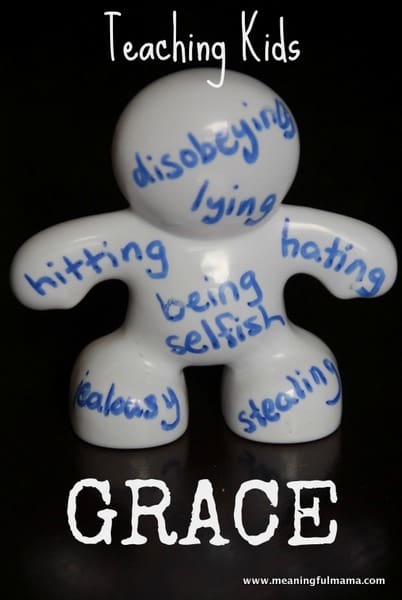 Teaching kids about grace is one of the most important lessons they can learn. I was having a hard time coming up with a lesson for this concept. I have been so focused on putting together Kenzie’s 4th birthday party that I think my brain was just not focused. However, grace is so important, and I didn’t want to abandon doing something to teach these kids the amazing, free gift of grace God offers everyone who believes. I am doing a Bible Study called “Covenant – God’s Enduring Promises,” by Kay Arthur. This morning she spoke on Romans 5:12-21.

Death Through Adam, Life Through Christ

12 Therefore, just as sin entered the world through one man, and death through sin, and in this way death came to all people, because all sinned—

13 To be sure, sin was in the world before the law was given, but sin is not charged against anyone’s account where there is no law. 14 Nevertheless, death reigned from the time of Adam to the time of Moses, even over those who did not sin by breaking a command, as did Adam, who is a pattern of the one to come.

20 The law was brought in so that the trespass might increase. But where sin increased, grace increased all the more, 21 so that, just as sin reigned in death, so also grace might reign through righteousness to bring eternal life through Jesus Christ our Lord.

Suddenly, my lesson on grace was born. I mentally missed the next 5 minutes of Bible Study as I was planning my lesson. This text is a bit advanced for my kids if I read it straight up. It is advanced in the text, but it is not advanced in concept, so I knew it was perfect. The main message is that just as sin entered the world through one man (Adam), so sin is wiped away through one man (Jesus Christ). I would love you to read this passage to discover how you can re-word it for your own kids or let it transform your own lives. I read excerpts, but I tried to emphasize that it is God’s abundant grace that cleans us from our sins. 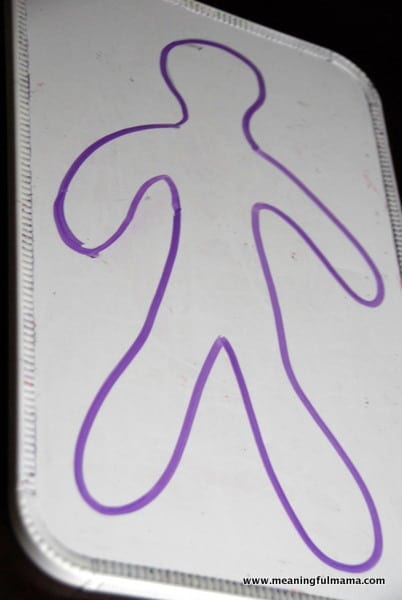 The first thing I did was draw the outline picture of a man. I intentionally made it big and bubbly so we could fit words in the body. 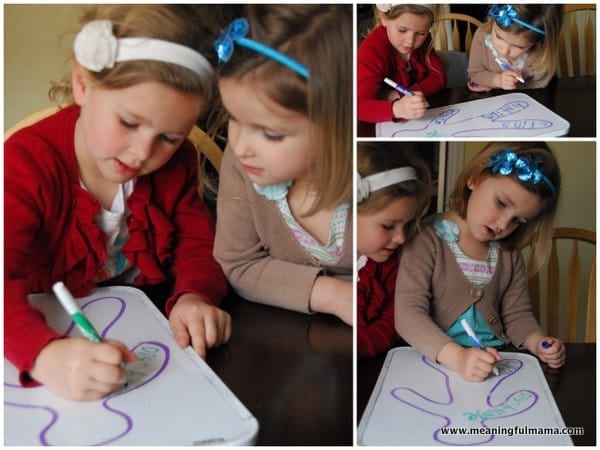 Next, I asked them about how sin entered the world. They recalled the story in the garden. I said this drawing represents the first man. I asked them to write down on his body their ideas of what some of the sins were that entered into the world at that time. 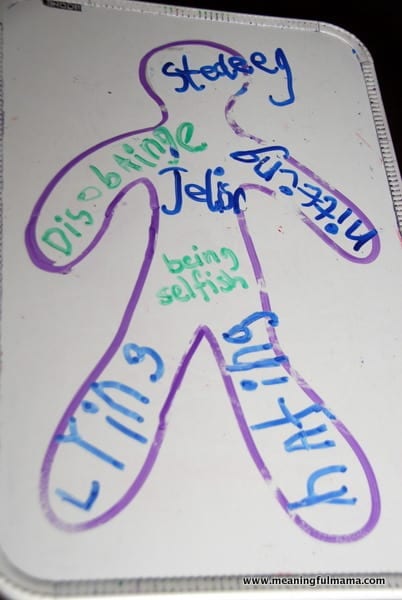 Some of the sins they came up with were: stealing, disobeying, jealousy, hitting, being selfish (that one was mine), lying and hating. While they wrote them on the wipe board, I wrote them on my little wipe away man we had in the “Pictionary Man” game. 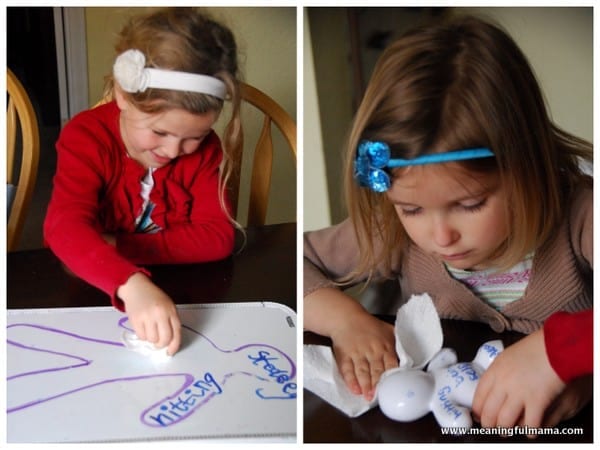 I then paraphrased the Romans 5 passage, emphasizing how we are given grace through Jesus’ death. I made it clear this is a gift offered to anyone who chooses to believe. After I finished, I told them it was time to wipe away all those sins. They both started wiping away the people until they were wiped clean again. Hopefully, this is a visual that sticks in their little brains. In teaching kids character in my character development series, I have no intentions of wanting them to think they need to be perfect. Sin is very real, and something that will always be present in our lives – something we will always battle. However, through God’s grace, we are forgiven and that kind of grace leads us to repentance.
print
Share
Pin1.3K
Tweet
Email
Print

Hi Jodi! What an awesome visual! I love it! I’ve been trying to explain grace this week to my boys and this may be the visual we need! Thanks!!!!!!!!!!!!

I always love your lessons! Thanks you for sharing at Mom’s Library!

Nice explanation of sin and God’s grace for children.

Wow, Jodi! I’m so glad you came by Maison de Pax – this is fantastic! My oldest is not yet three, but I am definitely storing away this lesson (and following your blog!) for the future. I think he might even be ready for this soon… we certainly can’t overemphasize the importance of grace, right? Thank you so much for sharing!! Excited to follow you. 😉

I just started following you too. I have loved working on the character with my kids. I started Kenzie at about age 3, but it helps to have her older sister to learn from and interact with in it all. I really hope these resources will be helpful when he is ready. That’s why I’ve developed the series.

Thank you! I am a preschool teacher at an international school in Indonesia. I am teaching the kids about grace. I think this will be a great to teach them the concept.

I am so glad it will be helpful, Kristin. Let me know how it goes. I hope you’ll check out the character tab on my blog. I think you might find it very helpful with lots of resources for you. Thanks for commenting.

I did the whiteboard one once. I actually drew the man with a permanent marker, which made it much easier to wipe the words off without losing the man. (you can then get the permanent marker of by scribbling over it with a dry-erase marker, but try this on a small area first to make sure!!!)

Great idea and much more accessible than the man I had on hand, since a lot of people don’t have that. Thanks for the tip!

Thank you! Its great even for a small children group of various age groups

Yes. I’m so glad you like it. I am passionate about my character development series and am so glad you find it useful.

Great idea. Next week is my boys lesson on grace. Thank for sharing

Yay! So glad you like it. Thanks for letting me know that it’s going to good use.

These visual activities are very powerful with kids. You can go one step further by having another man-shaped outline (Jesus) on the cloth. When you are done wiping, the sin and mess has been transferred to Jesus. When He died on the cross, He took the punishment we deserved for our sin and so justice was served. Grace is all the more powerful when kids see it is undeserved and makes what Jesus did all the more amazing. Thankfully in His resurrection He was washed clean – another visual there too?

I love this idea to take it even deeper and further. Thank you so much for contributing such a fabulous idea. Love it!

Thank you so much. 🙂

Lesson is engaging, I know my children will enjoy!!
Thanks for sharing!

Yay! So glad you are going to do this. Let me know how it goes!

Hello where can I find the actual mini sculpture in the photo, this is an awesome lesson!

Thanks so much. Here’s an affiliate to “Pictionary Man,” which is the game that came with the figure. https://goo.gl/FNfhqK I hope that helps. Have fun with it!

Thank you Jodi. I shared this page on Grace with my Bible study group. We are currently in the book of Ephesians at Smoky Hill Vineyard church in Centennial, Colorado. Another friend in the group found this page too!

Thanks so much for letting me know where these ideas are reaching. It’s so fun to hear how God’s working.

Thank you for this visual. It really helped me out.

I’m so glad it helped. I’ve been learning more about grace this past week in my Bible Study, and I realize I’ve done it a bit of a disservice. It’s so much more. Grace is a gift that keeps giving – providing us what we need daily for living life. I’m glad this visual did help, and I hope you enjoy exploring this concept more.