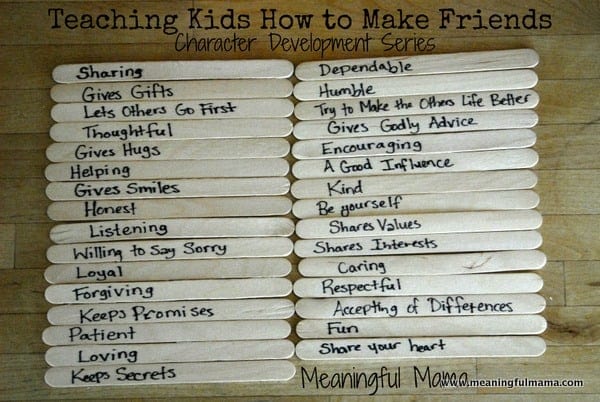 It is friendliness week in our character development series, so today I decided to focus on teaching kids to make friends. The answer to making friends is simple – Be one! That may be more simple then it really is in life. We can teach our kids to be all of the things we see listed on the popsicle sticks above and yet they may struggle to make friends. Kids can be mean, and your child may be treated poorly for any number of reasons. However, I firmly believe that if you teach your child to be a good friend, even if they aren’t experiencing the fruits immediately, they will learn to find the friends that are a good fit for them. It might not be the group of kids they’d want to be accepted by initially. It is going to come harder for some kids. Despite how our kids are treated, we need to teach them how to be friendly and how to make themselves people who can be respected because of the friendliness they show to others.

The game I created has the goal to help kids learn some of the qualities that make a good friends, and it was really enjoyed by the girls. I wrote out a bunch of ideas of what I thought a good friend is or does. 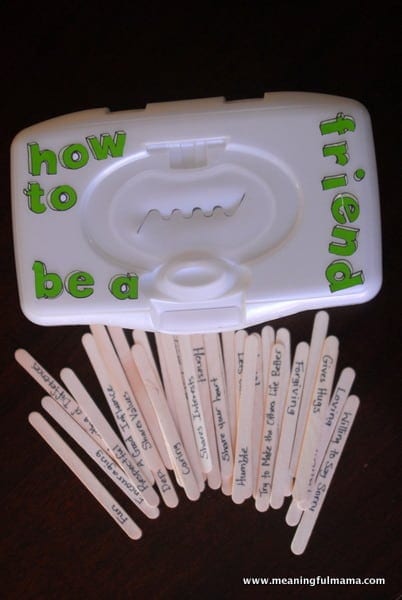 I took an old baby wipe container and put all of the popsicle sticks in there. I also used stickers to put on the box, “How to be a Friend.” This work was all in preparation for the game without the girls seeing. 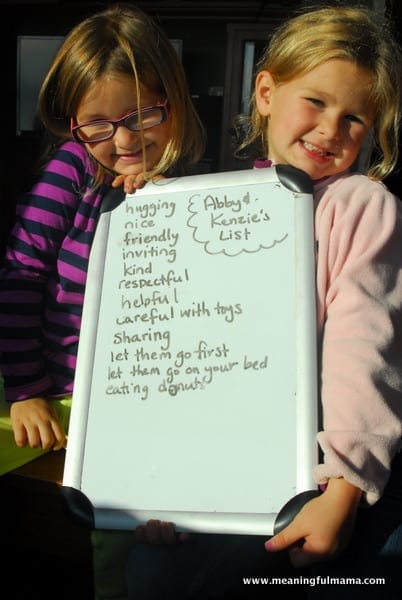 Then, I brought the girls in and asked them to give me a list of qualities that make a good friend. I wrote their ideas down on a white board. They were able to add to the list as we progressed in the game too, if new things came to mind. I told them that I had my own list that was located on popsicle sticks in the container. I explained to them that every time they had one on their list that matched one they pulled out of the container they would get a point. Each point would gain them something they desperately desired. For each point they received, I said I was willing to pick up five items for them in their room. 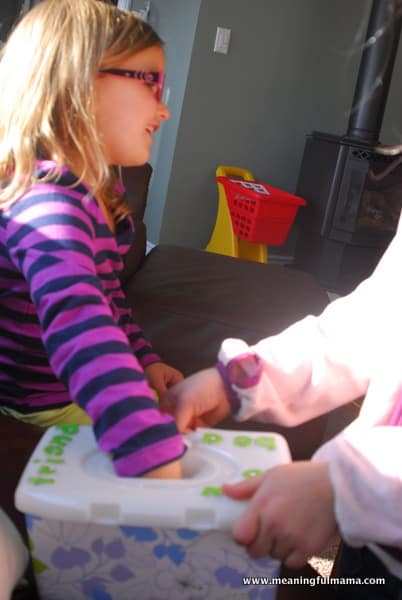 They took turns reaching in the container and pulling out a friendship quality. Abby would read them. As the ideas were discovered, I would explain the ones that weren’t obvious to the girls right away. I gave examples of what those traits might look like as they are played out in real life. I also made some clarifications. For example, with the idea that a friend keeps secrets, I had to explain that some secrets needed to be shared with an adult to help protect kids from getting hurt by themselves or others. I explained mom and dad are always a safe place to come with secrets. 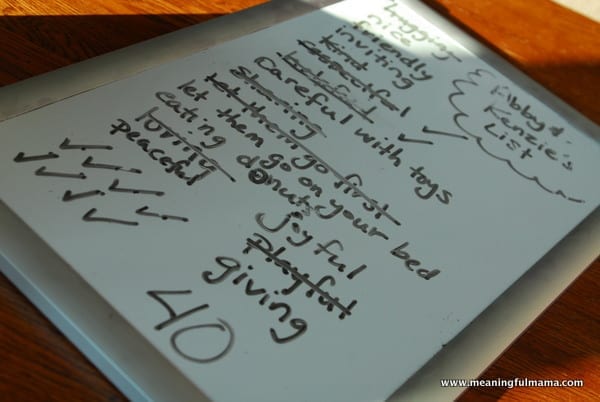 As they received matches, I would cross it out and put a checkmark to represent a point. I crossed it out if it was similar. For example, they said playful, and I said fun, which I thought was close enough. I counted it. They made 8 matches, meaning I was in charge of picking up 40 items in their room. Yes, there were that many to pick up. I wasn’t even close to done either. I do know it is ridiculous. Abby picked out my motive for making the pick-up the prize. She said, “Mom, you are being a good friend to us by picking up our room.” That truly was my motivation. I considered a bunch of other ideas – 5 minutes of television per match, an M&M per match, or game time earned. I decided I wanted to serve them. The kids stayed super involved the entire time. I hope you have a fun time being intentional teaching your kids to make friends by being a good friend.

what a sweet idea. my babe is still too little for this game, but i am always watching for opportunities to teach him about being a kind and gentle person. thanks for sharing this!

Thank you so much for commenting. It’s a great thing to keep on the radar when he is older.

I’m looking forward to using this in my 1st grade public school classroom this morning. I was searching for some curriculum to teach my students about being a good friend. We are at that time of year where kids are getting frustrated with each other and there is a lack of kindness. Sadly, I’ll have a leave a few of the popsicle sticks out, but students should get the main idea. I am actually going to use several of your lessons this week! Thank you for sharing your heart.

How did it go? I am so glad you found this post and found it helpful! I’m so happy when teachers find some of my character development posts because these are often things not taught in the home anymore. I really hope my site can continue to provide you with resources, and I’m so glad you are here!

The lesson went well. Students earned free choice time by making matches. They ended up earning 18 minutes. I’m finding that teachers are more and more responsible for teaching these things at school because students haven’t learned them when they enter school. I also used your toothpaste lesson for the importance of using kind words. They loved that one!

Thank you for sharing your idea. It is a creative idea and a good way to get kids to recognize that they need to be the friend they want to others around them.

Thanks so much. We were just talking about this again a couple days ago because two of my kids are at a new school. We talk about how to be a friend, ask questions and take a genuine interest in others. I appreciate you commenting. 🙂