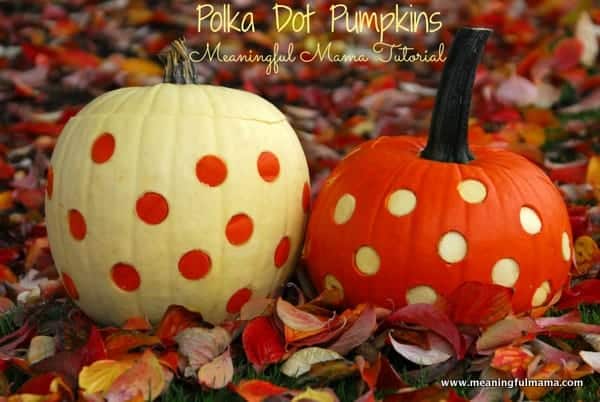 I am super psyched about the results of my two-toned polka dot pumpkins. I had the vision for these pumpkins a few years ago and never did them. That was before my blogging career. They’ve been in the back of my mind, but last year we did our Sesame Street pumpkins. I’m not sure where the idea came from for me. I think I have an idea that is original but I always wonder if I have seen it somewhere. We live in such a visual world. Was it on a magazine? Was it on Pinterest (except I think the idea came before my Pinterest era)? I can’t quite nail down where I may have seen it, so perhaps it is an idea that was just born in my own brain. The orignal thought I was discussing with my husband was doing a two toned pumpkin where I would take shapes from one color of pumpkin and stick it in the holes of another. I talked about using cookie cutters or a template of some sort. He is the one who suggested doing polka dots with an apple corer – smart guy. I love having him on my team. 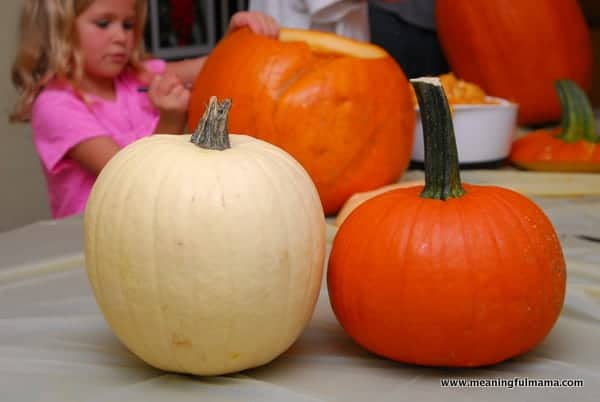 I picked out a white and orange pumpkin that were’t too different in size. 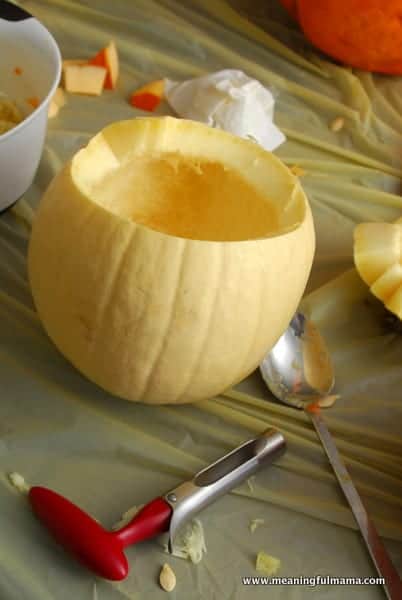 Then, I hollowed out both pumpkins. 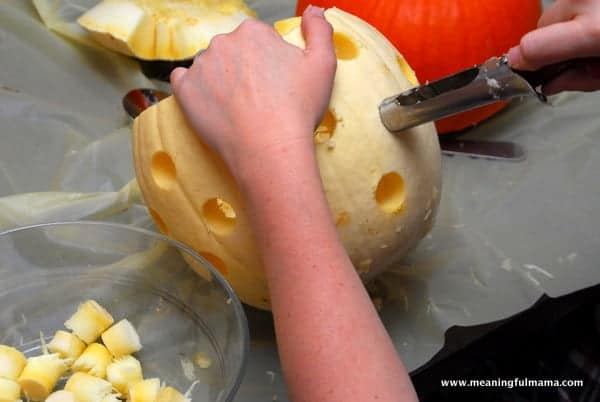 Using an apple corer, I carefully twisted into the pumpkin and then removed the pieces of circles from the pumpkin. 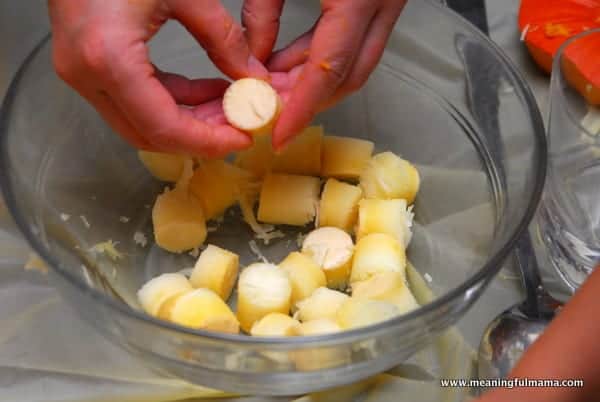 I made sure to keep all of my circles in a separate bowl. 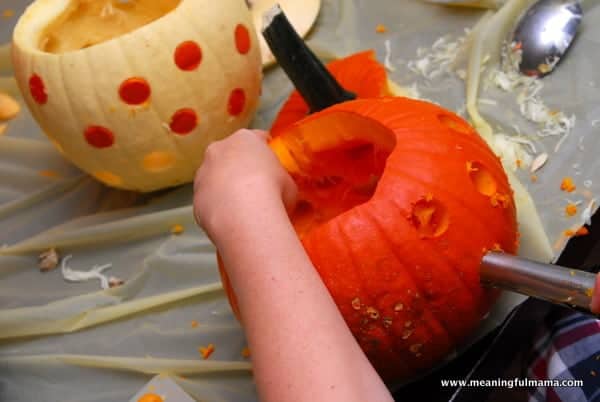 I then removed the circles from the orange pumpkin with the same method. I took those polka dot, orange circles and plugged them into the white pumpkin. 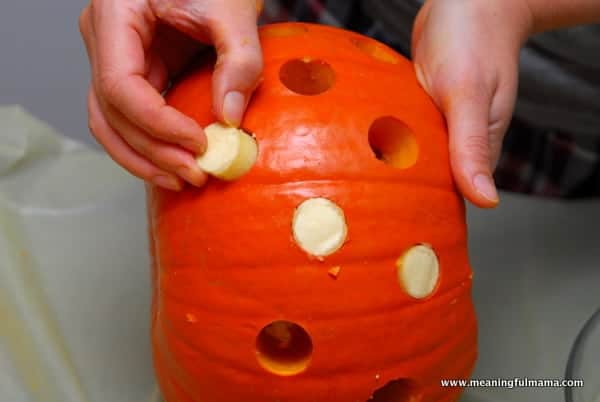 I then filled the orange pumpkin with all of the white polka dot plugs. 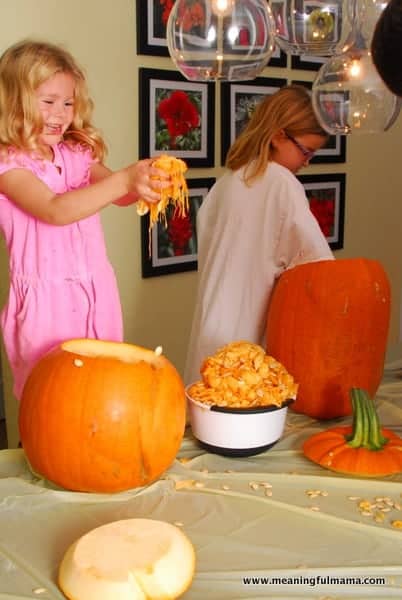 The kids were working on their pumpkins at the same time. Abby and Kenzie had no qualms about reaching in to grab out the pumpkin guts. Corban was not that interested. He has always been a little bit more hesitant about being too dirty. 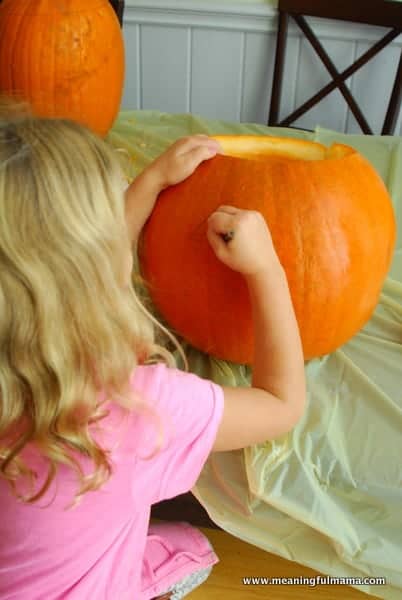 The kids drew on their own pumpkin faces. Actually, Corban didn’t draw his own. He decided he wanted dad to make him a Superman pumpkin. We discovered that a black pencil is the best way to draw a design on a pumpkin. 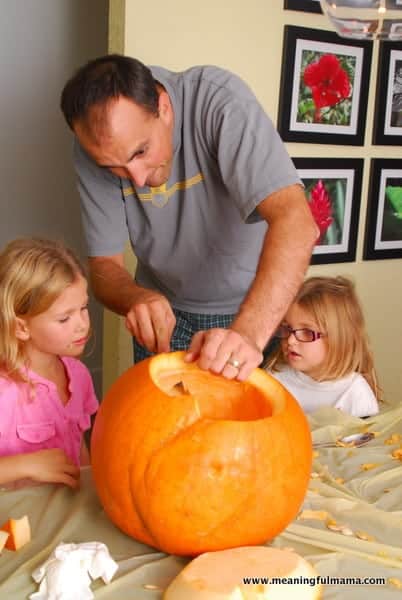 Then, my husband carved out their designs. 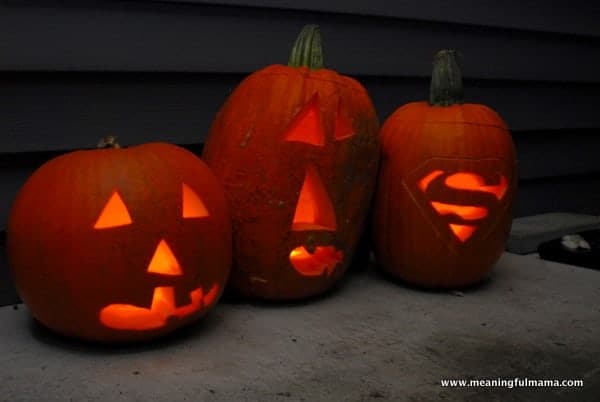 Here is the final results of the kids’ pumpkins from left to right – Abby, Kenzie & Corban. 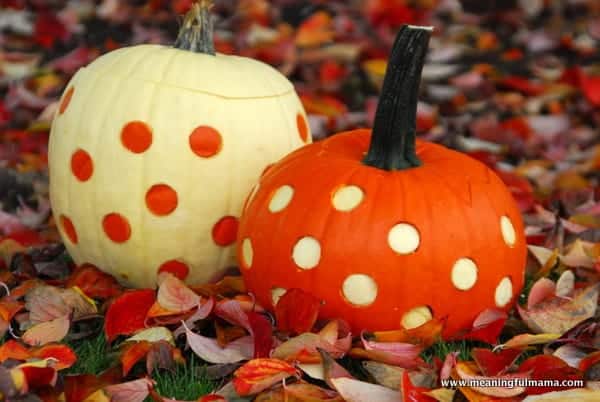 Here are the results of my pumpkins. One final step I didn’t mention was sticking toothpicks on the inside at an angle to attach the plugs to the main pumpkin. They would sit there fine without the toothpicks, but I know that as pumpkins begin to wilt and shrivel the plugs might start to fall out. 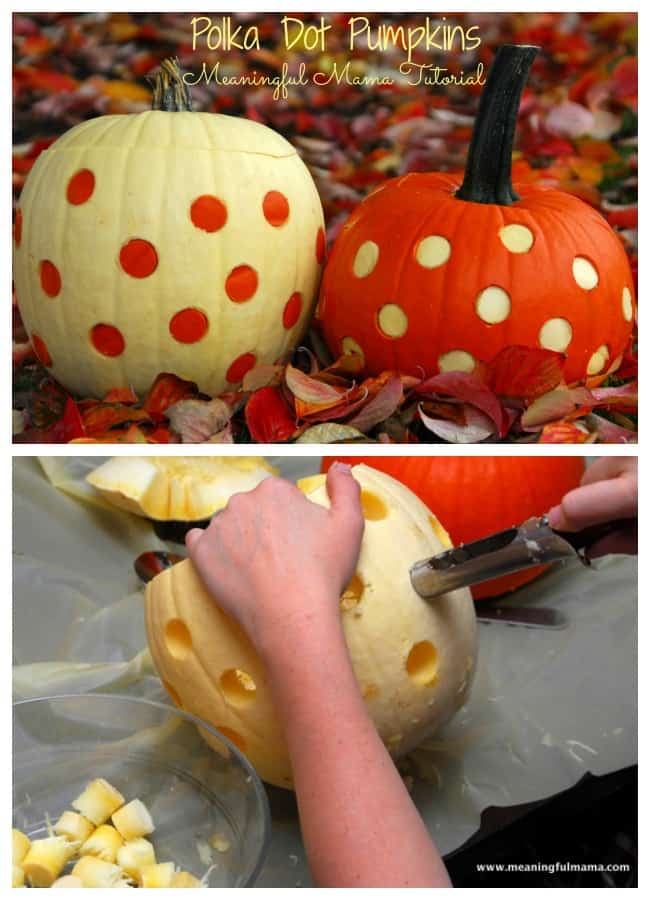 This is so stinkin’ clever, Jodi! I love it. I’ve done something similar with a drill bit, but as you can imagine, there’s no “core” to pull out after the drill has shredded it. Love the “swap” that you did here!

Thanks! I was pretty excited about the results. I love the beautiful pumpkin carving options that I see available now.