I grew up with an Atari and then a Nintendo. I know I spent hours in front of those devices. Video games were always an enjoyment for me. I now have a Wii, which I enjoy too. We don’t play it probably as much as we could. There could be some great family bonding time around the device. That said, I sometimes question this and want to go to the extreme of just not doing the video games at all. I invite you to explore the question with me: Video Games for Kids – Harmful or Helpful? I’d appreciate you weighing in on your thoughts. 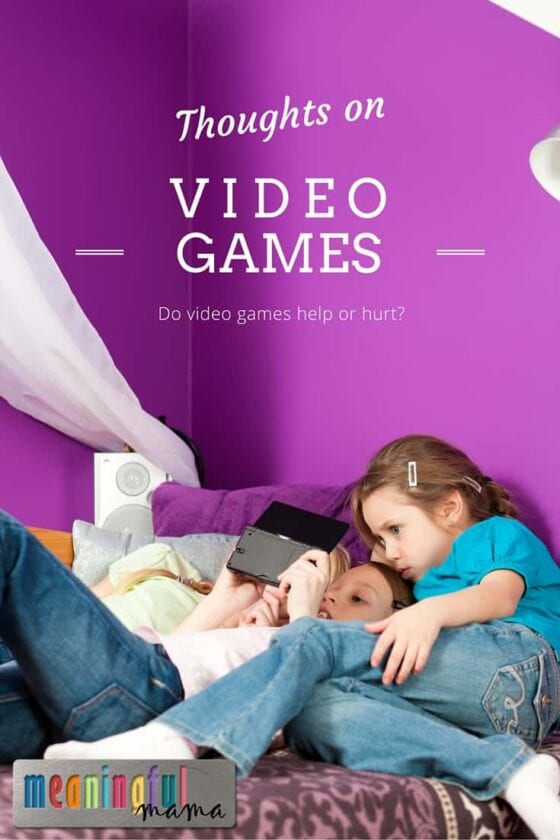 I read a book called, “Brain Rules for Baby,” by John Medina. My statistics will be coming from that book.  One startling fact is that “Childhood obesity is three times more prevalent in gamers than in non-gamers.” (pg. 150) With the weight gain, kids are showing signs of disease that, in the past, haven’t shown up until middle and later life. The brain increases in executive function 50-100% with physical exercise. If kids aren’t getting it because of games or TV, we are enabling poorer performances all around.

That said, new research does point to positive benefits of gaming. “A growing body of university research suggests that gaming improves creativity, decision-making and perception. The specific benefits are wide ranging, from improved hand-eye coordination in surgeons to vision changes that boost night driving ability.” – Wall Street Journal As you can imagine, some video games really promote higher level thinking such as developing strategy and problem solving skills. Some of the other potential benefits from gaming mentioned in this article included faster reaction time, the ability to manipulate 3D objects, ability to follow instructions, and intake of more simultaneous information helpful for multitasking. According to Forbes, there can be a positive impact when families game together.

If your kids are beginning to show addictive behaviors to video games, I might suggest a time of cutting them out completely or severely limiting the usage. For kids that aren’t showing these behaviors, there are great games on tablets and phones. I love to promote learning games, but there are benefits from a variety of games that might not be in the “learning” category. Growth can really happen well through some of these learning  or strategy games, and I have experienced that first hand. For example, I love our Osmo (here’s the link

to buy Osmo on Amazon) and have also shown you how I have a tablet that is only filled with learning games for kids. However, I advise that you don’t use the benefits of video as an excuse to put them in front of the tablet all day. The fact is that nothing has proven to be more effective with your kids that one on one attention from you, and there is the risk stated above of obesity and health problems.

I would also encourage you to carefully monitor the content of the video games. I extrapolate from a television study where kids watched certain kinds of programing and you saw them reenacting the behaviors seen on the shows in play. I see this in video games as well. Another risk is that “Brain scans show that violent video games can alter brain function in healthy young men after just a week of play, depressing activity among regions associated with emotional control, researchers at Indiana University recently reported.” – Wall Street Journal

Like with TV, I would encourage you to limit the time spent on video games. I tend to take the age old stance that moderation is one of the keys to successful living. You might want to read my post title “The Truth About TV Time” that gives not only provides facts from leading research but also show you a little about what I do with the information I learn about screen time as well.

I’d love to hear your personal experience and have you weigh in on the question: Video Games for Kids – Harmful or Helpful? 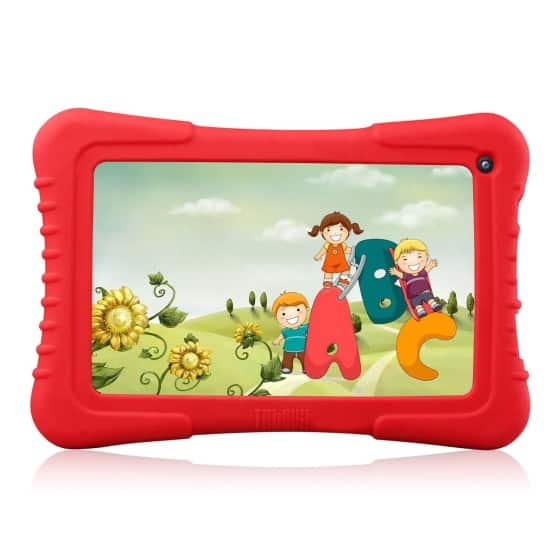 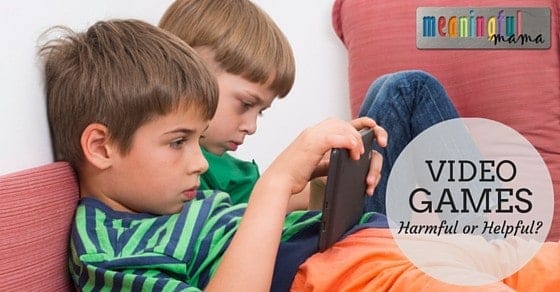 I see video games for children the same way I see alcohol for adults: it’s okay in moderation. If you use it every single day, or in large quantities at a time, or to help you deal with life’s discomforts, then there is an issue. An occasional, small quantity use is okay.

I totally agree. Thank you so much for weighing in. Most things are absolutely fine in moderation. I can never say “all things…” 🙂

Video games in moderation can be beneficial. A scientist by named Andrew Przyblki (crazy name I know) conducted a study back in Sep of 2014 entitled “Electronic Gaming and Psychosocial Adjustment”. According to Dr. Przyblki’s research children who play for less then one-third of their daily free time showed higher levels of pro social behavior and life satisfaction. The study can be read here:
http://pediatrics.aappublications.org/content/134/3/e716.short

Of if that link doesn’t work just google “Electronic Gaming and Psychosocial Adjustment”.

Thanks so much. I totally think that’s the key – video games in moderation. Thanks for the article. My son and I have been playing this game on the computer that really works on problem solving and logic but is lots of fun for both of us. I feel OK about it because I can see his little brain ticking away. 🙂