Home » Kids » Character Building » Teaching Kids Self Control – Word Ring
Self Control
“Like a city whose walls are broken down is a man who lacks self-control.”
Proverbs 25:28

control or restraint of oneself or one’s actions, feelings, etc.
Reason Chosen: Self control is such an important thing for humans to learn.  We have temptations hitting us at every angle.  It’s not wrong to have feelings and emotions, it becomes wrong if we decide to make certain choices under those emotions.  If children can become more accomplished at self control when they are little and often dealing with smaller issues (like whether they are going to pitch a fit for not getting what they want), then they will be better at having self control when they have to make some of the bigger decisions later in life (whether to try drugs or dealing with sexual temptations).  As they develop more self control, life becomes easier for the kids but also for parents too – less falling apart, less coloring on the walls, etc.  Your children will have more success later in life if you can successfully help them develop self control now.
Word RingAt the beginning of each week, the craft will be exactly the same because we will simply be adding a new word to our already established word ring. 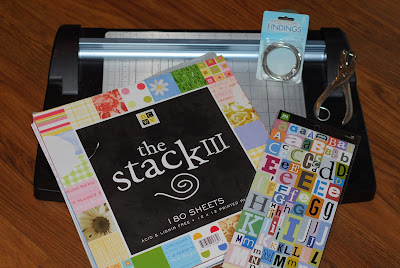 The girls chose a paper style they thought would look good with the letters they chose.  We then sounded out “self control” together. They took turns finding the letters we needed and sticking them on the paper…they’re kids – the letters will not be stuck on perfect.  I then cut the paper to the same size as the paper from last week. We punched a hole in the corner and stuck it on our binding clip.  Each week, a new word will be added to the clip in similar fashion.  I then wrote the Bible verse on the back.  If your kids are older, have them do it themselves.  We’ll spend this week learning the word, meaning and memorizing the scripture. 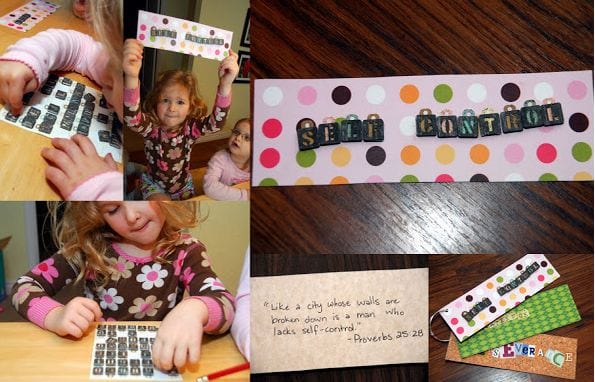 Hi there! We have been trying our best since our son was crawling to teach self control, mostly for our habit and mindset, but in ways a baby can understand short phrases “not for you” and “leave it”. We see the wheels turning when he wants to touch a laptop and sometimes he does, sometimes he tells himself no and walks away. He is now 1.5, and I’m wondering at what age do I REALLY start teaching by using materials like this?also, I plan on homeschooling with a main focus on character-is this homeschool curriculum? Thank you!

I think you sound wise in how you are going about it, knowing that even at this young age he understand what you are trying to communicate. I have also loved the phrase “just look” because I believe in telling kids what they can do. I would say 3-5 is a good time to start the character development series I have created. I’m so excited to know that you’ll get great use out of my character development lessons while you are homeschool. Let me know if I can be of any more help! I really want to focus on making it better. It was my first year of blogging when I created a lot of it, and I see a lot of room for improvement. :0)