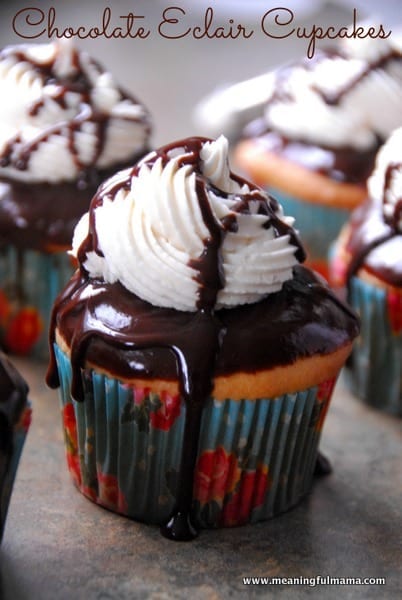 Who doesn’t love a chocolate eclair. I decided to try it in the form of a cupcake. With a cream filling and a chocolate ganache glaze, this cupcake is elevated to the next level. My cousin just got married, and I had the privilege of attending their wedding to watch them tie the knot. The cake was really good. There were three different layers – carrot cake, red velvet and chocolate eclair. I took a bite of all three layers – research, you know! The chocolate eclair layer stood out to me. When I was  considering what kind of cupcakes to take to Abby’s end of the year kindergarten party, I decided I wanted to try this. I had hosted Father’s Day the night before the morning kindergarten graduation and celebration. As I decided I was going to try and make up a cupcake recipe after our guests had left from Father’s day, my husband and I decided I was somewhere between ambitious and crazy. I’m pretty sure I’m more on the crazy side. However, I was determined, even though I realized about 10:00 at night that I had no whipping cream to make the ganache or frosting. Sigh! It was an early morning run to the store after I dropped Abby off at school at 8:00. That means between 8:00 and 9:15 I had to go to the store to buy whipping cream, come home and make a ganache, a frosting and finish off decorating the cupcakes. I had already baked the cupcakes and made the custard the night before. I inserted the custard into the cupcake prior to taking Abby to school.  I just finished in time. They were worth the effort. I really enjoyed them and also received compliments from others. So, if you want to take your cupcakes to the next level, this might be a really fun recipe for you to try. I would say it’s not for the beginning baker though.

Heat milk until just boiling. Remove from heat and add vanilla and butter, stirring until butter melts. In a separate bowl, whisk together yolks and sugar until light and fluffy. Add cornstarch and mix until smooth. Add 1/3 of the milk mixture at a time, whisking in between additions. Pour through strainer into saucepan. Heat on medium high heat, whisking constantly until thickened. The thickening can sneak up on you, so keep your eye down while you are whisking. Remove from heat immediately and continue whisking a bit after heat to keep it smooth. You’ll want to put it in the refrigerator for a bit, but cover right on the surface with plastic wrap so it doesn’t develop a film. I put it in the refrigerator for an hour to cool completely.

Put chocolate in a double boiler or in a glass bowl over a pot. Scald the cream (heat it to the boiling point where small bubbles form around the edge of the pan). Pour scaled cream over the chocolate. Stir slowly until smooth. Press the mixture through a mesh strainer to remove any lumps. Use the glaze at once, or store covered and reheat it.

Bake the white velvet cake or your favorite white cake. Make the cream filling. The cream filling will be inserted into the center of the cupcakes. To see how to do this, please visit my Peanut Butter & Jelly Cupcake recipe. You will want the custard (cream) filling at room temperature. I had to squeeze pretty hard to insert the filling into the cupcake. 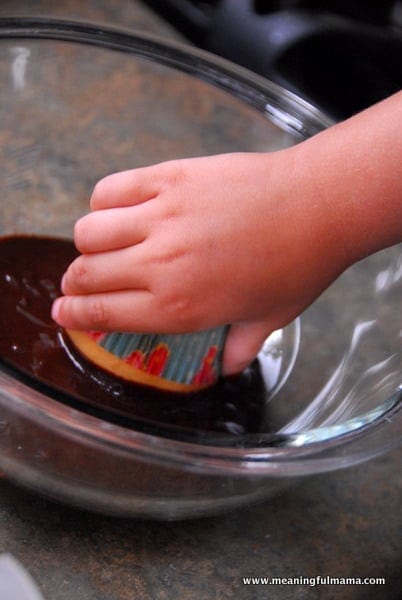 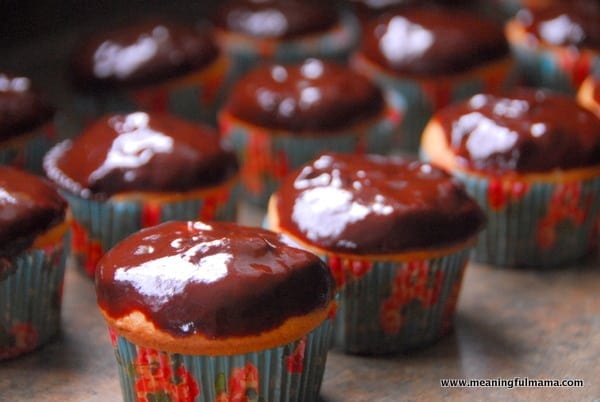 Make your ganache and dip top of the cupcake into the glaze. Kenzie helped me with this step. Because I was in a hurry I stuck them in the refrigerator a bit to let the ganache firm up on top of the cupcake. I did that while I made up the buttercream. 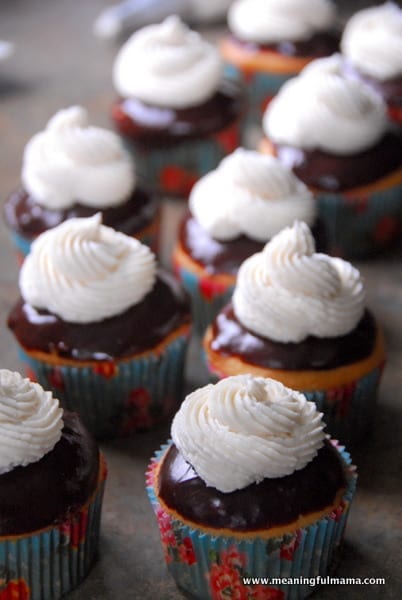 Once the ganache firmed a bit and was cool to the touch, I twirled the buttercream on top of the cupcake. I then drizzled Hershey syrup on top. 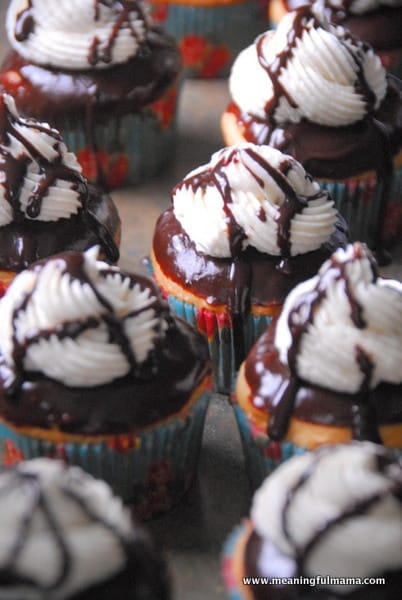 These look so yummy! I would love it if you would come and link this up at my link party
Dandelion Wishes Wednesday.

I’ve been so busy…hosting a party this week. I haven’t had time to link up much. I’ll try and remember you for the future. Thanks for commenting.

this was wonderful and absolutely scrumptious! Thank you for posting- will do this recipe again! Although, I was wondering what percent of milk you used for the custard or if it matters. I used 1% and it turned out slightly lumpy- but still delicious 🙂 Thanks again!

Hello Rylee – I’m so glad you did this recipe and enjoyed it. I think I used 2%. I don’t know if it would make a difference or not. Whole milk, of course, is going to taste the best. 😉 Thank you for taking the time to comment.

How many cupcakes would this cover?

This will make 24 cupcakes. I hope that helps!!

I have to try these awesome looking and delicious sounding cupcakes. I pinned them for my use and I want to thank you so much for sharing your Yummy cupcakes!!

Let me know what you think. We love them. Thanks for commenting.