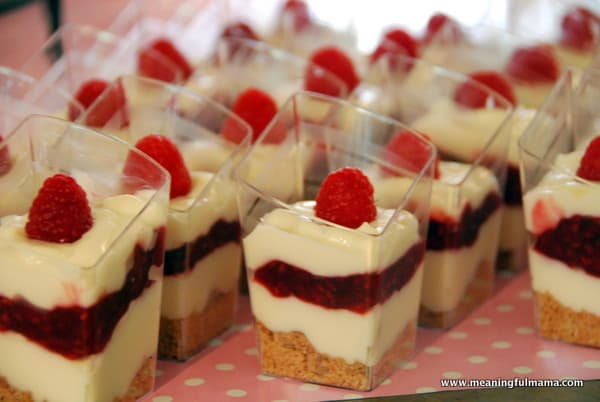 Dessert shooters a big right now. I love viewing them. They’re so cute. I have always thought it would be great if they had “bites” on menus because I just want to try everything. $1 bites. Yum. Well, I have seen the dessert shooters. I haven’t really had one. I browsed the internet a tad for an option, but I wasn’t satisfied with what I found. I think being in the blogging sphere has made me a bit more brave in branching out and trying my own thing. I’m normally a recipe follower. I’ve even said, “I don’t think you need to be a good cook. I just think you need good recipes and know how to read.” I semi decided to make up my own dessert shooter. I say “semi” because I cheated a bit. I stole from two recipes I already have posted about. The bottom layer of this shooter is a crumbled version of my key lime pie crust. The cream layer is the filling for the red, white and blue Fourth of July sugar cookie tart I made. The raspberry is just a simple raspberry compote of sorts. This was definitely a huge hit at the baby shower this past weekend. This can be made ahead. It made 20 shooters, and you may have some left over. I have had a couple inquiries about where I purchased the containers for this dessert. I found them at Party City.

Preheat oven to 350 F. Mix graham cracker crumbs, sugar and salt in a medium bowl to blend. Add melted butter and stir to coat well. Leave as a crumble and put into a 9×13 pan. Bake 5-7 minutes. Cool. 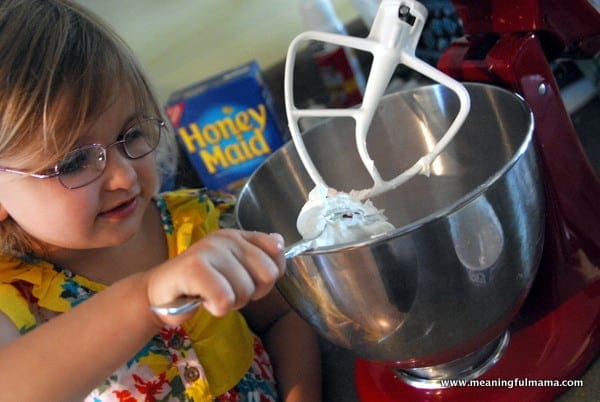 We made this dessert the same day we made the cookies. I accidentally used this picture for the cookies.

I love your “About Me” info and these dessert shooters look amazing. I think my hubby would love these. Will have to put them on my list of recipes to try. Thanks for sharing.

Look at how creative you are! These are just too cute. I’m officially your newest follower and I can’t wait to see what else is in store on this lovely blog of yours! Yay for being blog friends!!

My mouth is watering!
These are super wonderful, and I love their size 🙂

I love this idea and they are so pretty! I would love if you could link up to Thursday Food Fest. I’m at http://www.theeaseoffreeze and I open Wed at 7pm. Hope to see you! Sarah

These are TOO cute to eat! And I bet they are just as tasty!

Wonderful idea and so tasty too!

Thanks for visiting me at A SEason for All Things. I’m your newest follower and I look forward to reading more great posts and recipes.

I love mini desserts and these look awesome!

Yum!! Those look wonderful! I could have one and not feel totally guilty for enjoying it. Love mini desserts 🙂

Kinda like jello shots without the alcohol and if you can eat just one you’ve really portioned controlled.

Looks absolutely delicious! Thank you for sharing. Visiting from Six Sisters. Would love it if you would share this at my Make it Pretty Monday party at The Dedicated House. http://thededicatedhouse.blogspot.com/2012/07/make-it-pretty-monday-week-8.html Hope to see you at the bash! Toodles, Kathryn @TheDedicatedHouse

I love these, they look delicious and the portion size is just right.

0
Reply
Baked In The South

yummo! Would love to have you link up to our party!

YUMMY! I could so go for a raspberry cream shooter right now! Please come share this and link up at our “Home is Where the Heart is” Link party! We’d love to have you! 🙂 Feel free to link up other posts that would be helpful to others as well!
http://www.homesteadsimple.com/home-is-where-the-heart-is-link-it-up-wednesdays-4/

Lovely berry dish. Berries and currants are this week’s subject for Food on Friday. Would you be happy to link this in? We are looking to create a fantastic collection of berry dishes. This is the link . I found you in the Simple Living with Diane Balch party.

thanks for linking this in. Cheers

These look amazing! The containers are a great presentation for the dessert shooters! Thank you for sharing this at Saturday Show and Tell. I can’t wait to see what you have for this week! I look forward to seeing you there.
-Mackenzie
http://www.cheeriosandlattes.com

Yummy! I love these little desserts. Raspberry and lime is a great combo. I have seen these around so I was so excited for you to share them at Mom’s Library. Thank you!

I would love to make these for a wedding. How far in advance could I make and assemble the shooters?

You could have all the components made up a few days in advance. I would say a day ahead would be safe. Maybe even two. I would try it before the wedding to see what you think. I know I had left overs I was eating for a few days that still tasted could. The bottom crumb layer does become a bit more moist after the cream part soaks in. Let me know how it goes and what worked. It would be helpful for others that are considering these.

hello i’m planning to make it today. can i make it over night and have it for tomorrow night party?

Yup. It shoudl be just fine. Let me know how it goes!