Home » Kids » Crafts » Children’s Art Cards
I love children’s drawings.  Abby has really impressed me recently with some of her artwork.  Kenzie also is making her first attempts at creating pictures that look like something.  I am saving some of these creations in our art binder, but I’ve wanted to find other ways to showcase them.  These children’s art cards are a unique and creative way to celebrate the artwork that your child produces. 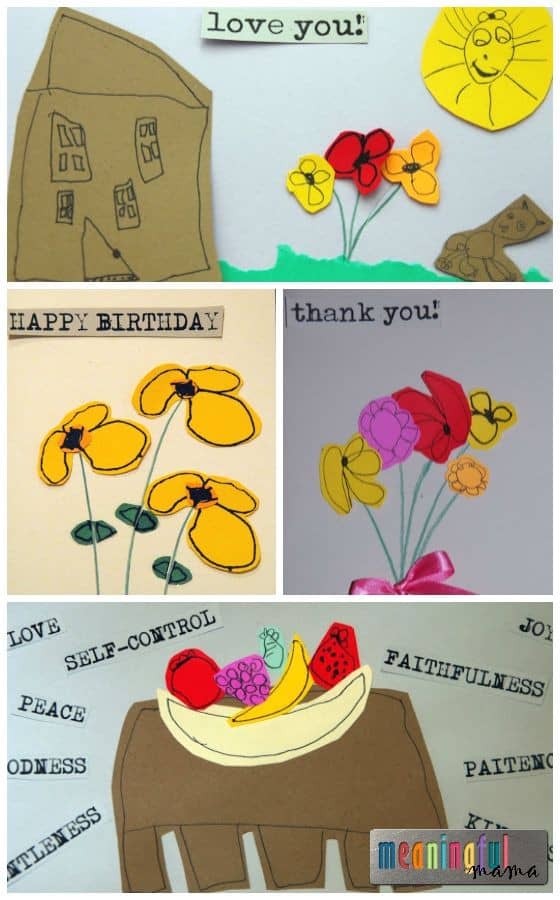 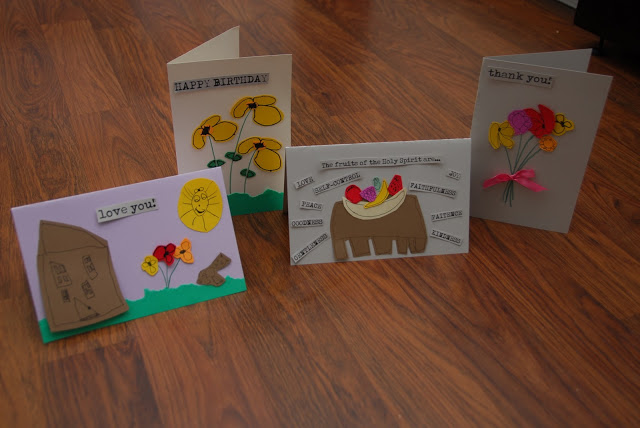 Materials Needed:
* Colored Stock Paper
* Pen
* Double Stick Tape or Double Stick Foam Tape
* Printer with scanning or photocopying abilities
The first part of the activity was having the girls draw.  I gave each one of them a black pen and had them draw whatever pictures they wanted.  Abby drew a bunch of fruit.  I asked her to draw a table and a moon shape (bowl) to complete an idea I had once I saw her fruit.  She drew the cat and some other animals on her own.  She also drew a sun.  I asked her to draw some flowers and a house.  Once they were done, I waited until they were asleep to work on the rest.
I scanned all the pictures and pulled them up in Publisher.  I re-sized some and grouped them according to the color paper I wanted them to print out onto.  I then printed them and began cutting around the images.  With some double stick tape, we were able to stick them down in the configuration we wanted.
I added some torn paper grass and a some hand-drawn stems for the flowers and a little bow.  My husband typed out the words to stick down.  I love the results and Abby is so excited to give them to people.  I worked the cards without Kenzie (while she was napping) because she is still young and has images that wouldn’t quite work in this format. I didn’t want her to feel bad that we weren’t adding her work to the creations.  She had fun coloring though. 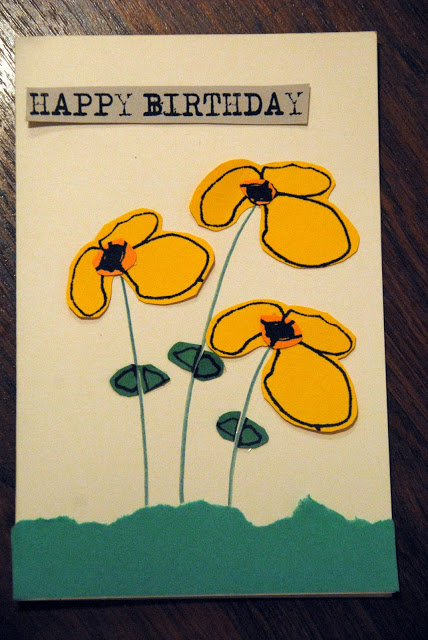 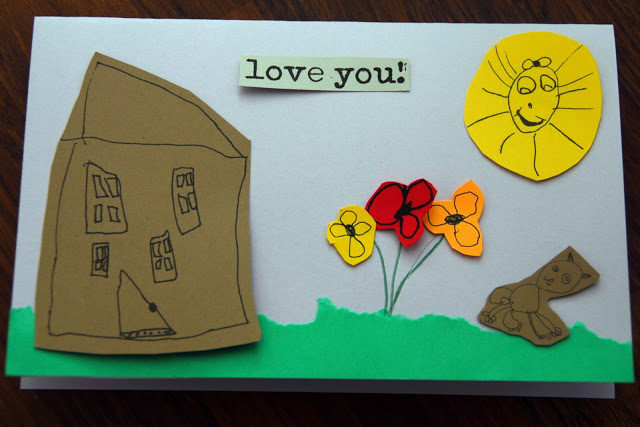 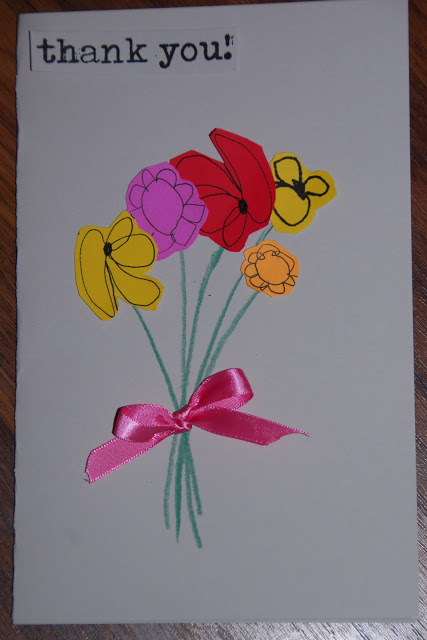 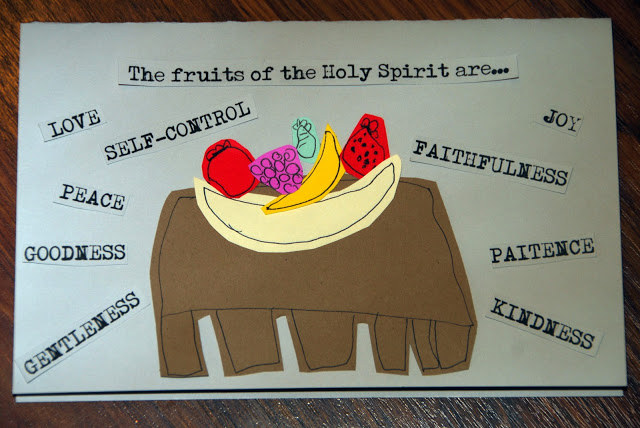 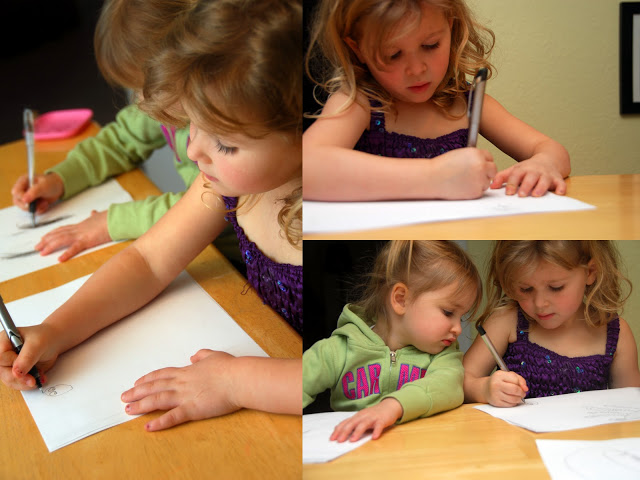 i love this idea, i’ll do this with my daughter’s drawings

I’m glad you will. It’s such a fun way to make them special.

I absolutely LOVE this what a cool idea I hope you’ll add it to my What We Wore and Made party over at http://raegunwear.blogspot.com/search/label/WWWMW

Thanks for the invite. I grabbed your button too. Glad you like the idea. We had a lot of fun putting it together.

Thanks so much, Alyson!

Wow, these are lovely! I know what you mean about trying to find a place for all the drawings, I have a few girls in my class who are constantly drawing. I think I will use this idea with them! Thanks for linking up to Thinky Linky Thursday!
Lori @ Cachey Mama’s Classroom

I’m so glad you like them. Thanks for hosting the link up party. It’s such a great way to connect with other bloggers out there.

I think this is SUCH a super idea! The cards look beautiful,!!! I shared this with my facebook readers here: https://www.facebook.com/pages/living-life-intentionally/261252997248957 – Thanks for linking up to TGIF & have a GREAT week,
Beth =-)

Thanks so much for sharing this, Beth. I need to learn to utilize my facebook page more. You’ve done such a good job of that. I appreciate the shout out on there. I hope you’ll try these with your own kids’ work. I’m excited to use them for people.

Jodi, this is such a GREAT idea!!! I’ll be featuring your children’s art cards tonight at Project Queen’s #19 Highlight Party. Thanks so much for linking them up!
Mandy
PS Your daughter’s are adorable.

Thanks, Mandy. I’m a little biased, but I think they’re pretty darn cute too ;-). Thanks for hosting. I’m excited to have it as a highlight. It was such a fun project for us that yielded great results that anyone could achieve. I had recently set up my link parties tab and had accidentally grabbed the “I’ve been featured on Project Queen” button. I’ve been intending to change it, but now I don’t have to.

What darling cards, I always find handmade…especially by little ones the absolute best! Thank you for sharing these at A Crafty Soiree!

Thanks, Katie. We had a lot of fun doing these.

This is such a fabulous idea, Jodi! So glad you stopped by my site to let me know about it. So precious & adorable…I have LOTS of artwork that could be compiled into these types of beauties!! Can’t pin this fast enough!
{HUGS},
kristi

This comment made me happy. I’m really glad you’re going to try them. Thanks for pinning the idea too!

These are beautiful!! Thanks for sharing this with us at Sharing Saturday.

Thanks so much for hosting. You’re doing a great job.

Another great idea! Sometimes my daughter likes to draw little drawings on big pieces of paper. This is a great way to combine those into a more manageable and useful project.

This has actually been one of my more favorite project we’ve done. Thanks for commenting.