Home » Kids » Crafts » Heart Collage
I love doing collages with my girls.  Why?  It’s easy to do with preschoolers, and I love the way it turns out.  We’ve seen in on my blog before with the Time Capsule , Cupcake Liner Art and even (in a way) Making a Letter with Letters. As I’ve been looking at blogs or following along on Pinterest I’ve thought, “There are a lot of clever hearts out there.”  I decided I could showcase them by doing a large heart collage.  Unfortunately, I didn’t print out enough hearts, and we didn’t finish in time.  So, I’ll have to replace this original picture once it’s done.  It’s starting to look cool.  In retrospect, I wish I had made them a bit bigger so I could really showcase them well.  It’s easier to see in person too. 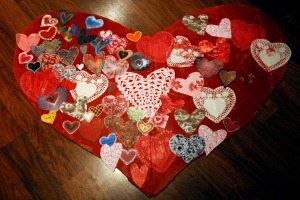 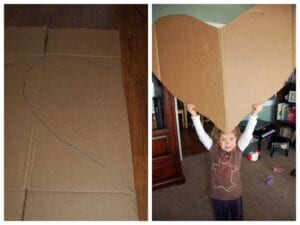 First, I got a big cardboard box and cut out a huge heart. 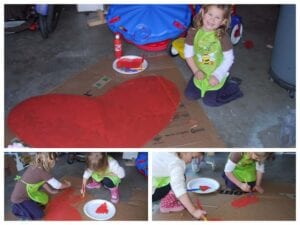 Next, I had the girls paint the heart red. 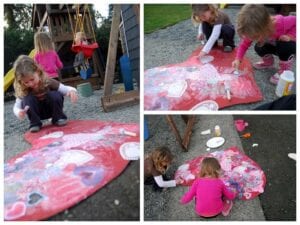 I had some doilies, and I cut a bunch of hearts out that I had found on the internet.  I put these hearts in a Word document, printed them out and them cut them.  The girls then started in on the Mod Podge.  They put the goop on the bottom and then on the top as we created the collage.

I am a new follower and love the intent of your blog! 🙂

I’m glad you’re following along, Holly. I’m a teacher by trade too, so I hope there will be things you can use with your students as well.

Such a cute idea! We may have to try one out with clovers for St. Pat’s day!!
gatheredinthekitchen.com

Love that idea. I may have to do the same. Let me know if you do it.