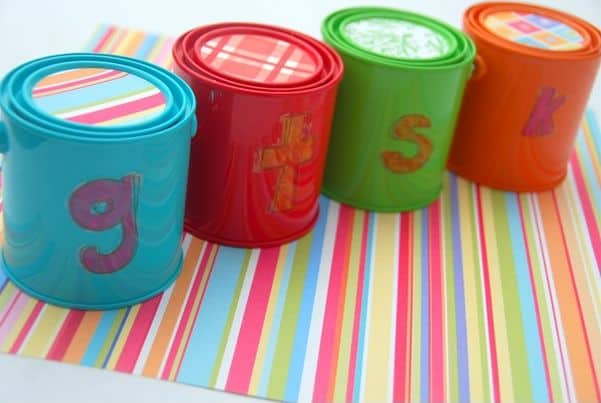 I am wanting to create a bit of an economy in our home.  One of the elements of creating it is to teach my kids what to do with money once they have earned it.  I wanted to make a way for them to have a container for giving, taxes, saving and keeping.  Giving is the first 10% tithe we learn about in the Bible.  This goes to God’s work.  Taxes normally go to the government.  In our house, I guess we would be the government…lovely.  That said, our “tax” is going to go toward a family fun activity. That will also be 10%. Once we’ve earned enough, we’ll do something fun together.  Saving is also 10%.  The remaining 70% is theirs.  They can spend it or save it how they want. G = Giving. T = Taxes. S = Saving. K = Keep for Yourself.
I knew what I wanted to do, but I wasn’t sure what the vessel would be to make it happen.  I found these tins on sale for $0.99 at Michael’s.  I also found some stickers.  I like stickers because they’re easy for preschool hands and fast to put on.  They also stick well.  The process was simple.  I used my handy dandy circle cutter to cut circles out of fun paper for the lids.
The girls used a glue stick to glue the circles down.  Then, they stuck the stickers on the front.  I also used smaller letter stickers to put their names on the back just so we knew whose can is whose.  I considered making it like a bank and cutting a slit in the top, but I was concerned with the dangers of cut tin.  So, we’ll just open the lid and put the money in that way. 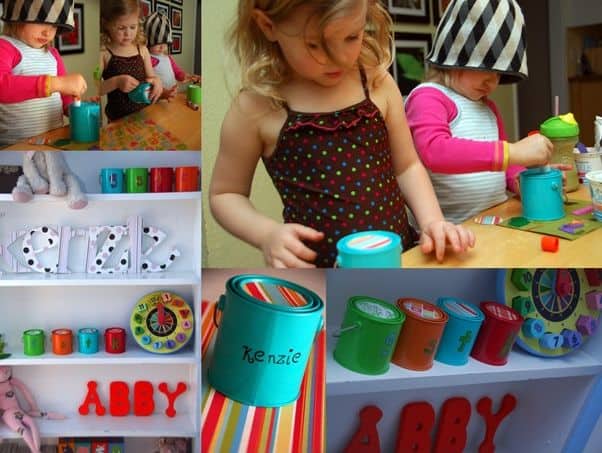 If you are wondering why my daughter is in her bathing suit in the middle of the winter, I have no clue.  It is so her though.  And yes, my other daughter is wearing her dad’s hat.  Crazy ladies.

I love it! Great ideas! I also love their attire! I am working on a post this week about how many times my 4 1/2 year old changes clothes in one day due to the different character changes. 🙂

Oh my goodness. About a year ago, I took a picture of Abby every time she changed her outfit. I have an entire collection. However, I have seen my parent’s photo albums, and I see exactly who she gets it from.

That’s a great idea. And they turned out so cute! It’s so hard to get them to save.

Thanks! We started collecting money in it today, and she’s so excited about it.

What a great idea!

Thanks so much, Jennifer.

Wow, what a great way to teach responsibility along with math. Thanks for sharing on Thinky Linky Thursday!
Lori @ Cachey Mama’s Classroom

Thank you so much for hosting, Lori

I was just looking at how gorgeous and organized their shelves are! LOL! This is a great way to get them to “see” how to wisely use money.

Organized for the photo. I wish it would stay like that. 🙂 Thanks!

SO cute!! My daughter does the bathing suit thing like that too… Its like wishful thinking or something. But I laugh at her! Great job!
Thanks for linking up to Making It With Allie last week! I can’t see what you have for next week!
AllieMakes.Blogspot.com

Thanks so much for hosting us, Allie. Taking the time to come back and comment is appreciated too.

How is this going? Is it easy to implement or did you find it hard to get them to understand they cannot spend it all? I started reading about your chore chart list and came here instead..:} I NEED to find something that works in both of these areas. Have you found a solution?

I think it’s hard for them to look at their money and watch it divided like this. We explain that this is exactly what we have to do as adults and that it is really hard. However, I believe in the benefits of teaching these money issues young. I know I went into credit card debt a bit before I got married. It’s no fun. If I can equip them to better understand these things, I think it’s good. I haven’t been as consistent in a chore chart. Here’s what I think I’m going to try. I think I want to start more manageable. I want to give them one job they are in charge of daily for a week. For example, “You are in charge of keeping the shoe area organized in the front hall this week.” or “You are in charge of wiping down the bathroom counters every night before bed.” Then, I would have one weekly chore – a dusting, folding or vacuuming job. I haven’t started this yet, but that’s what is on my mind right now. They would get an allowance for that and then just have other expectations that just come with being part of the family. I hope that helps.