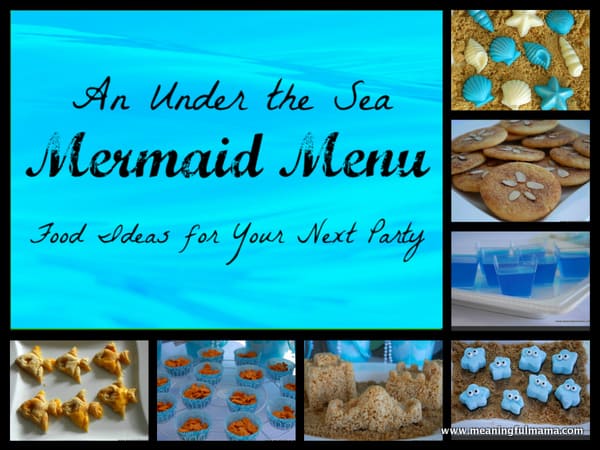 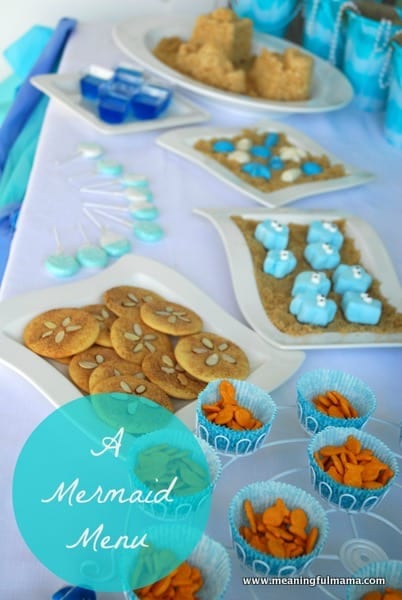 I am offering up my mermaid menu for a mermaid party. Please click through to the party to see how I brought it all together. Here, I want to give you a number of mermaid party food ideas for your own under the sea culinary adventure. I sometimes have a hard time knowing how to break down a party. I like to give you the “how to” tutorial so the party is easy to replicate. I don’t want to do some mega long post with every tutorial, so I thought it might be a good idea to make just one of my posts giving instructions and ideas for the menu of a mermaid party. If you want to know the manner in which they dine, make sure you check out my Mermaid Tablescape. 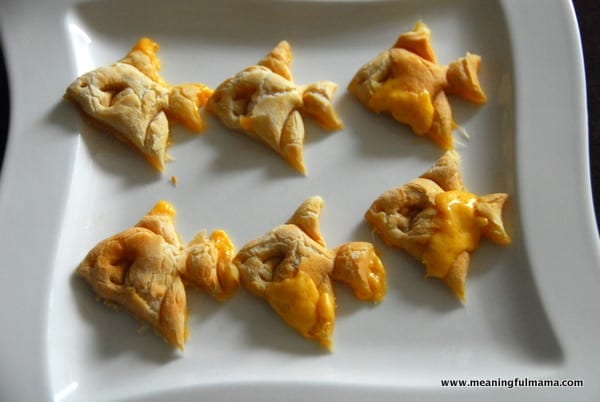 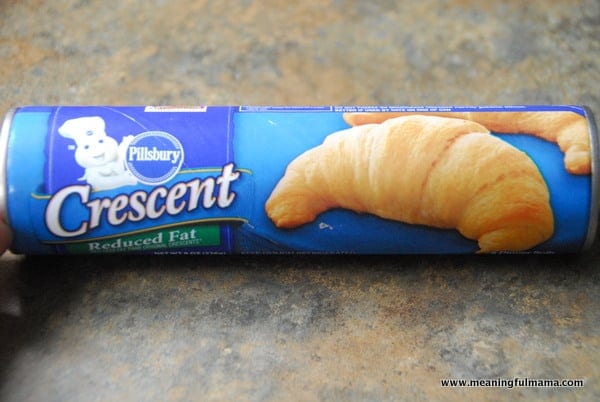 My Crescent Roll Cheesy Fish is my own fishy take on a childhood favorite of mine. My mom used to take crescent rolls, divide the package into two sections, pinch the serrated pieces together, roll it out a bit flatter and layer crescent roll – cheddar cheese – crescent roll (It looks like a big rectangle…I should have taken more pictures). Bake according to instructions. Oh my…so yummy. She used to serve it as an appetizer or snack by cutting it into smaller squares once baked. It is a whole lot of goodness. I decided to use my fish cookie cutter instead of cutting them into squares. I maybe should have let them cool a couple minutes before doing it, as the cheese oozed out  of a few. They were delicious though. 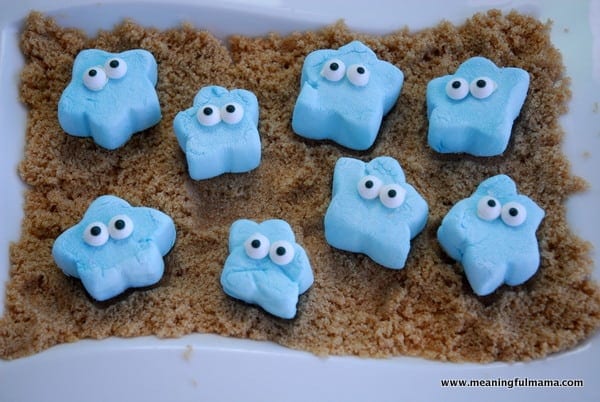 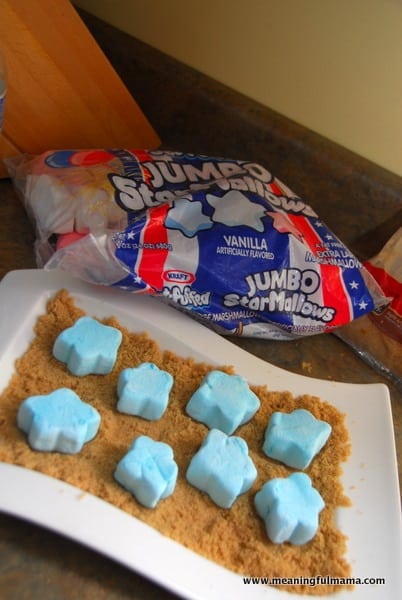 My little Starfish Marshmallows were super easy. I found the star shaped marshmallows at Target – probably a speciality for the 4th of July. I bought little candy eye balls (found in the cake section of my craft store or even in my regular grocery store now) and used a little of my frosting from the cake to attach them to the star marshmallows. I had them resting on a bed of brown sugar sand. 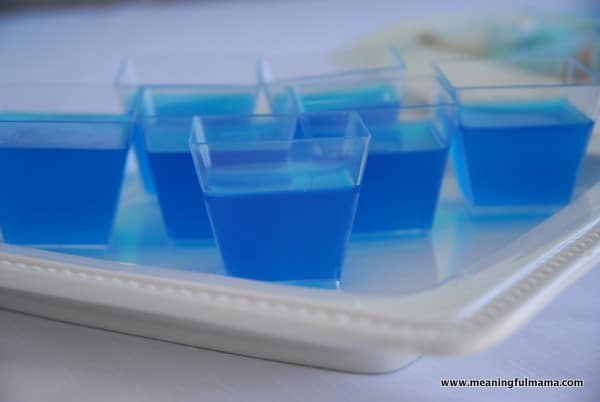 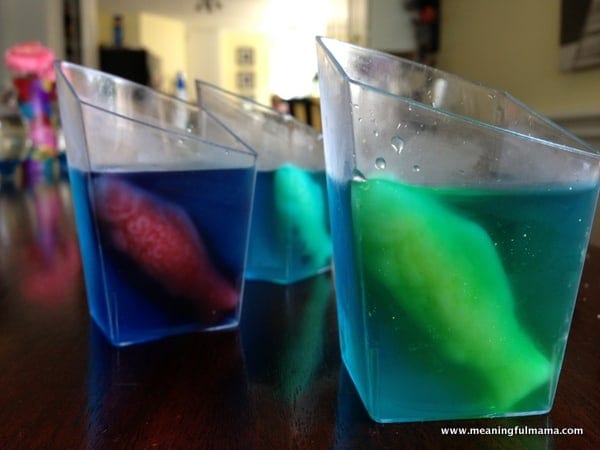 These great mini cube dessert shooter cups can be found at Party City. I made blue jello look like cups of ocean blue water. I tried two methods…just blue jello and then blue jello with a Swedish fish inside. The Swedish fish version just ended up looking like a dead fish, so I opted against it. If you were thinking it was a good idea, I’d advise against it. Also, the Swedish fish end up just turning to mush after a couple days. I’m glad I had a back up plan. 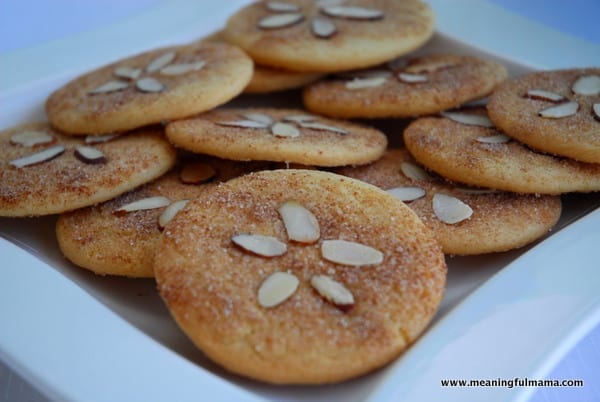 I made Sand Dollar Sugar Cookies. I saw the idea on Pinterest but it originally came from Mama Miss. What a great idea. She has a tutorial on her site, but I can tell you I just used my favorite sugar cookie recipe, cut them into circles, sprinkled them with cinnamon and sugar and then added 5 slivered almonds to the top – all before baking. Thank you, Mama Miss, for the great idea!

Serving Goldfish was probably the most simple food idea. I unscrewed my cupcake tiered stand and just used the bottom layer. I used turquoise blue cupcake holders as the vehicle for serving. 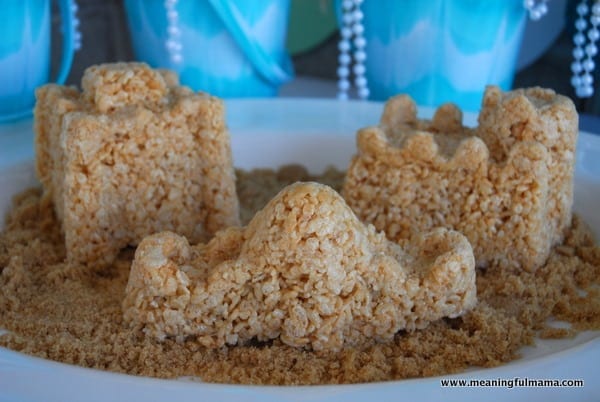 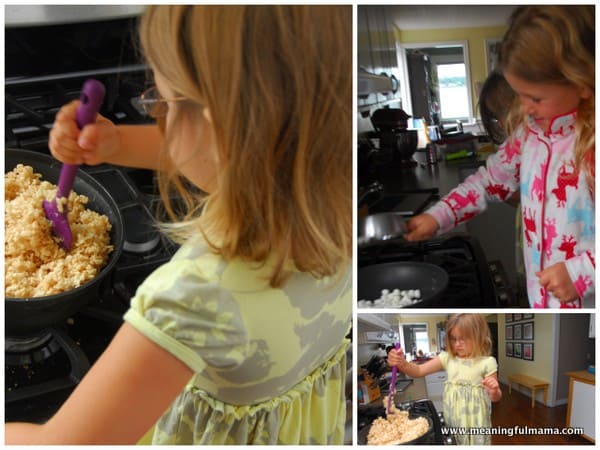 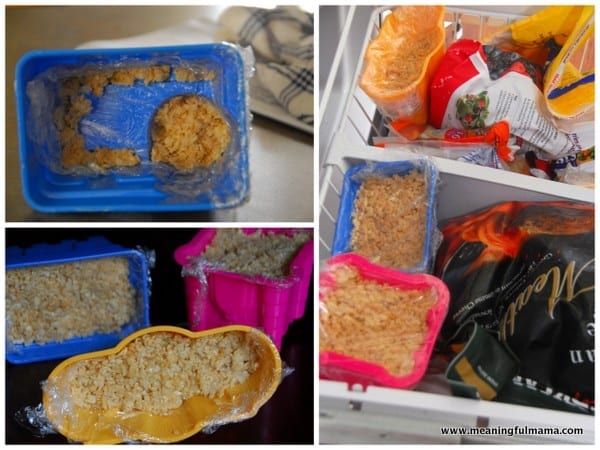 The Sand Castle Rice Krispy Treats were also a hit. I originally got this idea from a great site called Hungry Happenings. I believe I found it at a Link Party and remembered to find it again for the party. She is so creative. I just made plain old Rice Krispy Treats, but she did a fabulous sounding carmel version if you want to check out her ideas. I bought some inexpensive sand castle molds. The kids helped me make the Rice Krispy Treats. I then squished them into the molds. Because the sand castle molds aren’t food grade, I lined the inside with plastic. I made sure to squish the Rice Krispy Treats deep into every crevice first. They were sticky, so I ended up greasing my hands with some Crisco, which made the process easier. I then filled the molds as much as I could. The recipe didn’t quite make enough to fill all three, so they were a little shorter than the mold, but that worked just fine. Did you know you can FREEZE RICE KRISPY TREATS?  Me neither. I did a little research to see how long I could make them in advance since the box says they are best the same day. In reading, someone said you can freeze them. I did. They were fabulous. I just froze them right in the mold. It’s great to find things you can do in advance since right around the party feels a lot more rushed. 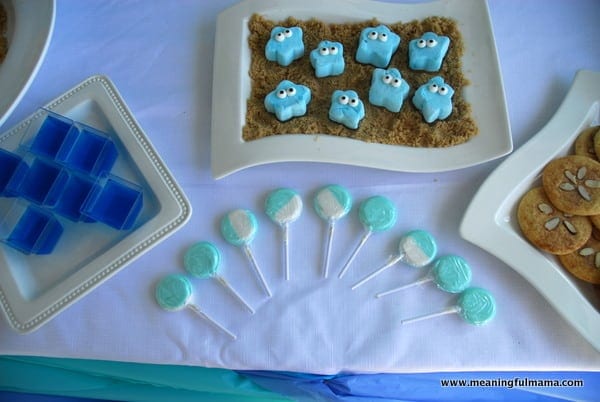 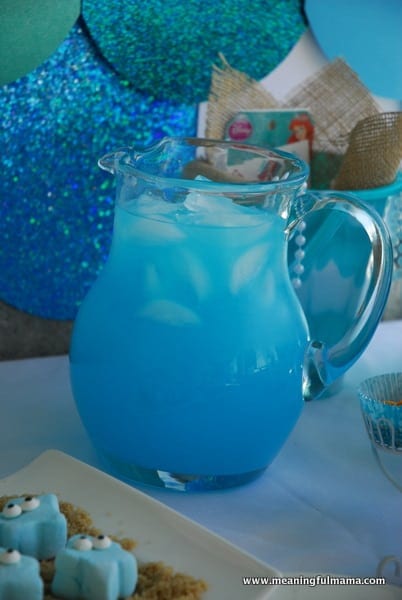 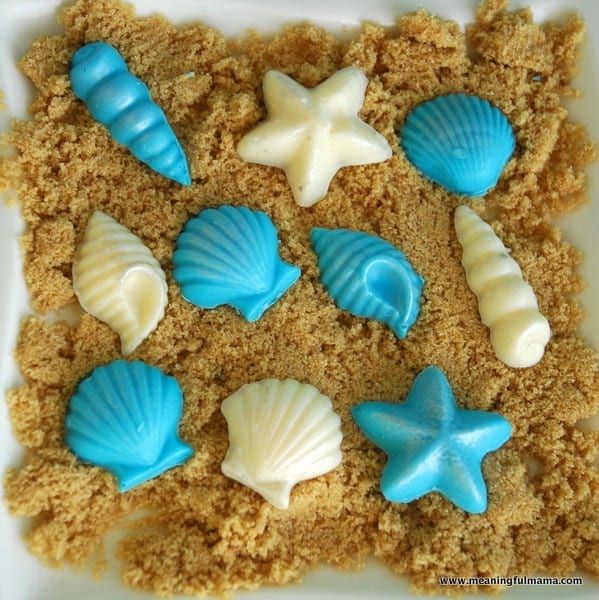 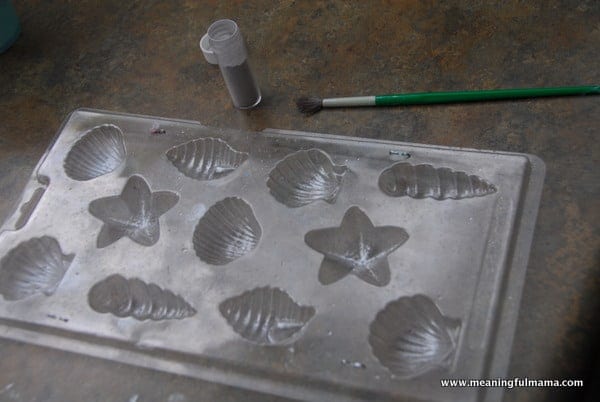 I love doing chocolate melt molds. I hope you have seen my post about the process of working with Candy Melts and found it helpful. Here’s another post that speaks directly to using the plastic molds. They are so easy and can add such a decorative element. Don’t be intimidated. Like I said, they are easyl Something I have never done before is brush the mold with a thin layer of silver luster dust, which I happened to have on hand. It gives the chocolate an iridescent shimmer. Use a clean paint brush to apply a thin layer to the mold and then fill the mold with Candy Melts like normal. I added links to some Amazon products similar to what I had on hand that will help you make your own chocolate shells. Again, this was served on a layer of brown sugar sand.

There completes a mermaid party menu perfect for your little mermaid. This would be great for a beach or under the sea party as well.

I love all of these ideas! The marshmellow starfish, sand dollar cookies, and rice crispies sand castles all look so cute and fun.

Thank you so much! It was a fun party to make food for.

The picture of the crescent fish, the cheese looks like its on top of the crescent layer. Is that how it cooks or do you put more cheese on top? And are the fish served hot or room temperature ? The party looks great, thank you for the images and tutorials.

Hello Nina! I’m so glad you found this post helpful. I should do a separate post with this appetizer idea to give the full tutorial. What you do is keep the crescents stuck together as a roll as you take it out of the package. Unroll it together so you have a long sheet. Divide that in two. Pinch the seams together on the two rectangular pieces you now have. Roll it out a little flatter. Then, you add a layer of cheese, keeping a bit of a border on the edge. Put the other layer of crescent on top, pinching together the sides. It’s now kind of like a cheese pocket or sandwich. The layers are crescent – cheese – crescent. Cook to specified directions. I hope that is helpful. Let me know if you have any other questions.

With freezing the rice krispie treats, how long did you allow them to thaw before the party? LOVE your menu and decor. Great ideas and excited to borrow some. : )

I just took the Rice Krispies out in the morning, and I believe the party was mid-day. I used a knife to slice pieces for the guests. It worked well. I hope you have a lot of fun with it!

loved the sight and information