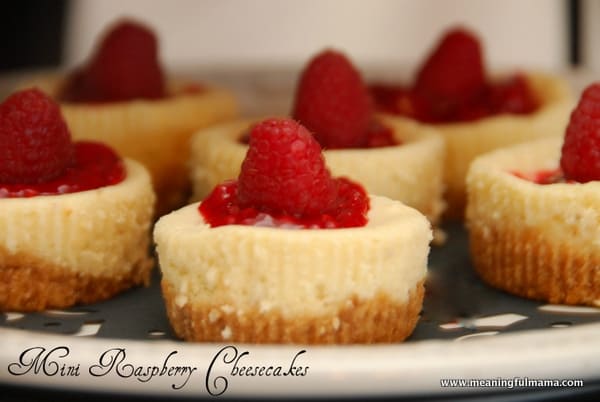 It’s going to be a sweet week here at Meaningful Mama, and I mean literally. Last weekend I hosted a baby shower for a dear friend. It was a dessert shower, so my kitchen exploded into a bakery. What? Do I think I’m Betty Crocker? Apparently. It was dessert after dessert. I’m so glad my kids like helping in the kitchen. I always give them the option to help, and they always want to be involved. Therefore, I don’t have as much mommy guilt while I turn my kitchen upside-down trying to create multiple desserts. I’ll be giving you all of the dessert recipes and then showing you the final baby shower results.

The Mini Cheesecake is something my mom has made a number of times. As I was doing multiple desserts, the idea was to make them all mini so that people could choose a few to try. I’ve always thought it would be fun to create a restaurant or food line called “Bites,” because I always just want a bite of everything on the menu. I have no desire to pursue my “Bites” concept, but if you want to steal it and give me 10% of everything, go for it. I’ll join you on Shark Tank. All that said, these mini cheese cakes are fabulous. It used to be that the Nilla Wafer crust was just a Nilla Wafer. However, as I was having Kenzie stick all of my Nilla wafers into the cups they didn’t fill the bottom of the muffin tin (regular sized muffin tin…no the mini muffin tins). I was perplexed. Looking online, I discovered that others are saying the wafers are being made smaller now. I had to come up with another solution, so I developed a crust. The cream cheese layer is my mom’s recipe (via a dear friend and chef, Lanie), but I added a bit of lemon juice. The raspberry topping I stole from my Raspberry Cream Shooter recipe. I added one raspberry on top. They are amazing. Cheesecake, for me, is always one of the most tempting dessert items. These will not disappoint. 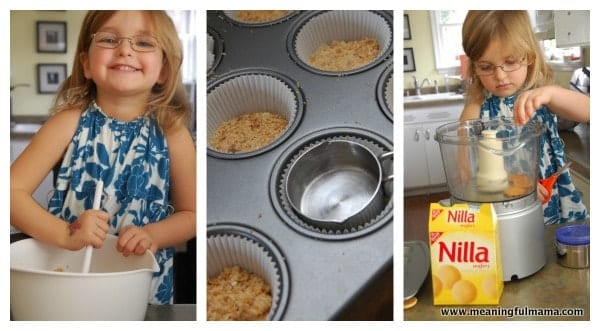 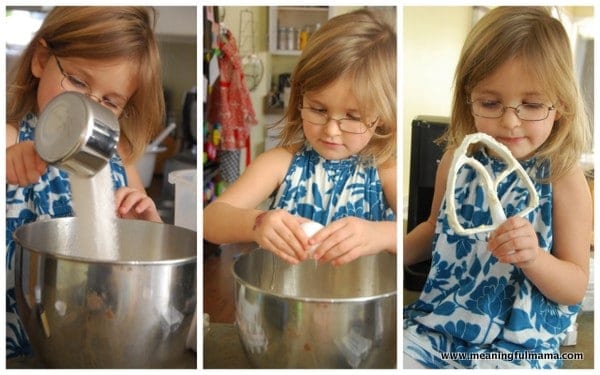 3- 8 oz packages of cream cheese, softened
1 cup sugar
1 tsp vanilla
1/4 tsp nutmeg
3 eggs
1/2 of a lemon, squeezed (about 1 1/2 Tbsp)
In large bowl combine all filling ingredients (cream cheese, sugar, vanilla, nutmeg, lemon and eggs). Mix at medium speed, scraping the inside of bowl until completely combined. Pour mixture on top of Nilla Wafer crust, filling the muffin tins 2/3 of the way full. Bake these at 325 for 18-23 minutes, until set. Set means that the edges puff a bit and the center is a little jiggly. Let cool completely.
Raspberry Topping
1.5 cups frozen raspberries
1 Tbsp corn starch
2 Tbsp fresh lemon juice
1/4 tsp lemon zest
1/8 cup sugar
1/8 cup brown sugar
In a small sauce pan, bring all the ingredients to a boil over medium high heat, stirring until thickened. Raspberries will break down as they cook. Let cool before adding a small spoonful to the top of the cheesecake. 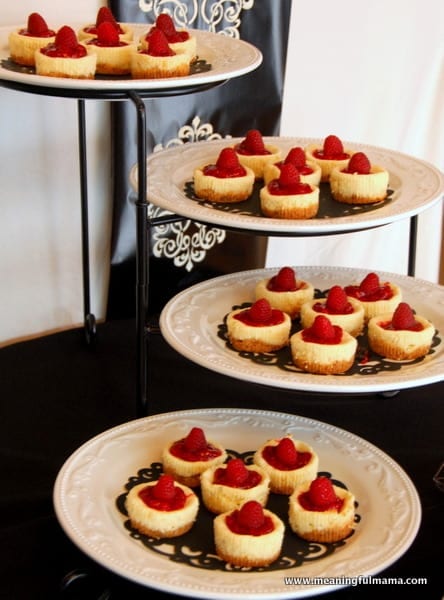 I served these cheesecakes out of the wrapper. They were a hit.

Jodi-I’m going to be making some mini strawberry cheesecakes for a baby shower I’m hosting tomorrow and was wondering how best to get them out of the tin when they are finished. This post is perfect timing, I see I can unwrap them before I serve them and they’ll look just fine. Thanks! H

Yes – I just cooked them in cupcake liners, and I lifted them out pinching the liner from both sides. I made them the day before and then just pulled the wrapper off as I was setting them out. I put the topping on then, but I’m sure you could do it before too. Good luck. I hope all is well, Heather! Let me know how it goes.

How many does this make? Thank you!!

Jodi, How many cheesecakes did this recipe make? They look soo yummy!

I believe this made 24 cheesecakes. I really hope my memory is serving me correctly. I like to write it down in my posts, so I’m sorry I failed to do that! Let me know how it goes!

oh my gosh, they look AMAZING!

Do you have to use liners…..I have the mini muffin tin that that bottom pops out?

I’ve never seen mini muffin tins like that. How cool. I have only done it with liners, so I can answer for certain. I know I’d be nervous about doing it, but I’d love to hear the results if you decide to try. I hope you enjoy these little guys. They’re so yummy!

the pan reminds me of mini springform …..very cool… I will let you know how they turn out…..I will spray the the pan to make it easier for the little cheesecakes to come out……Do you have an email that I can send you a picture when they are done?