You are here: Home / Kids / Character Building / Why Teach Kids to be Respectful?

“‘Honor your father and mother’ — which is the first commandment with a promise–‘that it may go well with you and that you may enjoy long life on the earth.'”
– Ephesians 6:2-3
re·spect [ri-spekt]
noun
1.esteem for or a sense of the worth or excellence of a person, a personal quality or ability, or something considered as a manifestation of a personal quality or ability: I have great respectforherjudgment.
2.deference to a right, privilege, privileged position, or someone or something considered to have certain rights or privileges; proper acceptance or courtesy; acknowledgment: respect for a suspect’s right to counsel; to show respect for the flag; respect fortheelderly.
3. the condition of being esteemed or honored: to be held in respect.
Reason Chosen: Children need to learn respect – respect for their parents, authorities, elderly, themselves, their peers, and their belongings.  Respect is a trait that seems to be missing from many children today.  On What Christians Want to Know, I found it put this way, “There is a difference between obedience and respect. It is easy to get children to obey, but they may do it without respect. However, if you can teach your child to respect you, themselves and others, then teaching them to obey is much simpler. When a child respects a parent then they will obey out of love instead of obligation.”
Word Ring

At the beginning of each week, the craft will be exactly the same because we will simply be adding a new word to our already established word ring. 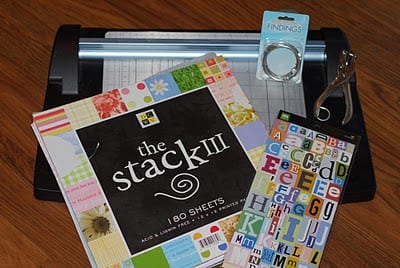 The girls chose a paper style they thought would look good with the letters they chose.  We then I helped them sound out “respect.” They took turns finding the letters we needed and sticking them on the paper…they’re kids – the letters will not be stuck on perfect.  I then cut the paper to the same size as the paper from last week. We punched a hole in the corner and stuck it on our binding clip.  Each week, a new word will be added to the clip in similar fashion.  I then wrote the Bible verse on the back.  If your kids are older, have them do it themselves.  We’ll spend this week learning the word, meaning and memorizing the scripture. 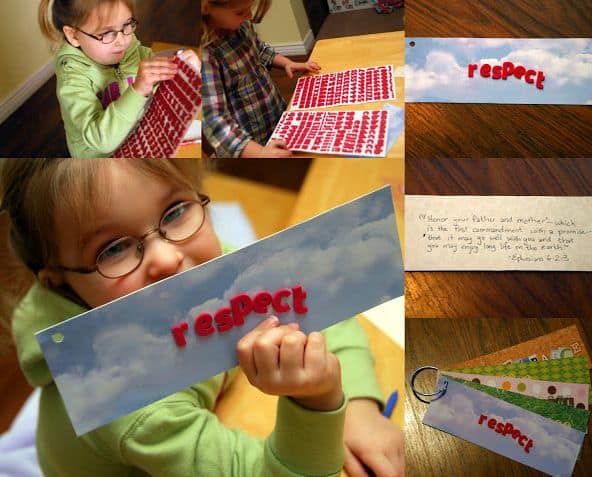