Home » Kids » Character Building » Teaching Kids to Respect their Things
Respect
“‘Honor your father and mother’ — which is the first commandment with a promise–‘that it may go well with you and that you may enjoy long life on the earth.'”
– Ephesians 6:2-3 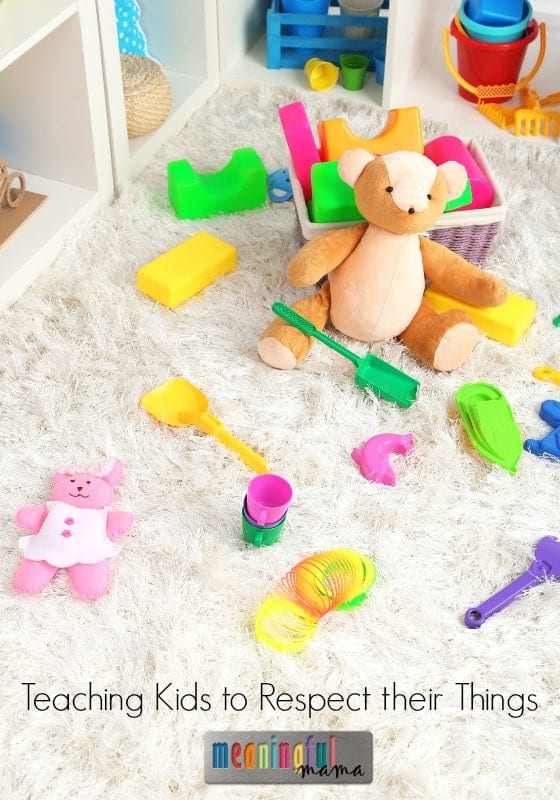 Today’s lesson ended in tears.  That’s how you know it was a good lesson. I mean that a bit as a joke, but a bit as the truth also.  Today we learned about respecting our things.  My children are interesting.  They’re carrying something around, and when they’re done holding it they drop it in place.  They also do not naturally pick up their toys.  I have been trying to train them to have one toy out at a time and then put it away before picking out another one.  The “training” I’ve been doing has been more verbal than anything else and not very intentional. The progress has been slow.  So first thing this morning, we talked about how treating our belongings with respect is important because of how hard dad works to buy these things, and if we just drop them and walk on them we’re ruining them.  We then went around the house picking up the toys that had been left out.  Next, I explained the new rule.  If things are just left out, they would be put in a bin and taken away for a while.  Before nap, I noticed the living room had become a dropping ground again.  I showed them what had been left out and gave them five minutes for a quick clean up.  When the timer was up, I came in and picked up the remaining five things that were out and took them away to put in a bin.  Let the tears come.  Oh, my oldest was upset.  I had taken a couple of her favorite things…or at least one of them became a favorite as it was leaving the house.  She let those tears roll.  I said, “I’m so sorry.  I didn’t want to have to take things away, but you had so many things out that you weren’t able to get them all cleaned up in time.” I then reminded them that we take one thing out at a time and then put it away.  I also told them they’d get these things back eventually and that if they didn’t have a bunch of things out, they wouldn’t get more stuff taken away.
print
Share
Pin21
Tweet
Email
Print

I’ve done something similar with my daughters dirty laundry. I got quite a pile on top of the fridge and she had to resort to wearing her “unfavorite” clothes. It works, though. She is better, not completely better, but better at picking up her laundry and putting it in the dirty basket. Sometimes experience is the best teacher.

We tried the exact same thing but called it the toy fairy. The toy fairy would come after bed and snatch up everything that wasn’t put away. Of course we weren’t consistent and eventually it fizzled out. I think it might have made an impact when the toy supply got REALLY depleted. But we never made it that far. A side lesson for us was seeing just how many toys they didn’t need or care about. Kids these days have WAY too many toys in my opinion. I would recommend this tactic for someone who could keep it up. (As parents of 5 who both work, this, like many cool parenting ideas, never sees its full potential due to chaos.)

Consistency is always one of the harder things. I love the toy fairy idea. I might have to steal that one. It’s so true that there are many toys they don’t need or care about. I would say the toy fairy would come and gather toys to take to kids that don’t have them and then donate them to some meaningful cause. I love it.

Ah we have a Henry Hoover and if she hasn’t picked up all of her ‘treasures’ aka cr@p Henry makes a beeline for it.
It really worked for about a year 2-3 but now I take a carrier bag and start filling it with her stuff, she’s not that emotionally attached as there’s no tears just resistance but eventually she’ll yeald and collect things especially with the Barney song or Dora the explorer tidy up song playing.
Then when she’s asleep I tip the carrier bag out into her toy box.
Maybe I need to hide them a while longer…

I’ve found a lot of success in hiding them longer or getting rid of them completely. Of course, I say that as I can’t even walk in my daughter’s room right now. The moment we let it slide, it’s back to square one. It’s not in her nature. That said, I don’t think it was in mine as a kid either, and now I get it and can keep things tidy. I guess it’s a lifetime pursuit. I have learned that in our small home and lives, less is more. Kids can have too much stuff, and it can feel completely overwhelming.

This idea is great – I love the tidy fairy idea too! My kids have way too much! We have a large family both my side and my husbands and even one small gift from each member soon adds up. For first few years of my daughters life, we put money in a savings account for her at birthdays and xmas and only bought a few small bits for her to open so we may go back to this as they get so much ftom others its overwhelming!

Thanks so much! I love gifting experiences too. Giving the gift of time has been more meaningful than all the stuff. After Christmas, I’m feeling like we need to get back on top of purging and respecting their stuff. Thanks for commenting.

I also teach my youngest daughter,3 to respect things,from throwing biscuit and chocolate wrappers in the bin after eating to organizing her toys after playing.I observed it even raises her confidence level

That’s fabulous. It is in those daily things, isn’t it? Thanks for weighing in.