This family Halloween costume idea was super fun. With ideas for original cast of Willy Wonka, Violet Beauregarde, Veruca Salt, and Mike Teavee, you should be all set as you plan out your own Charlie and the Chocolate Factory costume theme.

If you love dressing up your family as much as we do, you also might want to check out some of our other family costumes. We have done Inside Out, Make Believe, Muppets, Candy Land, Super Heroes, Fishermen, and Race Car Drivers. Here and here are even more costumes we have done. Can you tell we love to be in costume? 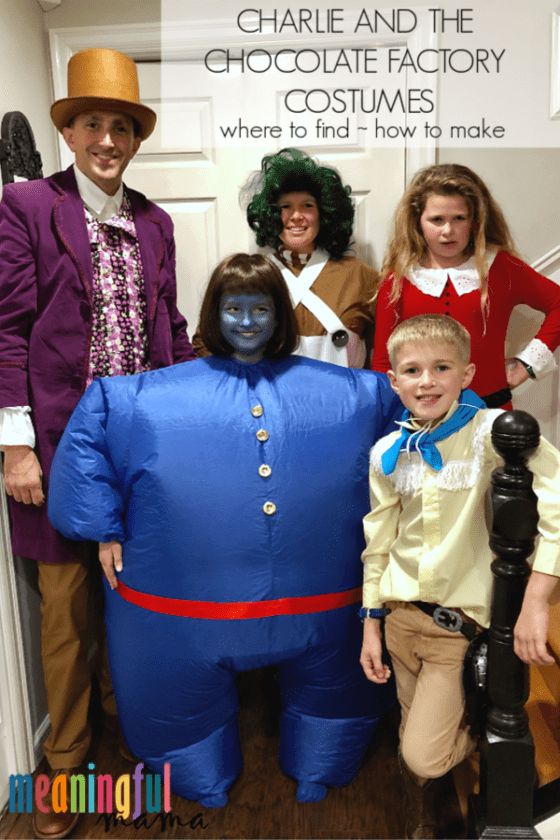 We were very motivated to do Charlie and the Chocolate Factory as a family costume idea after seeing  inflatable suits last year. I hadn’t seen the Violet Beauregarde version. That said, when I saw the concept of a blow-up suit a light bulb went off. That’s what we would be.

Since deciding, I realize that we aren’t the only one to use the blue blow-up suit as a blueberry costume for Violet Beauregarde. I was super excited how ours turned out though.

Not only that, but I love the whole theme. Due to my own nostalgia with the movie, I definitely wanted to go with the original cast of Charlie and the Chocolate Factory. I just can’t find it in my heart to love the new one as much.

Some of these costumes are purchased. Others were made. For your convenience, I will be adding affiliate links, normal links, instructions and tips for each costume. 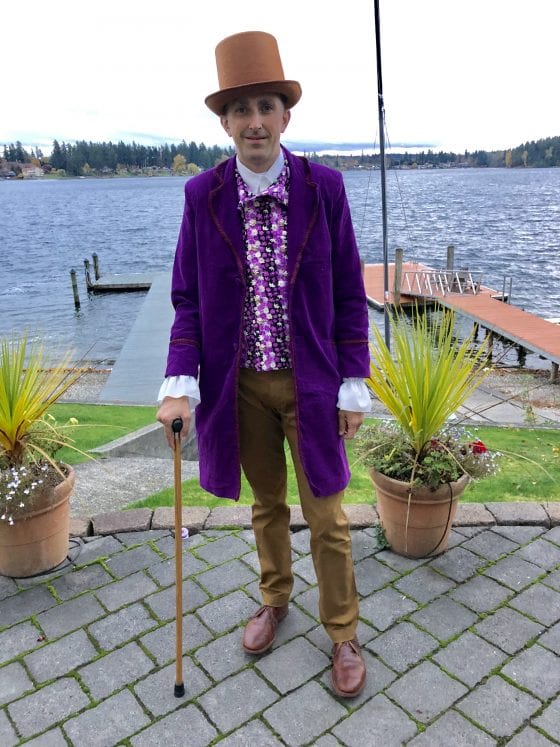 This costume was purchased.

One thing to note with Halloween costumes is that they hold their value. Before next season, you can earn your money back by selling them on EBAY, Offer-Up, Facebook Marketplace, Thrifty Chic or Craigslist.

Here is what you will need to create the look for the original Willy Wonka costume. 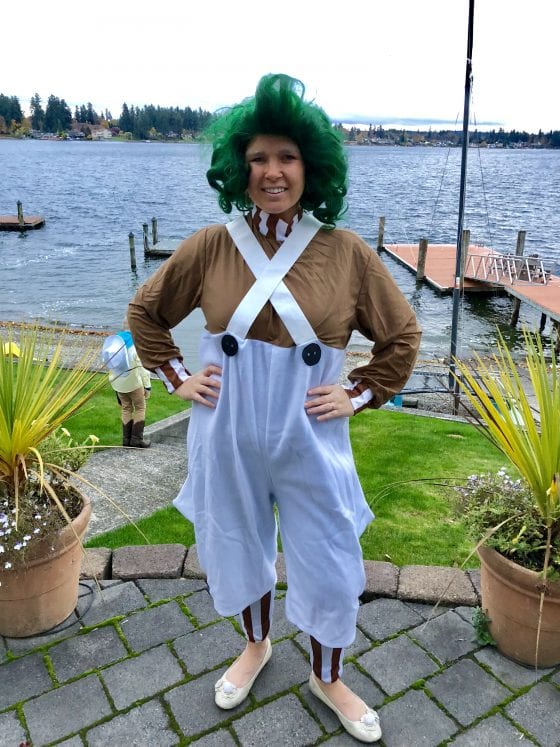 The Oompa Loompa costume I borrowed from my brother-in-law. How convenient to not have to purchase anything. However, I have a feeling you do have one of these sitting around. 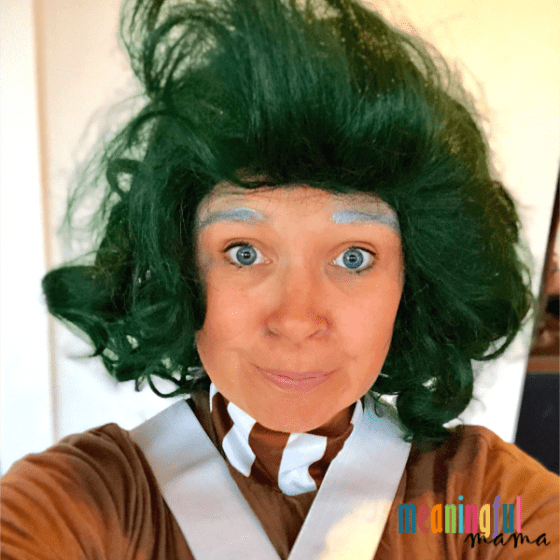 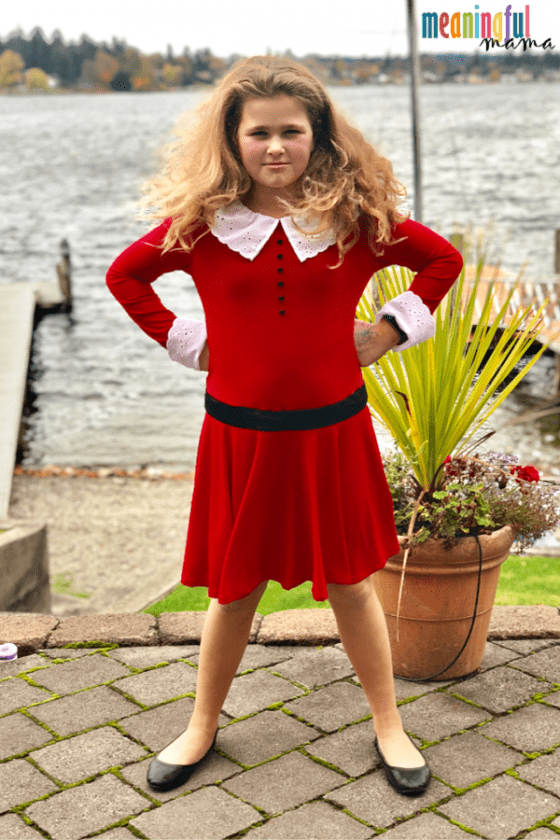 We are so blessed to have a grandma who can sew. She made this outfit to fit my daughter, who obviously really got into her role as Veruca Salt.

Here is what she said she did:

The pattern is McCall’s 7428 – top, skirt, tunic, dress and leggings

She used mostly view B of the pattern, but she also used skirt view D because view B was longer in the back. View A was used for the long sleeve.

She just made up how to add the black band and facing for the cuff.

The red fabric was a polyester jersey knit

The buttons were from her bin so they’re probably 20 years old! The buttons just need to have a back shank. The collar and cuffs are large eyelet trim. 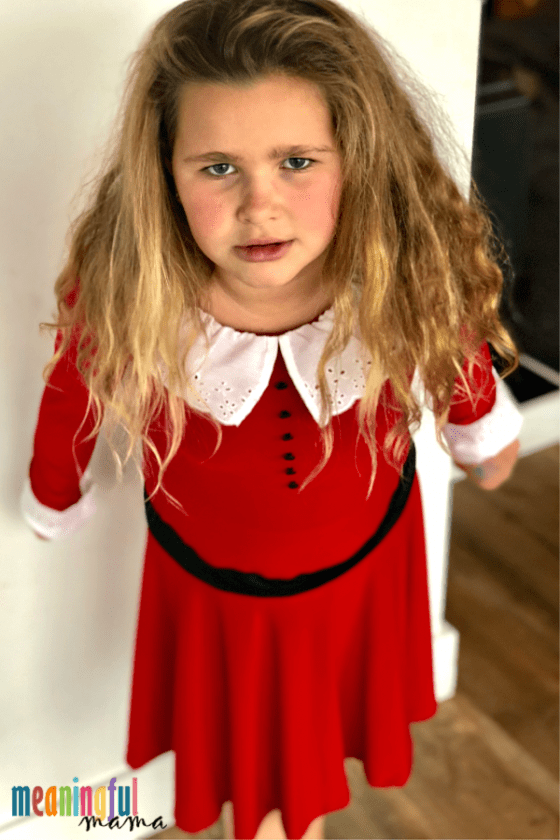 I wasn’t ever convinced I could beat Kenzie’s Muppets Animal costume, but I’m pretty in love with her Violet Beauregarde blueberry costume. Seeing a blow-up costume, after all, was our inspiration. 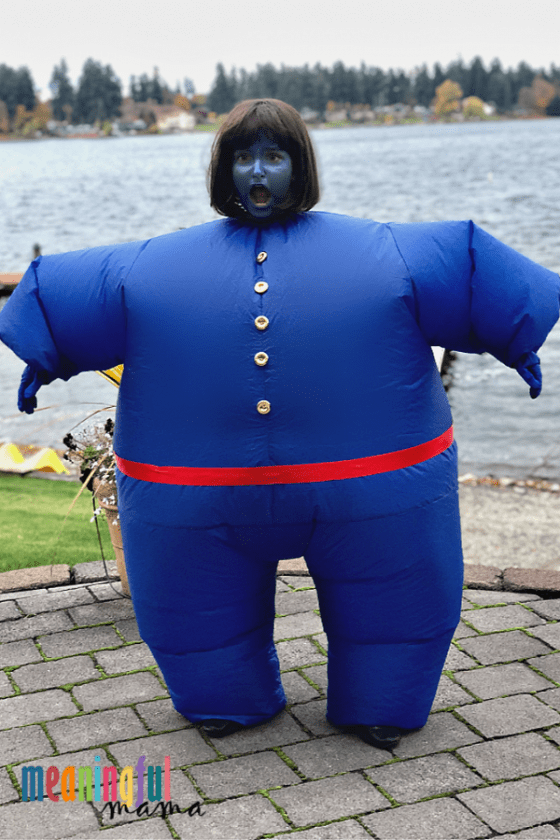 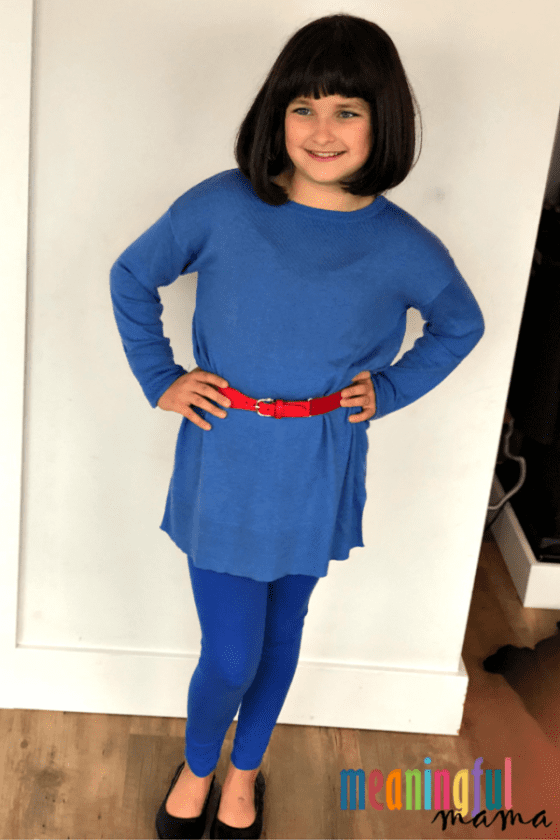 Kenzie knew she might not want to stay in the full blow up costume the whole night, so we had plan be (pre-blueberry) underneath. She was right.

A blow up costume might just slow you down when you are running around town with 33 – 33!!! other friends. We had a total of 46 going trick-or-treating. Too fun!

For the underneath look, we simply had royal blue leggings

(found at Target – link to something that would work), and a red girls belt 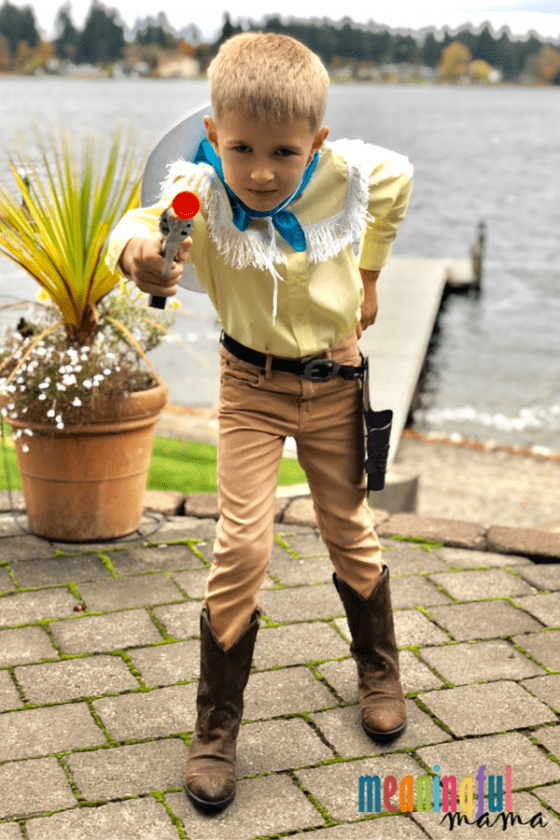 Our Mike Teavee costume is semi-homemade. By adding a few embellishments to a yellow shirt, we achieved the look pretty simply. 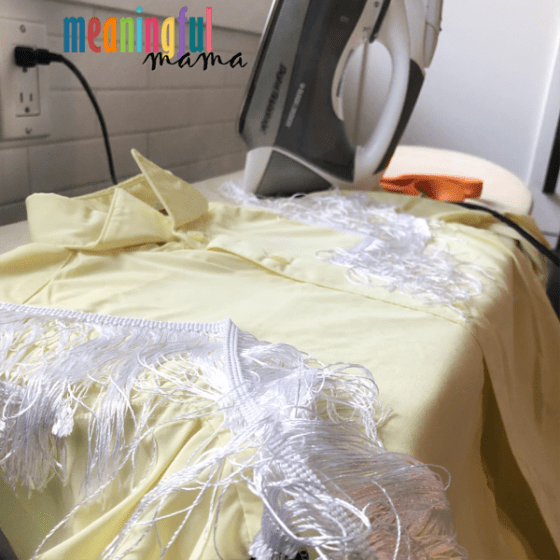 Next, I started about about 3 1/2 inches down from the collar and cut a 3 1/2 inch piece of the fusible tape going straight from the outer edge of the button strip to the right.

I worked my way from there, going up and over the shoulder, down the back, straight across the back, and back up the other side. I finished it off coming right back to the other side of the button strip.

This process was done section by section. The process would be:

The final step was to trim the fringe to my desired length. Ours was 2″ long. 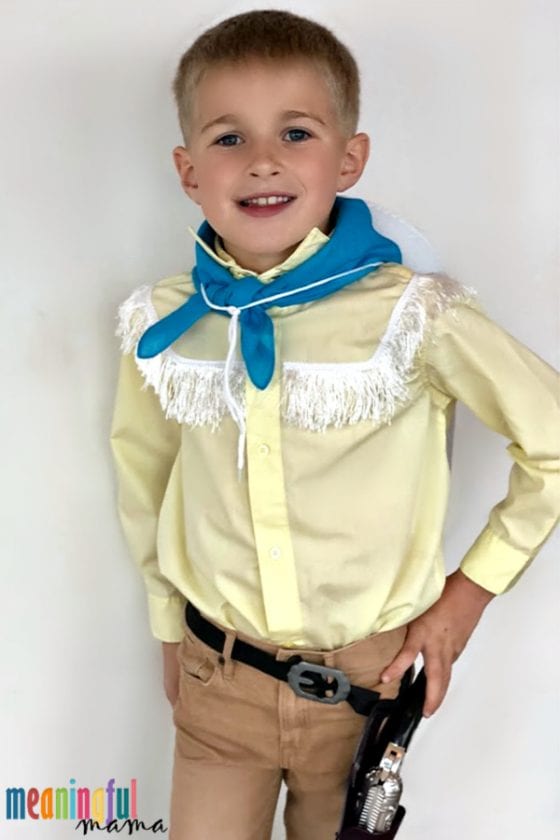 So, there you have it. It was our Halloween 2018 with The Original Charlie and the Chocolate Factory DIY Family Halloween Costumes.

I hope was able to provide all the information you need if you are looking to do your own semi-homemade Charlie and the Chocolate Factory Costumes. 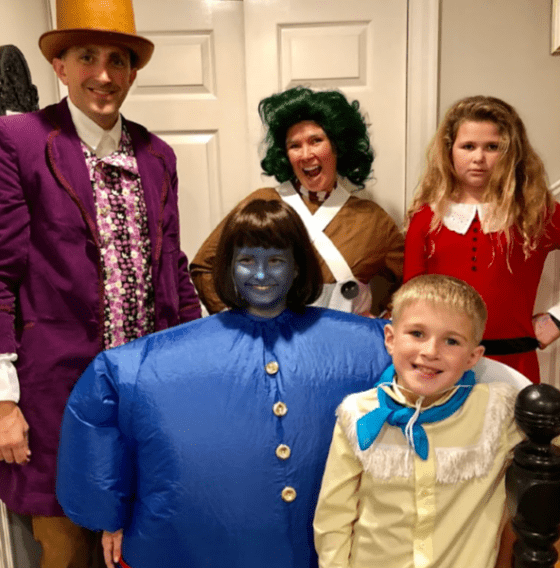 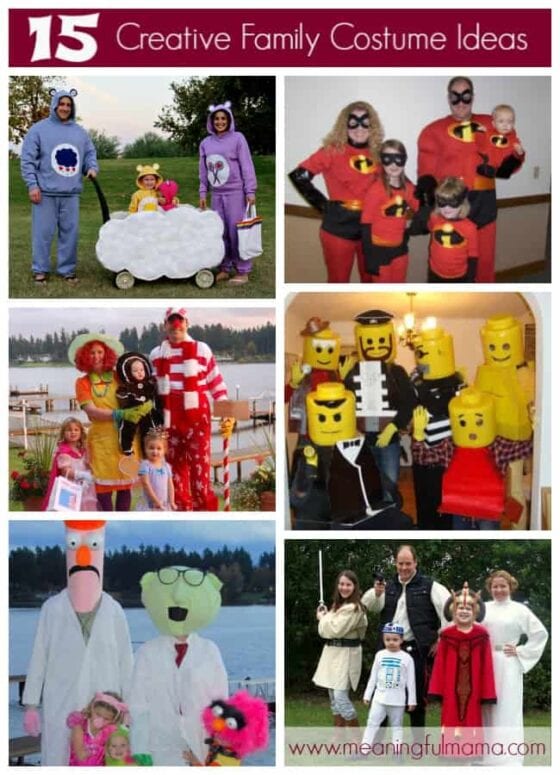 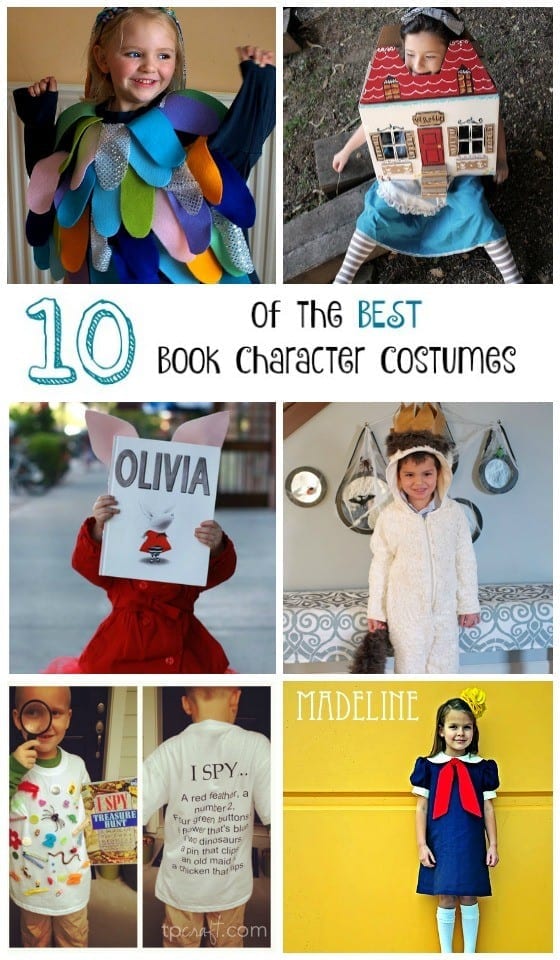 10 of the Best Book Character Costumes

Thanks for letting me know. 🙂

Hi Jodi,
I really love your AMAZING Family Willy Wonka Themed Halloween Costumes. I my favorite is your daughter as Violet Beauregarde!! Do you have any videos of her inflating and deflating in her AWESOME Inflatable Blueberry Suit?

Thanks so much. No…I totally should have done video. I can’t believe I didn’t think about that. Thanks for the compliment. It remains one of our favorite costumes.

Hey< Jodi I’ new here, going to do a play. I need an alternative to the inflatable costume.

Hello! In the post you will see an alternative below the inflatable one in the individual pictures. We just went to a second hand store and found a long sweater, red belt and blue leggings. Hope that helps. Have fun!

Hi!
I love your Willy Wonka costumes! I’m interested in the Willy Wonka one. I can’t seem to find the more expensive one. Can you please help? How much was it?
Thanks.
Traci

I’m going to email you directly about this. 🙂

Actually, your email went away once I responded. Could you email me at jodi@meaningfulmama.com or put your email in the comment section. Sorry for the inconvenience.